American naval officer, was born in Rockaway, New Jersey, in 1788. He was appointed a midshipman on 12 November 1810 and saw his first action during the War of 1812-1814* in the USS President, Captain Stephan Decatur, in engagements with the British frigates Little Belt in May 1811 and Belvidera in 1812. In late 1813, he was part of a prize crew of a ship which President had captured a few miles off New York, and was held prisoner briefly when the prize was retaken. In 1814, he was ordered to serve on Lake Champlain. As third lieutenant in USS Saratoga, he came under heavy British gunfire on 6 September 1814, when he was ordered to deliver messages to the commander of the galley Allen. Severely injured and initially reported as mortally wounded, Duncan lost the use of his right arm and was hospitalised, preventing him from serving in the American victory in the Battle of Lake Champlain five days later. Despite this, his bravery in the campaign leading up to the battle was formally recognized by Congress in 1826 and he was retrospectively awarded the silver medal for the battle. Having recovered from his wounds in 1816, he returned to sea duty in USS Guerriere, Captain Stephan Decatur, in the Mediterranean and participated in the capture of two Algerian vessels with a share in the prize money which resulted. Between 1816 and 1819 he served in USS Independence, the USS Cyane on the African coast in 1822-23 and commanded the US schooner Ferret during anti-piracy operations in the West Indies in 1823-24. On leave of absence from 1824 to 1829, he served on the receiving ship Congress at Norfolk, Virginia, for two years before being ordered on 18 March 1831 as commander of the sloop USS Lexington for duty with the U.S. South Atlantic squadron 'to protect our citizens and Commerce, and particularly to protect the American fisheries in the Southern Ocean'. 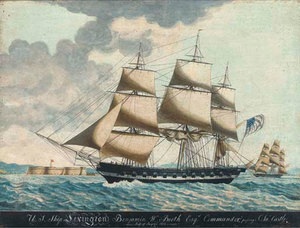 The United States government's concern about Louis VERNET's proclamation which prohibited foreign vessels from fishing and sealing around East Falkland came to a head in late 1831, when Vernet's men captured several American ships. Hearing of these incidents at Buenos Aires in late November from Captain Gilbert R Davison of the captured schooner Harriet of Stonington, Connecticut, Duncan and Davison met the US Consul, George W SLACUM. First, Slacum sent a note to Argentine Foreign Minister Manuel de Anchorena, demanding that Argentina give restitution for the captures and stop further harassment of American shipping. When no satisfactory reply was received, Duncan sailed from Buenos Aires on 9 December with Davison on board as his pilot and arrived at Port Louis on 28 December. Duncan investigated the individuals involved and reported to Washington, 'finding them to be of the most iniquitous and illegal character, I determined to break into and disperse this band of pirates, many of whom had been sent from the prisons of Buenos Aires and Montevideo....' On 1 January 1832, with Lexington's guns ready to fire, the ship's party of US Marines liberated the remaining Americans held prisoner and, on Davison's identification of the responsible individuals, captured Matthew BRISBANE and six others employed by Vernet. In addition, Duncan embarked 38 members of Vernet's colony, principally of German extraction, who reported that Vernet had deceived them and asked to be returned to Montevideo and Buenos Aires. Before departing from Port Louis on 22 January, Duncan found a schooner which Vernet had apparently been fitting out to attack American fishing vessels and ordered Davison with two seamen to proceed in her to Staten Island to rescue seven American seamen who had been marooned there by Vernet's capture of the American schooner Superior of New York. Duncan's actions created a storm of protest from Argentina, but Secretary of the Navy Levi Woodbury notified Duncan that President Andrew Jackson 'approved the course which you pursued, and is much gratified at the promptness, firmness and the efficiency of your measures'.

In August 1832, Duncan left USS Lexington on a leave of absence to settle some family business affairs. While on leave he died at White Sulphur Springs, Virginia, 14 September 1834.