US admiral, was born at Fort Johnson, Wilmington Harbour, North Carolina, on 11 March 1822, the son of Samuel Spotts, a major in the US Army who had gained fame in command of the artillery under General Andrew Jackson in the battle of New Orleans against British forces in January 1815. 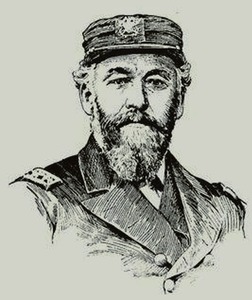 326 The admiral who remained.

Through his father's connections, James Spotts gained an appointment as a midshipman in the US Navy, and initially served at sea with the East Indies Squadron during the punitive expeditions to Sumatra, then attended the Naval School at Philadelphia in 1842-43.

In the War with Mexico, he served on the Pacific coast off Mexico and California. He commanded the paddlewheel steamer USS Michigan on the Great Lakes in 1855-57. Although born in the South, he remained loyal to the Union during the Civil War during which he commanded three ships in the Gulf and South Atlantic blockading squadrons and, in command of USS Pawtuxet, actively participating in the bombardments and landings at Fort Fisher in 1865. 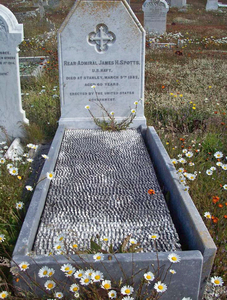 Promoted to rear-admiral in May 1881, he took command of the US South Atlantic Station in July 1881.

Shortly after assuming command, he began a cruise to visit the ports frequented by American vessels in the South Atlantic. In the course of this, he visited Port Stanley on board his flagship USS Brooklyn and called on Governor KERR.

While Kerr was returning the call on 9 March 1882 and seated in the admiral's cabin, Spotts ruptured a vessel in his brain and collapsed; he died the same evening. 'An extremely amiable and pleasant gentleman', Kerr reported sadly to the Colonial Office.

Spotts was buried in Stanley cemetery.

In 1896 his body was exhumed and taken back to San Francisco for burial: a tombstone remains in Stanley.