Argentine commandant, was French, but little is known about him. His date of birth is not on record, and his Christian names are also in doubt. The historian Paul GROUSSAC, also of French origin, refers to him as Juan (or Jean) Mestivier. As is the Argentine custom, his Christian names have been hispanicized in Argentine literature. He is first mentioned campaigning with the 7th cavalry regiment near Bahia Blanca (against the Indians) as a first lieutenant. In 1828 he was promoted captain, and apparently brevet major on 28 December 1829. He married a local lady, Gertrudis Sanchez. 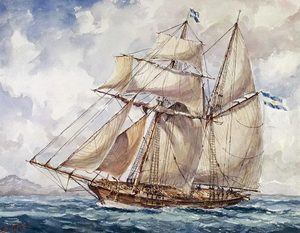 The schooner Sarandi sailing off the...

With VERNET unwilling to return to the Falklands after the Lexington Raid, Mestivier was appointed by President ROSAS interim Comandante Politico y Militar on 10 September 1832. This was published in the British Packet and Argentine News on 15 September and was the only lawful and correctly gazetted appointment of an Argentine commandant of the Falklands. It was a direct snub to the Americans, whose negotiator, Francis Baylies, had despaired of reaching a solution to the disputed fisheries of the Falklands after the Lexington Raid and was preparing to leave Buenos Aires. But more importantly Mestivier’s appointment provoked a diplomatic protest dated 28 September 1832 by the British minister in Buenos Aires, Henry Fox.

Mestivier sailed for the Falklands on 23 September on the schooner Sarandi, with his wife in an advanced stage of pregnancy - shortly after they arrived on 6 October 1832 she gave birth. On 10 October Mestivier claimed the Islands again in a formal ceremony. With him he brought a motley garrison of 25 troops, and their wives and children; some of the troops were criminals sentenced to service in the army. The Negro sergeant, Manuel Saenz Valiente, had earlier murdered the commander of the Argentine garrison on the island of Martin Garcia in the River Plate. A handful of Vernet’s men came as well: William DICKSON and Henry Metcalf among them. Mathew BRISBANE also came - but as pilot on the Sarandi, not as a Vernet employee. 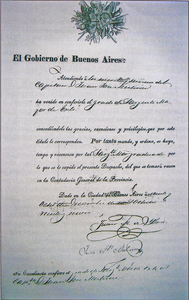 Mestivier imposed harsh discipline on his men. The Sarandi left on patrol on 21 November and on 30 November, just nine weeks after his arrival, a mutiny broke out, fuelled by drink. No reliable details appear in the main Argentine history books. But Mestivier was murdered on the threshold of his house (Vernet’s house) by four of the mutineers, who shot and then bayoneted him. His young wife saw it all and was left traumatised. His second-in-command Adjutant Juan Antonio Gomila, who was implicated in the mutiny himself, then installed himself in that house - to the horror of Mestivier’s widow, with whom he proposed to share a bedroom! One Argentine historian (Antonio Monatarcé Lastra) reports that the mutineers also murdered the couple who ran the bar. They next seized the best of the establishment’s horses and left. Mestivier was buried a few hours after he was killed, but his grave is not marked.

The mutiny was witnessed by the crew of the British sealing schooner Rapid, which was undergoing repairs in the Carenage at Port Louis. The French whaling vessel Jean Jacques arrived the next day. The crews of the Rapid and Jean Jacques took Mestivier’s widow on board to protect her. Then, gauchos and armed men from the Jean Jacques surprised the mutineers near Estancia. They were put in irons on board the Rapid.

The Sarandi arrived back late on the night of 29 December 1832. Next morning, its commander José Antonio Pinedo took control of the situation, and began an investigation. But the British warship Clio (Captain ONSLOW) had already re-claimed the Falklands at Port Egmont, and arrived off Port Louis on 2 January 1833. Onslow urged all civilians to stay, but told the Sarandi and the remaining garrison to leave, which they did on 5 January. The Rapid sailed with them taking the mutineers to Buenos Aires. Two of Vernet’s gauchos and their wives are known to have left then also, and three other gauchos probably went too.

In Buenos Aires the British repossession of the Falklands caused an immediate governmental protest. Mestivier’s murderers were tried and seven condemned to death. The British Packet and Argentine News covered the sentence and execution, describing how the mutineers were shot on 8 February in front of the garrison of the capital and their bodies afterwards hung up on a gallows for four hours. Mestivier’s widow bitterly criticised the relative clemency accorded to Adjutant Gomila whom she - and others - considered just as guilty. Two other men were sentenced to flogging and imprisonment, which they served by extending their service in the army, a common practice in those days.