storekeeper, was one of four brothers (the others were Tomas, Samuel and Diego) from Dublin who settled in Argentina early in the nineteenth century. Several of them worked for Louis VERNET and William joined the settlers at Port Louis in 1828. 'An Irishman who had been a gaucho and had come to the island in Don Vernet's debt', reported a Britsh visitor, 'had not only paid it off [through gaming] but had been enabled to give him seven hundred and fifty dollars for a building which he had converted into a store'. The store flourished. During the Lexington raid in 1831, the US Captain DUNCAN personally went to Dickson's store and removed sealskins from an American ship which had been deposited there and destroyed rabbit skins which Dickson had collected. 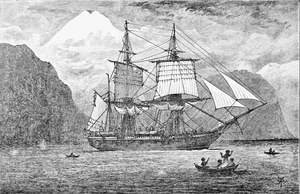 HMS Beagle in the Straits of Magellan...

When Captain ONSLOW took possession of the Islands in January 1833, Dickson was 'apparently the most respectable' British subject and was entrusted with the Union flag and 25 fathoms of rope with which to fly it. He did not inspire naval officers with much confidence. Onslow remarked: 'I did not think Mr Dickson of sufficient consequence to be placed in a responsible situation, but I had no alternative.' Captain HOPE suspected he might help to slaughter and sell the cattle. Dickson remarked that he might return for a spell to Buenos Aires, provoking a faintly absurd instruction from Hope on how the flag should be treated in Dickson's absence. Dickson came aboard HMS Beagle in March and DARWIN, who described him as the English resident, commented: 'what a strange solitary life his must be'. BRISBANE returned to Port Louis on 3 March to assume charge of Vernet's interests. A log for the settlement, largely of wind and weather, but with incidents recorded, is attributed to Dickson, but was probably written by Thomas HELSBY.

But both Brisbane and Dickson were murdered on 26 August 1833 by the gauchos led by Diego Antonio RIVERO. Vernet informed Dickson's mother Ellen in Dublin and his stepfather a barrister.