was probably born in England, and is thought to have been related to James Gooden Helsby, watchmaker and silversmith, who had a business in Buenos Aires between 1821 and 1831 and between 1843 and 1853. 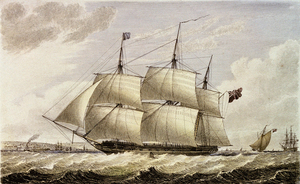 Thomas Helsby arrived with his wife and family, perhaps for the first time, in the River Plate on the Sarah Bickett, Captain A Cook, landing in Montevideo on 18 June 1832. Soon afterwards he travelled on to Buenos Aires where he found employment with Matthew BRISBANE as his clerk. Brisbane was appointed by Louis VERNET to administer his business interests in the Falkland Islands. So in February 1833 he travelled there, taking Helsby with him. They arrived on 3 March.

During the following six months animosity grew between Brisbane and the European colonists on the one side and the gauchos and Indians on the other. It reached the moment when on 26 August 1833, eight members of the workforce rebelled with such violence that Brisbane and DICKSON and others were attacked and killed by a group under the leadership of Antonio RIVERO.

Helsby witnessed these events and was himself on the point of being killed but his life was saved by one of the rebels, Juan Brasido. Helsby kept a diary of those dramatic days, covering the period from the day of the assassinations to the moment when, in January 1834, the surviving members of the group were rescued by the crew of HMS Challenger. This document still survives in the Falkland Islands Archives.

Helsby and others were taken by HMS Challenger to Valparaiso, arriving there on 16 February 1834. In time he returned to Buenos Aires, and was reunited with his wife and family. On 20 January 1835 they embarked on the ship Emma, bound again for Valparaiso, where it is thought they made their future life.