bishop, was born in Chittor, India in 1867, the son of Lt Gen William Blair, of Madras. After spending his university years at Cambridge, (where he obtained an MA and later an honorary doctorate in divinity) he was ordained in 1892 and served as Curate of Portman Chapel from 1892-5. After a further seven years as Rector of Chalgrove and Vicar of Langley, he returned to India to serve in a series of chaplaincies until 1906. He was then Chaplain of the Church Parochial Mission Society until 1910. 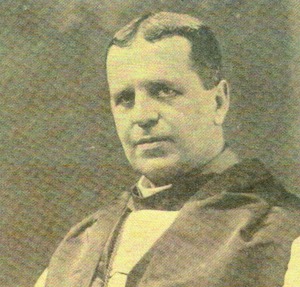 His appointment as third bishop of the Falkland Islands was one of the results of Bishop EVERY's scheme to divide the South America region into two dioceses. Blair was named as the new Bishop of the Falkland Islands, with episcopal oversight of Anglicans in the Falkland Islands, Tierra del Fuego, Chile, Peru, Bolivia, Ecuador and part of the States of Colombia. He based himself in Valparaiso, in Chile. The task Blair faced proved to be too much for him. The reduced diocese for which he was responsible seriously lacked financial resources, so he was forced in 1911-12 to return to England to look for funds. In 1912 he wrote to The Times threatening to resign unless £100,000 was raised. But the response did not match his hopes. He returned to South America but resigned in 1914. During the war years, 1914-19, the Diocese of the Falkland Islands returned to the jurisdiction of Bishop Every, until the appointment of Norman de JERSEY as fourth bishop.

Blair was unfortunate in not having the personal wealth of Bishop Every to support his work. He lacked tenacity and was an aloof, formal man. On his return to England in 1914, it seems that Blair ceased to have any priestly ministry, but lived quietly until his death at Ealing, aged 57, on 18 November 1925.