naval officer, was born in 1785, the second surviving son of Admiral Sir Richard Onslow, bart and Anne, née Mitchell. He entered the Royal Navy at the relatively late age of 25 and served in the captured French vessel Surveillante, distinguishing himself during the Peninsula War in several landings on the north coast of Spain. He then joined the Montagu (74 guns) which was engaged in the war with the United States and remained in South American waters until 1818. He was promoted lieutenant in 1816 and served on the Conqueror (74 guns) based at the Cape of Good Hope and covering St Helena (where Napoleon was being held). He was promoted commander in 1822 and spent two years on the Jamaica station. 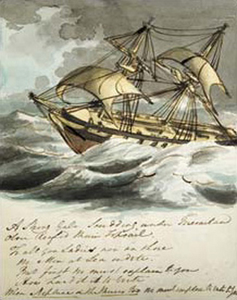 Sketch of a brig-sloop, probably HMS...

In 1830 he was appointed to command HMS Clio (16 guns) on the South American station. In 1832, acting on the instructions of the Foreign Secretary Lord Palmerston, Admiral Sir Thomas Baker, in command at Río, instructed Onslow to sail to the Falkland Islands to reassert British sovereignty. Onslow arrived at Port Egmont in West Falkland on 20 December and found the remains of the British settlement there unoccupied. After sending his boats to explore the neighbouring waters, he sailed for Berkeley Sound on East Falkland, arriving at Port Louis on 2 January 1833. Here he found a Buenos Airean schooner the Sarandi anchored off VERNET's damaged settlement. A civilised confrontation with the Argentine captain, Pinedo, followed:

I waited upon the commander of the schooner. He informed me he commanded both afloat and ashore. I acquainted him civilly with the object of my mission and requested him to embark his force and haul down his flag on shore, he being in a possession belonging to the Crown of Great Britain. At first he acquiesced, providing I put the same in writing, which I did. [The following day finding that the schooner's captain]  wavered and was reluctant to strike the flag, I immediately landed, hoisted the Union and caused it [the Buenos Airean flag] to be lowered, sending it with a civil message to the schooner. 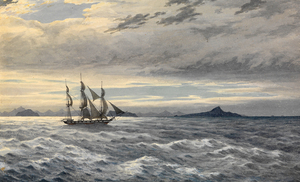 Onslow instructed the Argentine garrison, which had arrived with MESTIVIER just three months earlier, to leave, but urged the handful of genuine residents to remain, as most of them did. The Sarandi sailed and Onslow remained at Port Louis for ten days, entrusting the senior British resident, William DICKSON, with the hoisting of the Union flag on the flag pole which the Clios had erected. He concluded his report with an optimistic assessment of the Falkland Islands, recommending that a small force be stationed there and that naval ships visit frequently.

In June 1833 Onslow returned to Portsmouth and on 17 June was paid off. In 1834 he was promoted Captain, but he remained on half pay until 1842. In 1840 and 1841 he wrote to the Colonial Office supporting plans for colonising the Islands and offering to become governor; but the post went to Lt MOODY of the Royal Engineers. In a letter to the Admiralty dated 4 May 1842 he applied for a command and claimed that: 'I was selected for a most delicate service, "the re-taking of the Falkland Islands", a service which Wm 4 [King William IV] and Sir T Hardy were pleased to say had been performed with great judgement'. Whether because of this plea or not, in July 1842 Onslow was appointed to command the 18 gun corvette HMS Daphne in the Pacific. During this tour he called at the Islands from 22 April to 4 May 1844. He returned to England early in 1847 and was retired.

Onslow was married and had four sons all of whom joined the navy or the Royal Marines. Only the eldest, William Lake Onslow, who later took holy orders, survived his father. Onslow died in 1856. He did not enjoy a brilliant career by the standards of his very naval family, but he handled the recovery of the Falkland Islands in 1833 firmly and with tact.