Argentine dictator, was born in Buenos Aires on 30 March 1793, the eldest son of León Ortiz de Rosas and Augustina López de Osornio. From a wealthy landowning family, Rosas was noted in the young Argentina for his leadership and personal bravery and during the 1820s he built up what amounted to a private gaucho army.  He championed the Federalist cause, and the trigger for his ascent to power was the failed coup by Unitarian General Juan Lavalle in December 1828. Rosas became governor of Buenos Aires in December 1829. He favoured the British and, in the stability he imposed, British merchants in Buenos Aires were able to develop their business interests. At the end of his term in 1832, Rosas declined to continue as governor, and Buenos Aires rapidly returned to strife. In 1835 the Assembly of Representatives granted him the full powers he demanded and he enjoyed 17 years of absolute rule as a dictator, while his gang of gaucho cutthroats, known as the Mazorca, simply murdered any opponents. The reassertion of British sovereignty over the Falkland Islands in 1833, when one of Rosas's rivals was in power, aroused some brief anger in Buenos Aires but was overshadowed by the general civil disorder. 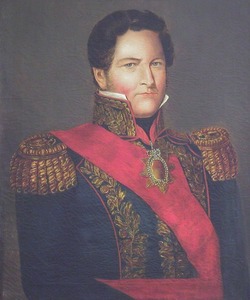 Rosas himself was not much concerned over the Falklands, although at intervals he protested at the British occupation. However, in 1838, he proposed to exchange Argentina's claim to the Falklands for cancellation of the remaining part of the loan for one million pounds sterling from Baring Brothers of London. This had been contracted in 1824 to modernise the city of Buenos Aires. In January 1839, Manuel Moreno, the Argentine minister in London, on behalf of his government, sounded out the British government on Rosas's idea, apparently without success. Rosas also had his idea put to Franck de Pallacieu Falconet, the Barings emissary sent to Buenos Aires in 1842 to try to restart payments on the loan, and also instructed Manuel Moreno to raise the matter again then in London - with the same result. Foreign Secretary Lord Aberdeen turned it down (See Manuel MORENO).

The problem of Uruguay brought Rosas into conflict with Britain and in 1845 a combined French and British fleet broke the blockade which Rosas had set up on the Parana river at the Vuelta de Obligado, to isolate rebel provinces in the north plus the province of Paraguay, which was seceding from Argentina. But it was through the treaty ending the Anglo-French intervention that Rosas is most significant to the Falklands. Before peace between Britain and Argentina could be formalised, Rosas wanted an agreement to boost his own position, recognise Argentine sovereignty over the Parana, and vindicate his decision to blockade it, which had cost him so many men. So he held out for a formal settlement and, in 1849, Argentina signed a Convention of Settlement. This declared "perfect friendship" and ended British intervention in the River Plate area. Although the convention did not mention the Falklands, it effectively ended the Falklands dispute too. With that treaty, all protests from Argentina over the Falklands ceased for the next 35 years. In 1850, Britain ratified the 1849 Convention, and Argentina acquiesced in British occupation of the Islands. 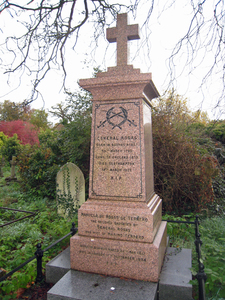 Rosas' memorial in the Old Cemetery...

Several historians maintain that the 1849 Treaty was meant to include the Falklands. The Mexican Carlos Pereyra in his book Rosas y Thiers. La Diplomacia Europea en el Río de la Plata 1838 - 1856   (published 1919) believes that Rosas wanted to use the Falklands to purchase Britain's departure from River Plate affairs. He gives seven final 'bases for the treaty' and adds an eighth: '(Unwritten) England retains the Malvinas Islands'. The Argentine historian Alfredo R Burnet-Merlin in his book Cuando Rosas Quiso Ser Ingles (When Rosas wanted to be English), suggests that the omission of any reference to the Falklands in the 1849 Treaty could be considered a secret renunciation of the Islands. Complete silence followed for 35 years, until President ROCA revived the Argentine claim in 1884, with the 'Affair of the Map'.

Rosas was driven from power in February 1852 and was taken on a British warship into self-imposed exile in Britain. He lived in and near Southampton. Rosas died on 14 March 1877. He was buried in the Old Cemetery, Southampton, but his remains were returned to Argentina in 1990 and now lie in the family tomb in the Recoletta Cemetery, Buenos Aires.