Argentine diplomat, was born on 31 January 1782. Like his elder brother, Mariano, he was educated at the Real Colegio de San Carlos, and is said to have commanded a unit resisting the British invasions of Buenos Aires in 1806 and 1807. When Mariano Moreno became secretary to the Primera Junta, the governing council which succeeded Spanish colonial rule following the Revolution of 25 May 1810, Manuel became his assistant. In 1811 Manuel Moreno accompanied his brother, who had been sent to London. However, Mariano died during the voyage, showing all the symptoms of poisoning, and was buried at sea. He may well have been a victim of his political enemies. Manuel Moreno went on to Britain, and lived there for two years, writing a book about his late brother. He then returned to Buenos Aires, only to fall foul of the powers that be and to leave as an exile for the United States. There he studied medicine at the University of Maryland in Baltimore. 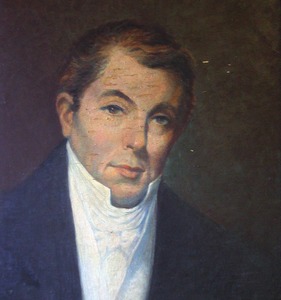 Moreno returned to Argentina in 1821. He never practised medicine, but became a leading scientist. He also continued to write and was made director of the National Library a year later. However his most important activities were political. He became a deputy and a government minister and, under the premiership of Manuel Dorrego, was minister of foreign relations. This led on to his appointment in London as chargé d'affaires in 1829. Three years later, he was promoted to minister plenipotentiary in London.  He was therefore spokesman for President Juan Manuel de ROSAS during his long period in control of Buenos Aires and the young Argentine Confederation.

So it fell to Moreno to protest against the return of the British to the Falklands in 1833. On 17 June 1833, he submitted a protest, backed by a detailed historical argument, which was later published in instalments in the British Packet and Argentine News. This was intended to prove Spanish rights to the Falklands, and to claim that Argentina had inherited these on gaining its independence. Like Louis VERNET's similar historical arguments, deployed against Francis Baylies, the American chargé d'affaires in 1832, following the Lexington Raid, it was probably written with the help of Pedro de Angelis, a Neapolitan who had emigrated to Argentina, and became known as the 'father' of Argentine historians. In particular, Moreno's protest of June 1833 concentrated on the argument that there had been a secret promise on the part of the British to evacuate Port Egmont shortly after its return to Britain in 1771. This led King William IV to order an investigation in British archives, and much of the correspondence from 1771 was submitted to Moreno by the foreign secretary Lord Palmerston on 8 January 1834 to disprove his thesis. Moreno was not satisfied. 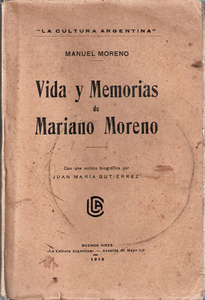 The cover of Mariono Moreno's...

In 1842, Moreno tried to raise the matter of the Falklands again after Lord Aberdeen had taken over as foreign secretary from Palmerston. In a similar exchange with Aberdeen, Moreno appeared very grudgingly to accept that there had been no such secret promise.

Later it fell to Moreno to discreetly sound out Britain on Rosas's idea of exchanging Argentina's claim to the Falklands for annulment of its debt to London bankers Barings, contracted by Bernadino Rivadavia in the 1820s, and in default. In November 1838, Rosas instructed Moreno to: "insist on the claim whenever there is an opportunity... but at the same time explore wisely, without it being apparent that it is an idea of this government, if there were a disposition on the part of the British Government to do a financial transaction that would be to cancel the debt...". Later, in 1842, when Barings sent an envoy, Franck de Pallacieu Falconet, to Buenos Aires to try to restart payments on the loan, Minister of the Economy Manuel Insiarte tried to get him to pursue this idea with the British Government. At the same time, Moreno, in London, was again instructed to pursue the idea. It is not clear quite what enquiries Moreno made to the British Government. But Moreno reported that the main problem was that Britain simply did not accept the Argentine sovereignty claim; also Moreno thought such an arrangement would have to go before Parliament, where he probably harboured fears that it would be considered a private business matter and nothing to do with the British government. The outstanding principal and interest was about one million, nine hundred thousand pounds by then too, and Moreno doubted whether Argentina's claim to the Falklands could be considered to be worth all that. Whatever the reasons were, Foreign Secretary Lord Aberdeen turned the proposal down, and Argentina had to give up the idea. As a result, Argentina re-started its payments on the Baring loan on 1 May 1844, although these were suspended again in October that year because of the blockade of the River Plate which marked the beginning of the Anglo-French intervention there. They were then not restarted until the 1849 Treaty (below) had re-established peace again.

Moreno wrote again to Palmerston in July 1849 to protest against a reported remark in parliament that Argentina had acquiesced in Britain's recovery of the Falkland Islands and to reassert his country's claim. Palmerston replied emolliently, although his cryptic wording is still misconstrued in Argentina today. Unlike Moreno, who had been kept in the dark by Rosas, Palmerston knew that an all-embracing peace agreement with Argentina was under negotiation in Buenos Aires at that time to end the Anglo-French intervention in the River Plate.

While not mentioning the Falklands directly, this treaty would effectively accept Britain's possession of the Islands. It was signed that November, and ratified the following year. In the aftermath of the 1849 treaty, Argentina fell silent about the Falklands for 35 years, until President ROCA revived the claim in 1884 with the so-called 'Affair of the Map'.

Rosas fell from power in 1852, and went into exile in Britain. So Moreno was recalled to Argentina. He then lived in Buenos Aires in comparative obscurity, taking no further part in politics, and died on 28 December 1857.