Argentine politician, was born in Buenos Aires in 1880. He qualified as a lawyer in 1900, but his thesis on La Miseria en la Republica Argentina (Poverty in the Argentine Republic) was rejected because of the strongly polemical tone of his socialist analysis. He entered politics the following year and in 1904 he was elected deputy, the first socialist deputy in America. 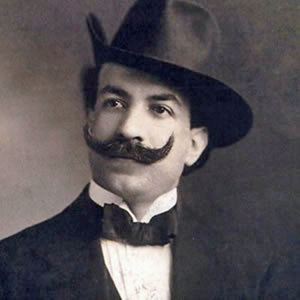 During his long life, he occupied various university professorships in philosophy, law and related subjects and held seats in the Chamber of Deputies and the Senate. His political activity saw him serve a prison sentence and exile in Uruguay, (where he was later ambassador). In his intellectual work, he produced many books, such as El Nuevo Derecho (New Law), Universidad y Democracia (University and Democracy), and La Fatiga en el Trabajo (Fatigue at Work). In these and in his political activities he put forward the need for socialism with national roots. As a legislator, he was responsible for sixty laws with social content, such as confirming Sunday as a day of rest from work, or regulating working conditions for children and women. He enjoyed international fame, being designated Maestro de America (Master of America) shortly before his death.

He took part in very diverse activities, being one of the first Argentines to make a trip in a balloon. At the same time as he enjoyed general respect, he was a flamboyant character, with a large moustache and dressing in a distinctive gaucho fashion with a poncho and large hat.

Palacios attached great importance to the subject of the sovereignty of the Falklands. In 1934, he published Las islas Malvinas, un archipelago argentino (The Falkland Islands, an Argentine Archipelago), which has gone through various editions, and which is a good résumé - for its time - of the historical and legal aspects. Before this he had had Las Islas Malvinas, a serious historical and legal study by the Franco-Argentine expert Paul GROUSSAC, re-edited. In 1939, with a group of intellectuals, he founded the Junta pro Recuperacion de las Malvinas (Committee for the Recovery of the Falklands), which had an important role, making presentations to the authorities and to international bodies. He carried out many public functions to influence the public conscience and, by means of a competition, created the Malvinas March, with music by José Tieri and lyrics by the well known poet Carlos Obligado, which is still used today. The Committee was replaced by the present Instituto de las Malvinas y Tierras Australes Argentinas (Institute of the Falklands and Southern Argentine Lands) which is a private body, all involved doing so academically.