ships' captain, was born on 8 December 1885 in Liverpool, the son of Edward and Sarah Roberts, née Williams. The family, who all spoke Welsh as their first language, came from farming stock in Cynwdd, near Corwen, North Wales. He was educated at a Board School in Bootle, Liverpool, and went to sea at an early age. He rounded Cape Horn several times in large sailing ships 'before the mast' and then as second mate of the full-rigged ship, Neotsfield. He obtained his Certificate of Competency of a Foreign Going Ship on 24 June 1912. In July 1912 he joined the Pacific Steam Navigation Company (PSNC) as fourth officer in the Orcoma. The last PSNC ship in which he served as chief officer, was the Huanchaco. He had from time to time called in at Port Stanley and during a voyage in the Huanchaco he was persuaded by some sheep farmers, one of whom was Sydney Miller, father of Sydney MILLER, to apply for the post of marine superintendent of the FIC and to take command of RMS Falkland. This he did in 1921 but because the Falkland happened to be in Buenos Aires when he arrived at Stanley his actual first command for a short time was the FIC schooner Gwendolin. 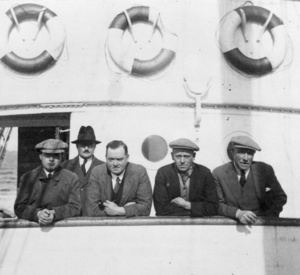 On 27 Nov 1917 he married Annis Marjorie Holgate, at Christ Church High, Harrogate. They had three children: (see Annis Marjorie Holgate ROBERTS). In 1931 Roberts took command of the FIC's newly built ship, the Lafonia, later called Fitzroy. In this and other FIC ships which he commanded he sailed round the Islands, often going to Montevideo, to Punta Arenas, sometimes to South Georgia and occasionally to southern Brazil. In 1935 he was elected to membership of the Honourable Company of Master Mariners in London.

From 1939 to 1949 he was colonial manager of the FIC in Stanley. In this capacity as well as being a master mariner he was of assistance to Commodore HARWOOD before and after the Battle of the River Plate in December 1939. He was a popular and successful manager and the Company and colony benefited from his maritime background. In 1943-5 he played a major role with the Fitzroy in Operation Tabarin*, the setting up of bases which ensured the British presence in the Antarctic. He also ensured that Fitzroy, the colony's sole link with the outside world was not unduly hazarded during the operation. Tabarin became the Falkland Islands Dependencies Survey after 1945 and later the British Antarctic Survey. Mount Roberts (3,133ft/955m)  on the Antarctic Peninsula commemorates his name. He was a member of LegCo and ExCo while he was manager of the FIC in Stanley and appointed to the Civil Division of the OBE in 1946 for public service and services in the Falklands during the war. He retired to the UK in 1949 and died at Aberdeen following a heart attack on 24 March 1970. 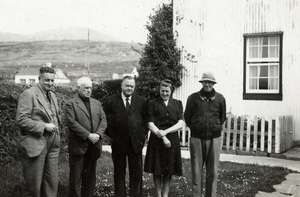