spinner, was born in Harrogate, Yorkshire on 30 December 1891, the daughter of William and Jessie Holgate, of Yorkshire Dales farming stock. She was educated at a private school in Harrogate and was an accomplished linguist, fluent in German and French. Before her marriage in 1917 to Captain David ROBERTS she dealt with the foreign correspondence of several large firms and in 1918 was private secretary to the Rt Hon Sir Herbert Samuel MP during his election campaign. 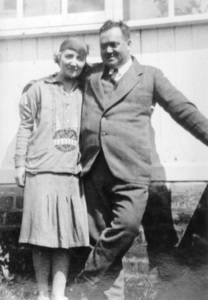 She accompanied her husband to the Falkland Islands in 1921. During the 1920s she was editor of The Penguin but resigned from that commitment in 1928. She also took a leading voluntary role as Islands secretary to the Girl Guides Local Association. Another activity was contributing to the local broadcasting service inaugurated in Port Stanley and on a temporary basis she assisted in the colonial secretary's office. Later she became fluent in Norwegian and was thus able to converse with Norwegian whaling captains calling in at Port Stanley. During World War II in Yorkshire she taught basic Norwegian to RAF crews liable to be shot down over Norway.

She was unquestionably the prime mover and founder of the Spinners' Weavers' and Dyers' Guild in the 1920s. An expert spinner herself, she had noted that wool was exported but that no one was using it locally. Then she realized that many ladies of Scottish origin, especially Hebridean, had spinning skills so she interested herself in forming the Guild. The Hebridean ladies knew about natural dyes so they collected crotal (Gaelic for lichen) from the rocks for dyeing purposes. Some had spinning wheels, but more were needed so she obtained a verbal promise of financial support from Government and ordered spinning wheels from Norway to be brought out by a whaling factory ship. But when the wheels arrived there was some misunderstanding and Government money did not materialise. To overcome this difficulty coffee mornings, raffles, etc were organised and the problem was solved.

She and her husband had three children: Gerald Holgate ROBERTS (b1923), David York Roberts (1924-2006 who became a commander in the Royal Navy) and Wensley Marjorie Roberts (b1926, who married Dr El-Hefni and now lives in the USA). Annis Roberts left the Falklands in 1931 with her children to educate them in the UK. When she returned in 1947 the Guild was still in existence and when she finally left the Colony in 1949 she received a scroll signed by the membership. In 1961 a letter to her, then in England, from Frances CREECE, who had become president of the Guild recorded that members of the Guild were having difficulty keeping up with the demand for their work from the Royal Navy and other visitors. The Guild was also providing classes for senior pupils at the school and another generation of expert spinners was growing up. She died of a heart attack in Aberdeen in 1974.