was born at Gdoff {Gdov} Russia on 1 January 1912. Her grandfather had an estate at Gdoff and it was there that her Scottish born father, who had just qualified as a doctor, stayed for a six month holiday with a Scottish family who had settled in Russia. He married their daughter, the mother of Frances, and stayed on. The family were forced to flee during World War I, shortly before the Revolution when Frances was only five. They crossed Lake Piepus and continued through Scandinavia to England, without her father who had enlisted in a Cossack regiment and was helping a member of the Tsar's family, Princess Leiven, to escape through Afghanistan (where he was rewarded with a gift of paintings). 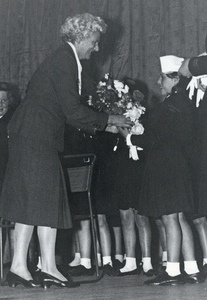 The family settled in Canada, but returned to England when Frances's father died. The family had traditionally gone into the medical profession and while Frances's brother entered medical school, she herself trained as a nurse in St George's Hospital. She had always wanted to serve overseas and accepted a post as nursing sister at Stanley, arriving on the Lafonia on 22 August 1939. She quickly adapted to life in the Islands and, being an accomplished rider, often rode out to attend sick people.

The outbreak of war in September 1939 transformed her life. The hospital's matron was on leave in the UK and decided not to return as she believed she could make a greater contribution to the war effort elsewhere. In December 1939, the Battle of the River Plate resulted in extensive damage and many casualties to HMS Exeter and her crew and when the cruiser limped in to Stanley harbour, Frances Creece was the only state registered nurse there. She was appointed matron and quickly organised the hospital with temporary assistants and additional supplies. Some of the wounded had to be taken straight into surgery and Frances did not sleep for three nights. Her magnificent work was rewarded with an inscribed compact presented by Captain BELL of Exeter, which was later to save her life. Returning from leave in 1943 her ship was torpedoed and sunk and Frances spent five days in an open boat with other passengers and crew. A passing American plane was alerted by a crew member who borrowed the compact from Frances to make a signal. 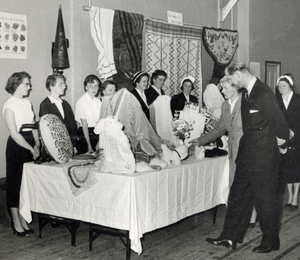 In April 1943 Frances married Martin George Creece, office manager of the Falkland Islands Company. Born in the Islands, he was active in local politics and in sport and was an elected member of LegCo from 1955-1960. They had one son, Dermott. Frances was awarded the MBE. The family left Stanley in March 1964 and settled in Sussex.