dental surgeon, was born at Stanley on 10 May 1923, the eldest son of Captain David William ROBERTS and Annis Marjorie ROBERTS, née Holgate. He attended the Government school at Stanley until 1931 when he left Stanley in MV La Paz with his mother, brother and sister for further education in UK. At the age of six he suffered a tobogganing accident in Stanley, which left him with a lifelong limp. After attending King James's Grammar School at Knaresborough, Yorkshire, he went to Leeds University Dental School and qualified there as a dental surgeon in 1946 having also obtained the senior operative Prize in Operative Dental Surgery. In 1947 Roberts went for further training at the Dental Faculty, University of Toronto, and obtained the DDS of that University. 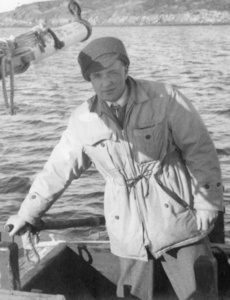 Thereafter he returned to the Falkland Islands to be colonial dentist for three years, 1947-1950. He presented a scheme based on operative clinical timings and transport times whereby every settlement could receive an annual dental visit and recommended that a second dentist should be recruited. After the Falklands tour of duty he returned to England to study orthodontics at the Institute of Dental Surgery, London, 1950-l 951.

In 1953 he obtained the Diploma in Dental Orthopaedics, Royal Faculty of Physicians and Surgeons, Glasgow. In 1953 he joined the hospital service of the National Health Service as a senior registrar at Edinburgh Dental Hospital and achieved consultant status, the first Falkland Islander to do so. His first consultant appointment, 1957—1960, involved taking part in a pilot scheme of the Ministry of Health to determine methods of provision of specialist oral surgery, orthodontic and other dental services in the hospital service. Thereafter he took up consultant appointments for Cumberland and then at the Royal Aberdeen Children's Hospital, where he was also honorary senior clinical lecturer in orthodontics at the University of Aberdeen. All these consultant posts involved giving general dental practitioners orthodontic advice or treatment for the patients they referred and provision of orthodontic services at regional peripheral clinics and for this his Falklands experience was of special value in Orkney and Shetland. In 1956 he invented the 'Roberts Retractor', an orthodontic appliance widely used. In 1964 he was awarded a Council of Europe scholarship to study children's dental and orthodontic services in Holland, Denmark, Sweden and Norway. He retired in 1983. His hobbies include watercolour painting, writing and carpentry; he has built a small cruising yacht and called it Kelper.