Argentine sailor and explorer, was born in Carmen de Patagones {Argentina} the son of Miguel Piedra Buena and Vicenta, née Rodriguez. He began his career as a sailor at the age of 11 under Captains John Lennon and James Harris. His principal benefactor was Captain WH SMYLEY, who gave him early responsibilities as a member of the crew of the John E Davison. With Smyley he visited the Islands for the first time in 1848, even though it was only to re-provision the vessel on both outward and home journeys. Later he was present with Smyley at the discovery of the bodies of Allen GARDINER and his mission party, all of whom had starved to death in 1851 on the shores of Tierra del Fuego. Subsequently he accompanied Smyley on a visit to the United States. 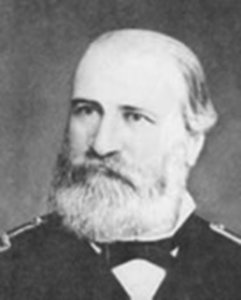 After Piedra Buena had established himself independently, he based himself on the island of Pavón in the mouth of the Santa Cruz River. His was the first permanent dwelling in southern Patagonia. From there he would journey on the schooner Nancy. He may have visited the Falkland Islands on other occasions, but no records of such visits survive. He visited the Atlantic islands to the south as far as Cape Horn, claiming sovereignty over that place for Argentina. The Argentine President Bartolomé Mitre expressed approval of his actions, as the use of more official channels was restricted by an existing formal agreement with Chile.

In 1865, he arrived at Stanley in the small vessel Carlitos. There he bought a cargo of coal which was lost in Montevideo. He visited the Islands in his schooner Nancy (Esposa) both in 1866 (March and April) and 1867 (February). On the last occasion, he met Richard MAYNE, commander of HMS Nassau, who made much use of Piedra Buena's detailed knowledge of Patagonian waters, urging him to install a buoy to mark the entrance to the Strait of Magellan. The most outstanding episode in the life of Piedra Buena in the Islands happened the following year with the shipwreck of the British barque Coquimbana. As the authorities subsequently accepted, he acted in good faith when he purchased the remains of the ship and its cargo of copper by auction in Stanley. But he lost the lawsuit against him, and as a result suffered financial losses from which he never recovered. 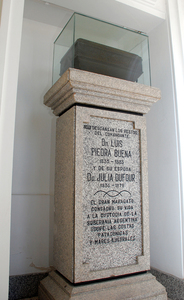 He married Luisa Dufour in 1868 and they had three children: Ana Vicenta (b1869), Luis Miguel (b1871), and Julia Elvira (b1876). He then made his final voyage in a private capacity in order to purchase cattle. In the same year the Argentine Government conceded to him Pavón and Staten Island {Isla de los Estados}. He was shipwrecked on the inhospitable shores of Staten Island, where he built a new boat called Luisito with the remains of the Espora, and got away. He was involved in a series of rescue operations of shipwrecked crews, and his disinterested and praiseworthy actions were formally recognised by various European governments. While assisting a group of Frenchmen trying to set up a colony in Patagonia, he travelled into the interior of Santa Cruz in the boat Tucutuyú, carrying with him a cow from the Falkland Islands and what has been described as a specimen of the warrah fox, which escaped into the desert.

He died in poverty in Buenos Aires on 10 August 1883. Only much later were his achievements recognised. He is considered the main figure in the establishment of Argentine sovereignty in Patagonia. In this, he acted at first in a private capacity - although he was in contact with the Argentine Government - until 1876 when he was designated an officer in the Navy. His contacts with the Falkland Islands occurred when he was acting in his business capacity. He remains today a well-known historical figure, commemorated by having a village facing Pavon Island named after him, as well as places in Tierra del Fuego and Antarctica. There are too street names in many cities, several of which incorporate commemorative busts.