He was promoted lieutenant in 1856 and two years later joined the Plumper, Captain GH Richards, employed on the survey of Vancouver Island and British Columbia. During the survey he was sent up the Fraser River to assist Colonel Richard MOODY, former governor of the Falklands, in a confrontation with Edward (Ned) McGowan. Mayne also carried out a survey of the area occupied by miners and made a general report on the area.

He was promoted commander in 1861 and afterwards commanded the Eclipse in New Zealand during the war of 1861-2, when he was badly wounded. For his services there he was mentioned in despatches and promoted to captain. In 1866 he was appointed in command of the surveying vessel Nassau, in which he was employed for three years carrying out surveys in Magellan Strait. During the course of this survey Mayne made two visits to the Falklands. The first visit, between 18 February and 3 March 1867, was spent in Port Stanley provisioning and coaling ship.

His second visit, between 14 January and 1 February 1868, was again to provision and coal ship. However, much of Mayne's second visit was taken up enquiring into the sale of the 484 ton British barque Coquimbana, wrecked on Tysssen Patch in Falkland Sound on 31 May 1867, when bound from Valparaiso to Bristol with a cargo of copper and barley. Captain Thomas Boden, the barque's captain, sold the wreck by auction in Stanley to Don Luis Piedra BUENA, a well-known sea captain and adventurer. 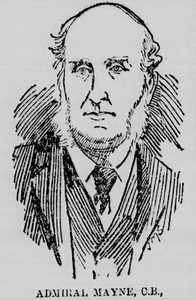 As a result Captain David Miller, RN, was sent to Stanley as a special agent for Lloyds to sue Piedra Buena in the Magistrate's Court for the return of the ship and cargo on the grounds that the sale was not of necessity and therefore illegal. The court, however, found in favour of the defendant. Miller then lodged an appeal to Governor William ROBINSON. As a result the governor asked Rear-Admiral George Ramsay, commander-in-chief SE coast of America, who was in Stanley at the time in his flagship HMS Narcissus, for assistance. Ramsay sent Mayne and the commanding officer of the Narcissus, Captain John C Wilson, to examine the wreck. They left Stanley by boat on 16 January, returning on 20 January.

At the subsequent appeal to the Council, chaired by the governor, Mayne and Wilson's report to Admiral Ramsay was read, in which Mayne stated that the wreck was in no danger of breaking up. In cross-examination Mayne stated he did not wish to alter one word of the report. In consequence the Council upheld the appeal and ordered that the appellant should take possession of the wreck on payment to Piedra Buena of £250, the original purchase price of the wreck. As an addendum to their decision the Council stated that it was their opinion that Piedra Buena acted in good faith and that as he had been to considerable trouble and expense in clearing away the barley preparatory to getting at the copper he was entitled to some consideration at the hands of the appellant. In writing to the Hydrographer of the Navy, Mayne referred to the sale to Piedra Buena as a swindle as the cargo of copper worth £9,000 had been sold for £250. On his way back to his survey area Mayne landed a party of ten seamen and marines from the Narcissus, under the command of Lieutenant Henry J Carr, with a pinnace, on Tyssen Islands to recover the copper from the wreck, which was expected to take a month to six weeks. Piedra Buena was also present in a small sealing schooner. Afterwards Mayne took shelter in Fox Bay, departing from there on 1 February for Magellan Strait. 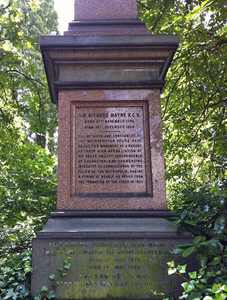 Mayne commanded the Invincible on the Mediterranean station (1875-6). He was placed on the retired list in 1879 with the rank of rear-admiral.