American sealer, sailed from Sandy Hook, New Jersey, on 12 April 1812 in the 132 ton brig Nanina of New York on a sealing voyage to the Falkland Islands, anchoring off New Island on 7 September 1812. The Nanina's captain was his father Valentine, and among the crew were Barzillai Pearse, Andrew Hunter and Edmund FANNING, the wellknown American sealer, who was temporarily out of employment due to the strained relations between the United States and England. On arrival off New Island a shallop* of 10 tons, which had been brought out in frame, was constructed on shore and then sent to the Jason Islands, where a party of ten men were landed on Steeple Jason, with provisions for six weeks. At the beginning of January 1813 the Hope of New York, Captain Obediah Chase, called at New Island and informed Barnard that the United States had declared war against Great Britain. As a result of this information Barnard recalled his men from Steeple Jason and moved the Nanina to the head of Port Richards, referred to by Barnard as Barnard's Harbour, where he hoped to be safe from English whalers, who might be issued with letters of marque*. 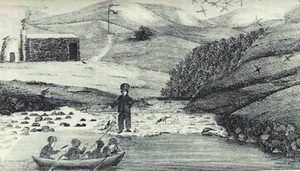 19 Return of the author’s companions...

Sealing operations were then resumed off West Falkland. The following April Barnard took the shallop to Fox Bay, from where he saw smoke rising from Speedwell Island (Eagle Island to Barnard), in the south-east entrance to Falkland Sound. Barnard made for the island and, when people were sighted on shore, hoisted American colours. Barnard found 44 people on the island, including 13 Royal Marines, eight women and two children, survivors of the 194-ton Isabella of London which had been wrecked there on 9 February 1813, when on passage from Port Jackson, in New South Wales, to London. Three officers and three men had already set off in the Isabella's longboat for South America to seek relief, while another four were away in a second boat searching other islands in the Falklands group.

Barnard offered to convey the whole party to some port in South America in the Nanina and a written agreement was drawn up to that effect. But before the agreement was signed Barnard volunteered the information that Great Britain and the United States were at war, adding that he hoped that this fact would make no difference to the friendly relations between the two parties. Some of the British were reluctant, but after some discussion the agreement was duly signed. Barnard then took four of his own crew and 20 of the castaways on board the shallop and set sail on 8 April for the Nanina, with the intention of bringing her round to Speedwell Island to embark the rest of the Isabella's crew and passengers. In Falkland Sound he found the four of Isabella's people who had left in the second boat and took them on board, but bad weather forced him to anchor in Port Edgar, from where he led a party of 18 across the island to the Nanina. He then returned to the shallop and four days later succeeded in rounding Cape Meredith, only to be forced to take refuge in Port Stephens. After calling at Weddell Island to obtain a supply of geese and hogs, Barnard eventually reached the Nanina. On 14 May the shallop was sent back to Speedwell Island, to bring back the remaining survivors from the Isabella plus such cargo or other articles from the wreck as Fanning and Hunter, who had been left there for that purpose, might select. Meanwhile Barnard moved the Nanina to his original anchorage off New Island. 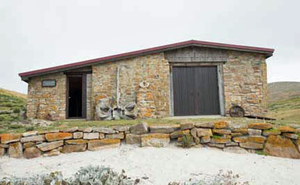 The prospect of taking such a large party to South America in the Nanina made it necessary to lay in a stock of provisions for the voyage. Accordingly, Barnard, Jacob Green, an American coloured man from the Nanina, Samuel Ansel, Joseph Albrook and James Louder, Englishmen from the Isabella, went by small boat to Beaver Island on 10 June to obtain some hogs, which were running wild on the island. To their horror, when they returned to New Island, they discovered that the Nanina had disappeared, leaving nothing behind, not even a message.

Three days after Barnard set off for Beaver Island the British passengers on board the Nanina had seized her and got under way. They first made for Beaver Island where a gun was fired to attract Barnard's attention, but with no signs of him they were not prepared to anchor and search the island and so set course for Speedwell Island, leaving Barnard and his companions to their fate. But on arrival at Speedwell Island, Nanina was made a prize of the British 16 gun brig HMS Nancy, Lieutenant William D'Aranda. Isabella's longboat had succeeded in reaching Buenos Aires and the Nancy had been sent to her relief. On 10 July D'Aranda sent the shallop to search for Barnard and his companions, but it returned on the 13th without finding them. It seems unlikely that the shallop even reached Beaver Island. On 27 July the two brigs left Speedwell Island with the survivors, the Nancy bound for Buenos Aires and the Nanina, under a prize master bound for England. The Nanina, however, was forced to call at Río de Janeiro for provisions and water, before continuing to London. Here, according to Barnard, D'Aranda had attempted to wrest 'from an unfortunate man his vessel, while in the act of saving many of their subjects from actual starvation'. 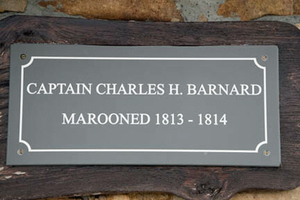 Back in the Falklands the plight of Barnard and his companions was most wretched as it was now the depth of winter. First they attempted to make their way by boat to Speedwell Island, but were forced to turn back. Having abandoned hope of being rescued by the Nanina or the shallop they made for New Island early in October, as whalers sometimes put in there for water. As it was approaching the time that the albatrosses began to nest, Barnard provided each man with a sealskin bag to collect their eggs. About a week after their return to New Island Barnard's four companions, at the instigation of Ansel, deserted him, taking the boat, almost all his belongings and more importantly his dog, Cent, who was invaluable in catching wild hogs. In their absence Barnard managed to rekindle the fire which they had kept alight since returning to New Island. In this he was greatly assisted by discovering a source of peat on the island. He then began to construct a stone building, covering the roof with seal skins. He also recovered three small potatoes which he planted in the hope that they would produce a crop in due course. In December penguins arrived, making their nests between the albatrosses, enabling Barnard to collect their eggs in large numbers.

On 17 December 1813 the four erstwhile deserters returned to New Island and were reconciled with Barnard, who had thus been alone for more than two months. They told him that they had returned to the site of the wreck of the Isabella, but found that every useful article had been destroyed or carried away. From Louder, Barnard learned that Ansel had tyrannised the other three and so it was resolved to banish him from New Island. On 29 December, while Barnard remained on New Island, the remaining four took the boat across to Weddell Island ostensibly to obtain hogs, and marooned Ansel there. The remaining three then returned to New Island, after spending three days on Beaver Island. A few days later, with Barnard's consent, the three set off once again for the wreck of the Isabella, returning on 26 January 1814 with many useful articles. Barnard and his three companions then set off for Sea-dog Island, situated about half a mile north-west of Cape Orford, for fur seal skins. On the way they stopped at Weddell Island to drop off Ansel's share of seal skins and his belongings. Ansel fell on his knees, entreating them to take him off, which they eventually did with considerable reluctance. After visiting Sea-dog Island they returned to New Island where, as winter was approaching, it seemed unlikely that any whalers would call, they completed the house using driftwood and the ribs of a whale. During the winter, whenever supplies were low, they crossed over to Beaver and Staats Islands to hunt for hogs and fur seals. To supplement their provisions, Barnard devised a method of snaring geese.

By the middle of October the albatrosses had returned, enabling them to lay in a supply of eggs. The following month Barnard, Albrook and Louder went over to Weddell Island for some driftwood and hogs, but were detained there for some days by strong winds. On 26 November Albrook and Barnard set off to climb a hill, but before they could reach the summit they heard Louder cry out. On reaching him, all he could say was 'two ships', which they then could see were standing in for New Island. As soon as the tide allowed the three made their way back to New Island where, at six o'clock that evening, Barnard went on board the British whaler Indispensable, Captain William Buckle, who informed Barnard that he had received a letter from the British Admiral at Río de Janeiro, asking him to look out for the castaways, should he put in to any of the islands.

On 29 November 1814, the two British whalers got under way with Barnard, Louder and Albrook on board the Indispensable, and with Green and Ansel on board the Asp, Captain John Kenny. The two whalers rounded Cape Horn and worked their way north, killing a number of whales. When off the coast of Peru, Barnard and his two companions left the Indispensable in their own boat. Landing not far from Pisco, Barnard went through many adventures before finally reaching his home port of Martha's Vineyard, Mass on 23 October 1816. There can be little doubt that Barnard's patience and resourcefulness kept the party sane during their enforced stay of over 17 months in the Falklands.

Having recovered from his ordeal, Barnard went to England where he appealed against the judgement of the Prize Court which had declared Nanina to be a lawful prize. His efforts were successful, and on 5 February 1818 the court restored his ship to him and he was awarded damages.

During a sealing voyage to the South Shetland Islands in 1821 in the Charity, Barnard called once again at New Island Harbour where he met James WEDDELL, whose account published in 1825 first drew attention to Barnard's misfortune. On his way back to the United States, 'nearly at the same place where I encountered these British demons' Barnard found a British seaman who had been abandoned by his captain. Barnard took him on board and gave him a passage to New York, where he handed him over to the British Consul. It may have been the publication of Weddell's account in 1825 that encouraged Barnard to publish his A Narrative of the Sufferings and Adventures of Capt. Charles Barnard in 1829. This gives a lucid and readable account of his misadventures. His book included a chart titled 'Chart of the Falkland Islands as Surveyed by Capt Chs H. Barnard'. Since it includes both East and West Falkland it seems possible that Barnard may have visited the Falklands on several more occasions. Nothing is known of Barnard's final years after he was elected to the Marine Society of New York in 1831.

Charles Barnard; A Narrative of the Sufferings and Adventures of Capt. Charles Barnard;  A modern reprinting of Captain Barnard's book has been given ISBN number 0-8195-5031-0.