sealer and explorer, appears to have been born either in Ostend, Belgium or Massachusetts, the son of an upholsterer by trade, who migrated from his native Lanarkshire to London and his wife Sarah, née Pease. James joined the Royal Navy as a boy and took part in convoy duties during the French wars and the War of 1812-1814*. He was appointed master, Royal Navy, on 21 October 1815. One of his superior officers, Captain Hector Duff, testified to his ability as a good seaman, particularly fond of navigation, and unusually accurate in his calculation of longitude by lunar observations. His next captain, the Hon Robert Cavendish Spencer, commended him as a 'steady, trustworthy, deserving officer, who I had no fault whatever to find with', to be recommended 'as both an officer and gentleman'. 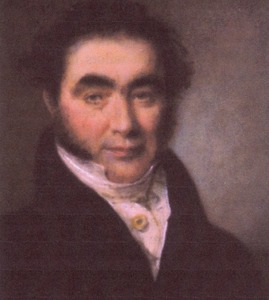 Weddell is celebrated in polar history for his voyage of 1822-1824 during which he penetrated the then unknown Weddell Sea as far as lat 74°15'S in the brig Jane, 160 tons, of Leith, and the cutter Beaufoy, 65 tons, of London. The voyage was to procure fur seal skins, the Jane being commanded by Weddell himself, with a complement of twenty-two officers and men, while the cutter, with a complement of thirteen, was commanded by Matthew BRISBANE. The vessels were provisioned for two years. Weddell tells us that he had already spent five years navigating these southern waters, including the neighbourhood of Cape Horn, presumably also in search of Fur Seals.

His voyage is remarkable in various ways. One of the seals brought aboard the Jane in January 1823 was new to Weddell; and its skull and skin, still housed in the basement of Edinburgh's Royal Scottish Museum, became the type specimen for Leptonychotes weddelli, the Weddell Seal. His high latitude south compares with that of Captain COOK (71°10'S) in a different longitude of the Southern Ocean. The event is portrayed in WJ Huggins' painting of the brig Jane and cutter Beaufoy, 20 February 1823, bearing up in 74°15' (this being the highest southern latitude ever reached). Weddell called his discovery after King George, but it was renamed after Weddell himself. Although not fitted out as well as the official naval voyages of exploration of the time, Weddell had three reliable chronometers and several compasses. There was of course no indication that he would attain such a notable southern latitude when departing from London. In the introduction to his book, he tells us that it was the solicitations of his owners and his friends that led him to publish this, instead of merely sending an official letter to the Admiralty summarising those interesting 'foreign and unknown matters' contained in his notes. 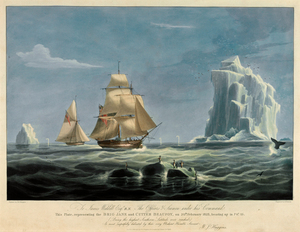 The Jane and the Beaufoy at the...

Such was the success of his narrative that two editions were called for, the second, of 1827, was fuller than the first, of 1825. Here is the full title:

A voyage towards the South Pole performed in the years 1822 - 24 containing an examination of the Antarctic Sea to the seventy-fourth degree of latitude and a visit to Tierra del Fuego, with a particular account of the inhabitants to which is added much useful information on the coasting navigation of Cape Horn and the adjacent lands, with charts of harbours, &c. . .

The second edition also contained 'observations on the probability of reaching the South Pole', as well as 'an account of the second voyage performed by the Beaufoy, Captain Brisbane, to the same seas'. The Falkland Islands may be counted among the 'adjacent lands'. The book, with other fine charts, plates, nautical tables, folding views, and a detailed text, is the extraordinary result of what the author called on the first page: 'Our adventure for procuring Fur-seal skins'. Among the folding charts is a 'Chart of Berkeley's Sound in the Falkland Islands', showing Port Louis, Hog Island and the 'French wreck' (the Uranie), beds of kelp and some soundings. 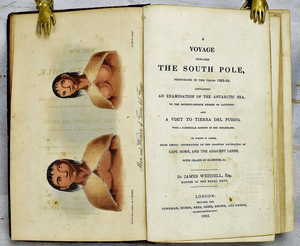 Weddell devotes chapter IV of his Voyage to the Falkland Islands, where the vessels wintered at an anchorage in Quaker Harbour, Swan Island, from 11 May to 7 October 1823, having first come to anchor at New Island. The brig's topmasts were struck and the vessel made secure against any heavy gales, while the cutter was kept ready 'for the purpose of pursuing our business'. Each man's allowance was reduced, but supplemented by whatever could be procured ashore. Weddell wintered twice among the Falklands and visited nearly all their harbours, so that his pages relating to them are authoritative. The chapter is mainly taken up with remarks useful to future mariners, not unlike sailing directions. However, Weddell also describes his dealings with Commodore FREYCINET and his vivacious wife after the wreck of the Uranie in 1820. Later in the same year, Weddell also had dealings in Port Louis with a Captain JEWETT, who took possession of the Islands in the name of the 'supreme government of the United Provinces of South America' {Argentina}. Weddell was able to combat the appalling outbreak of scurvy in Jewitt's crew from his knowledge of the use of 'fish, wild fowl and other vegetables'.

During a subsequent and brief visit to the Falkland Islands in February and March 1824, Weddell anchored in Robertson's Bay, then in Ship Harbour, at New Island and in West Point Harbour. At Port Egmont, a Spanish ship of the line the Asia, 70 guns, accompanied by the Achilles, 20 guns, lay anchored, much to Weddell's surprise. He dined aboard the Asia, where he examined the Spanish charts and also visited the brig. Shooting parties decimated the birds of the neighbourhood. The Jane and the Beaufoy returned to England 59 days after leaving Montevideo on 4 May 1824. 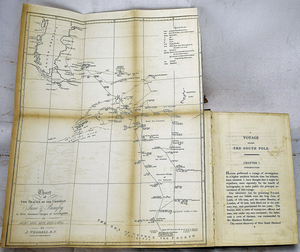 Chart showing tracks of the Jane and...

Weddell's portrait was painted by PG Dodd as a miniature, and copied by F Peake for the Royal Geographical Society, much enlarged. Like John BISCOE, Weddell suffered ill health during his later years, as well as great misfortune. In July 1829, while returning from a trading mission to Buenos Aires, his vessel the Jane was condemned as unseaworthy at Fayal in the Azores. He and the crew continued the voyage as passengers in the schooner Swallow, which was wrecked off the nearby island of Pico. By lashing himself to a rock, Weddell's life was saved, but he lost valuable papers, besides 'a quantity of specie' (coin). Some months later, as master of the merchant ship Eliza, owned by Messrs Asquith, Weddell spent nine, presumably fruitless, months in harbour at Hobart from May 1831 to January 1832, during which time he helped by chance to moor John Biscoe's Tula after his discovery of Enderby Land.

PG Dodd, who painted the miniature later wrote of Weddell:

In deportment very tall, large and bulky, with full face made up of bold features - complexion dark, full of warm glowing tone, his hair very black - energy and character, remarkably prominent in his eyebrows, common only to such men of enterprise or courage. During his sittings, his conversation was most instructive - portraying lively images of persons and things as seen by him abroad. Himself a tolerable draftsman he not only wrote a very scientific and popular work but gave to the graphic art a colouring of human as well as animal nature, discovered by him in his expedition. He possessed fortitude of character as one anecdote will evince - namely, once when shipwrecked and on a rock expecting the next wave to wash him off, he drew from his pocket his favourite author, always his companion, and philosophised under an almost insurmountable state of feeling. In private life he was easy, animated and cheerful - but when seen alone and unconscious of being seen, there was an appearance of melancholy seated upon his manly features indicating that he had experienced disappointments common to all - but with this difference only more intense from the refinements of his own character. He, like many others, struggled to advance great ends by most inadequate means, felt he was not encouraged, was ruined in pocket, broken in spirit and died, leaving to mankind a memorial of worth which fixes but to a lake, a sympathy and a name. 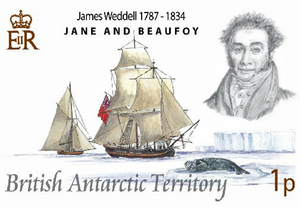 Weddell died penniless in Norfolk Street, off the Strand, London on 9 September 1834. He is remembered by Weddell Island (formerly Swan Island) in the Falklands and by the Weddell Sea in the Antarctic.

James Weddell; A voyage towards the South Pole; performed in the years 1822-24; first published 1925; reprinted by the United States Institute in 1970