Antarctic circumnavigator, was born at Ponders End, Middlesex, the son of Thomas and Ann Biscoe, and baptised at Enfield Parish Church in late June 1794. He entered the Royal Navy as a volunteer in 1812 and served in several fighting ships during the 1812-1814 war with the United States*, reaching the rank of acting master of HMS Moselle in 1815. After leaving the Navy he served in various merchant ships, largely as mate or master. In 1830, he was appointed by the sealing and whaling firm Messrs Enderby of London to command the brig Tula (148 tons) in company with the cutter Lively (49 tons) during a voyage to the Southern Ocean. American and British sealers had decimated the Fur Seals of the sub-Antarctic islands, so that, in searching for new sealing grounds, the voyage had a commercial as well as an exploring aim. The Enderbys were well-known for their ability to combine commerce with discovery. One of the Enderby brothers, Charles, was a founding Fellow of the Royal Geographical Society. Biscoe was to be awarded the Society's Royal Premium, the precursor of its gold medal, on his return from the Antarctic in 1833. Having been given instructions by Charles Enderby, the Tula and Lively departed Gravesend on 14 July 1830. They anchored in Port Louis, Berkeley Sound, in November 1830. Because of the gales it was difficult to get the water casks filled there. Another of Captain Biscoe's troubles there was the desertion of Smith, master of the Lively: 'in consequence of my reprimanding him for want of attention on board that Vessel'. Smith was replaced by George Avery. Biscoe was surprised to find a small colony at the Falklands and disappointed in his hopes of obtaining provisions at little cost. He noted in his journal that the proprietor, Mr. VERNET, was selling his lean and badly killed bullocks at £10 each; although there were better ones to the south of East Falkland, these were unavailable. The two small vessels departed on 27 November 1830 to prosecute their southern voyage. 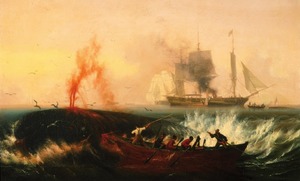 Biscoe became the third circumnavigator of the Antarctic, the first having been Captain James COOK in 1772-75 and the second Thaddeus BELLINGSHAUSEN of the Imperial Russian Navy in 1819-21. Neither of these two great navigators (nor James WEDDELL in 1822-24) was believed to have sighted recognizable continental land. Biscoe was successful in this, discovering Enderby Land in Greater (East) Antarctica in March 1831. Off Cape Ann, the Tula and the Lively were separated during what Biscoe described in his journal as a 'perfect hurricane', which lasted for three days. The weather was:

so thick that we could scarcely see twice our own length in any direction, and being so close to ice of every description, were in a very dangerous situation, the vessel being at the same time a complete mass of ice, and the wind blowing so intensely cold, it was impossible for the people to hold anything in their hands for more than a minute or two at a time. 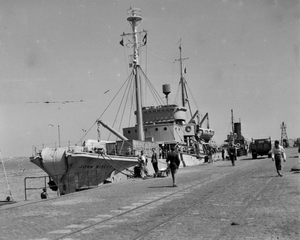 Named in honour of John Biscoe - the...

The Tula and Lively were reunited in Hobart {Tasmania}, where Biscoe sent dispatches to the Enderbys, which were forwarded to the Hydrographer of the Navy, declaring that he was 'firmly of the opinion' that he had discovered 'a large continent, as I saw to an extent of 300 miles.' Approaching the Antarctic Peninsula from the west, across the South Pacific Ocean in February 1832, land was sighted to the south-east, which Biscoe named after Queen Adelaide (now Adelaide Island) in latitude 67°15'S. He described it as having 'a most imposing and beautiful appearance', with 'one very high peak running up into the clouds', which 'occasionally appears both above and below them...' Sailing through what are now the Biscoe Islands, Biscoe pulled into a large inlet of the mountainous coast, and took possession of part of the Antarctic Peninsula, which was later called Graham Land, in the name of King William IV.

No new sealing grounds were discovered while the vessels proceeded north. After a very rough passage and despite a badly damaged rudder and shattered boats, the Tula entered Berkeley Sound once more on 29 April 1832, finding the cutter already lying near two schooners and the wreck of the American ship Potosi, at the entrance to Johnson's Harbour. Because the health of them all was 'much impair'd', it was necessary to stay for some time to recover. In addition, with the aid of a pair of blacksmith's bellows, the cooper made iron pintles for the rudder, so that it was eventually reshipped. One of the boats had to be run ashore in a heavy squall and was 'all to pieces' once recovered. Meanwhile an additional boat was being built from half a one picked up from the Potosi. On 19 June 1832, the Tula and Lively sailed from Berkeley Sound to seek Right Whales to the west. However, on 6 July, after reaching the rendezvous of New Island, Biscoe was greatly disappointed to find that the cutter had not arrived. Lying there was the American ship Martha with some 1200 barrels of oil on board, whose Captain Young feared the season was over and was about to depart, as had the John and Edward that morning, with a full cargo of oil. After a fortnight of gales and heavy squalls, only two fine days and no whales in sight, the crew having repaired the Tula's sails, on 20 July she departed to search for the Lively along the south coast of the West and East Falklands, examining Beauchêne Island and the Sea Lion Islands in vain. Having sighted 'Mackay's Island' and 'Cape Philip' to his west and northwest in a heavy gale at the end of July, on 5 August Biscoe sent boats to the Volunteer Rocks for seal (in vain) and the Tula entered Berkeley Sound, anchoring in Hog Island Passage on 10 August. Here Avery, Master of the Lively came aboard with part of the crew. She had been wrecked on Mackay's Island (the present Lively Island), a total loss and they had been taken off by the Unicorn, Captain Couzins, who was sailing under Montevidean colours. With extra mouths to feed, Biscoe lowered the crew's bread allowance to 3½lbs a week (with soup daily and 'other necessaries'). They refused to work and he agreed to 5lbs, hoping to stay out for the next sealing season after putting into port for more provisions at St. Catharine's, South America, should his crew not run away. However he remarked in his journal: 'they are quite out of heart with the Voyage & are dropping off one by one, as they find a chance & indeed I can hardly blame them'. He procured a fresh supply of beer, and on 20 August 1832, made sail for the island of St Catharine's, meeting strong gales and irregular seas, one of which struck the ship's try-works, damaging its bricks. By 29 September all but a small remnant of the original crew had deserted and the Tula limped home across the Atlantic Ocean, to anchor in the Downs on 31 January 1833. 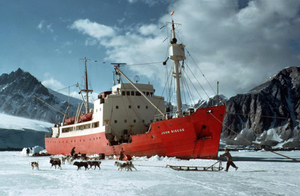 Named in honour of John Biscoe - the...

Ill health must have dogged Biscoe during the remaining ten years of his life, spent as master in the merchant navy, although he appears to have made another voyage of discovery to the south from Sydney in 1838-1839 in the Superb of which little is known. He and his wife and family lived in Sydney and Hobart from 1837-1843. A subscription list headed by the Arctic explorer Sir John Franklin, at that time lieutenant-governor of Van Diemen's Land {Tasmania}, enabled the ailing Biscoe and his family to embark as passengers in the barque Janet Izat for England in February 1843. He died and was buried at sea during the long passage home. Two BAS research vessels have been called after him, as has a street in Stanley. The Biscoe Islands off the Antarctic Peninsula were named on his return from the Antarctic, while Biscoe Bay, at the eastern end of the Ross Ice Shelf, was given his name by Captain RF Scott (Discovery, 1901-04)