French soldier, sailor, explorer, scholar and writer, was born on 12 November 1729 the youngest of four children of Pierre-Yves de Bougainville, a lawyer from a cultivated and well-connected professional family. Bougainville began his career in the French army and from October 1754 he spent nearly a year as a young man in London at the Court of St James in diplomatic duties and attending meetings of the Royal Society, to which he was elected a Fellow at the age of 27 after the publication of his Treatise on Integral Calculus. Recalled to his regiment, he spent much of the Seven Years War in Canada, where he acted as aide de camp to the Marquis de Montcalm, the French commander. He saw action against British forts, accompanied by French regular soldiers and their Indian allies, at whose cruelties, ferocity and insolence he shuddered. He was sent by Montcalm to Paris to ask King Louis XV for men and supplies to prosecute the war in Canada. Instead he was promoted colonel and sent away more or less empty-handed, the campaign in Europe being given priority. On returning to the St Lawrence River in May 1759, he was given duties which kept him from the decisive battle of the Heights of Abraham, during which both his hero Montcalm and General Wolfe fell. At the Treaty of Paris in 1763, Canada was ceded to the British, and France lost most of her other colonial possessions. 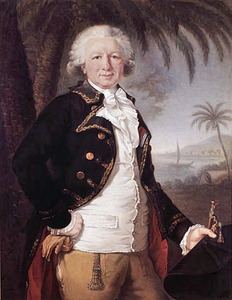 The young colonel pondered on the words of Admiral Lord ANSON on future British expansion into the Pacific, and the strategic importance of the Falkland Islands which commanded the gateway there. On his own initiative, largely at his own expense and with the backing of relatives, Bougainville obtained the permission of King Louis XV to establish a French settlement there. The frigate Aigle and the corvette Sphinx sailed from St Malo on 9 September 1763 under the command of the newly appointed naval captain, Bougainville. In the words of his English-speaking biographer, Michael Ross: 'The officer of the royal armies faded into the past; the sailor had been born'. The twenty-nine settlers were Acadians from Nova Scotia, largely of Breton descent. This was the first expedition ever to set out specifically for the Falkland Islands.

It is interesting that in his original short secret submission to the duc de Choiseul, minister for the Navy, of November 1762, Bougainville intended the Islands to be a springboard for the discovery of the great supposed southern continent (Terra Australis), or failing that for the establishment of a French settlement north of California. The little colony at Fort Saint Louis (Port Louis) flourished for three years and more settlers joined the establishment, which was headed by Bougainville's cousin, Monsieur Bougainville de NERVILLE. 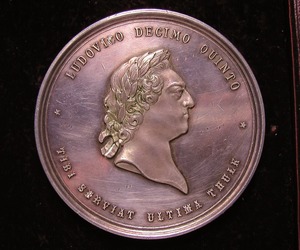 Bougainville returned to France in June 1764 and sailed for the Islands on 6 October with further settlers. On 5 January 1765 he saw his colonists again, and found them happy and healthy. In February Bougainville sailed to the Straits of Magellan to collect wood, closely watching the ships of Commodore BYRON. In April he left once more for France, arriving after a long voyage in August. To his disgust he discovered that, owing to the Family Compact between the Bourbon kings of France and Spain, the Islands were to be formally handed over to Spain. Bougainville visited Madrid in April 1766 to try to persuade the Spaniards to drop their claim and, once he had failed, to negotiate compensation - which was received to the tune of 618,000 livres (roughly £27,000).

As what may be called a consolation prize, Bougainville was permitted by Louis XV to undertake his circum-navigation of 1766 to 1769, in the frigate Boudeuse and the smaller Etoile. He began with a call at Port Louis to witness the handover of his colony on 1 April 1767. A few of his settlers volunteered to stay, but the majority departed in Spanish frigates for the long journey home, apart from ten who joined Bougainville's expedition. This was notable for the discovery of the Louisiade archipelago (off New Guinea) and other islands and for Bougainville's Voyage autour du Monde, with its description of that supposed earthly paradise Tahiti. First published in 1771, a second, augmented edition appeared the following year. An English translation by JR Forster - Voyage around the World - appeared in 1772. In the first volume of this work there is a folding chart (one of a number in the book) entitled Carte des Isles Malouines, nommées par les Anglois Isles Falkland (Map of the Malouine Islands, called by the English Falkland Islands). It depicts East Falkland, with Baye Françoise as the only placename, and also indicates the bay in West Falkland, where it was suspected that les Anglois sont establis (the English are established). The major part of Bougainville's narrative relates to his circumnavigation. However, he does summarise the history of the Islands (believing Amerigo Vespucci to have been their First DISCOVERER) and provides a most interesting account of the French settlement. A whole chapter is devoted to the natural history of the Malouines, based on observations made by de Nerville during his three years there. In describing the loup-renard (the warrah), which rare and often starving fox frequented the coastal dunes, making paths there which the French at first thought must be those of human inhabitants, Bougainville wonders how it can have reached the Islands. Despite the uninviting appearance of the land at first sight: 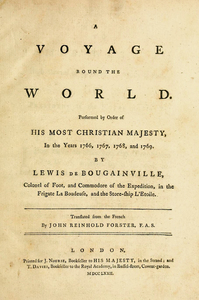 Cover page of the English edition of...

a horizon bounded by bare mountains; land intersected by the sea and whose dominion it seems to dispute; lifeless countryside, devoid of inhabitants; no trees to welcome those destined to be the first colonists; a vast silence sometimes broken by the cries of sea monsters; everywhere a sad uniformity...

on closer acquaintance, it was found that an equable and healthy climate, unsuspected food, peat and other resources made the settlement, with hard work and timber from the Straits, viable. Efforts to plant tree seedlings from the Straits appear to have been unsuccessful, although grain from Europe did grow. In concluding this chapter, Bougainville happily describes the Islands as being like Ireland, with a similar climate and similar advantages. 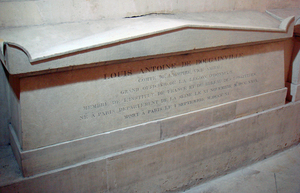 Having proceeded westwards across the Pacific Ocean and then via the Dutch East Indies and the Cape to France, Boudeuse anchored at St Malo on 16 March 1769 followed by the arrival of Etoile at Rochefort on 14 April, the former having lost only seven men during a round the world voyage of well over two years, and the Etoile only two as a result of illness. According to the historian Etienne Taillemitte, Bougainville's narrative of his voyage and the voyage itself made little impression on his French contemporaries, praise and honour being largely reserved for Captain COOK. A minor sensation was caused by the arrival with Bougainville in Paris of the Tahitian Aotourou (Ahu-toru). He sadly died during his voyage home.

Bougainville had become interested in an attempt to reach the North Pole, which materialised in fact as the British (Phipps) naval expedition of 1773. He became a member of the Académie de Marine in 1770. He was given a command during the War of American Independence and was able to take refuge in the countryside with his wife and sons during the worst excesses of the French Revolution. Promoted vice-admiral in January 1792, he resigned one month later from a hopelessly undisciplined naval force at Brest. In 1799 he was appointed Senator and in 1808 became a Count of the Empire. He was to die on 31 August 1811 at his home in Paris, full of honours, at the time when Napoleon controlled all Europe. His ashes were interred at Paris in the Panthéon. 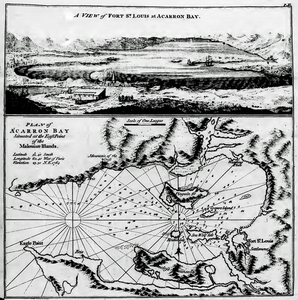 Since he had served his country on land and at sea, it is perhaps fitting to quote here from A History of Arctic Voyages, which he wrote as Citizen Bougainville, published in 1801. In the following paragraph he illustrates the difference between the soldier reaping glory in battle and the lonely navigator in uncharted seas:

A man who has ventured on the path of discovery and who has waged war on land and at sea may occasionally be allowed to compare the courage of the soldier with that of the sailor intent on discovery. In war, all is excitement and comradeship, the uniform, the force of example, the crowd of onlookers; and for each day of seductive danger there are a hundred of enjoyment which flatter one's self esteem. If eventually the soldier perishes, he is among his own, and the laurel will crown the urn where his ashes are laid. But the seafarer, that lonely being, has to fight dreadful and ever-recurring dangers in the vast emptiness between the often threatening sky and waves; it is in every moment of the days and months and years when he needs cold courage, unfailing steadfastness; and moreover he knows that if after a long sequence of strivings eventually crowned by success, he perishes perhaps at the end of his enterprise, no more will remain of him than the wake which his vessel has left on the waves.

In the twentieth century two notable studies, each of two volumes, were published in Paris. The first is the definitive biography by Jean-Etienne Martin-Allanic Bougainville navigateur et les découvertes de son temps (1964)  and the second by Etienne Taillemitte, Bougainville et ses compagnons autour du monde 1766-1769 (1977), which reproduces the surviving original manuscript journals of the seafarers. To end, here is the eighteenth century philosopher Diderot's lively sketch of Bougainville's character:

He loves women, entertainments, fine food, he lives in the whirlwind of high society, to which he lends himself with as good a grace as he did to the uncertainties of the element on which he had been buffeted for so long. He is good-natured and high spirited. He is a true Frenchman, weighed on one side by a treatise on integral and differential calculus and on the other by a voyage around the world. He was well endowed with the attainments necessary to benefit from his long journey. He is philosophic and steadfast, has courage, perception, frankness, a glance which sees through to the truth and cuts short the time for observations, caution, patience, the wish to see, to learn and to be useful; he is mathematical, mechanical, knowledgeable of natural history, geometry and astronomy.

Bougainville's name was given to a large island in the Solomons group and to the strait dividing it from Choiseul Island. He is perhaps best remembered by gardeners who cherish the beautiful climber Bougainvillea. His son Hyacinthe commanded the circumnavigation of 1824-26 in the Thétis but was disappointed in being unable to approach the deserted settlement of Port Louis because of poor visibility.

Bougainville has been credited with the first French circumnavigation, during the years 1766 - 1769, but it appears that this in fact had been accomplished by a number of merchant ships earlier in the eighteenth century. However, his was the first French official circumnavigation and it was the outcome of his own initiative in establishing and then having to abandon the settlement of Fort St Louis on the Falkland Islands. A man of considerable charm, he packed a great deal into his long life. Fortunate in surviving the Terror of the French Revolution, he was honoured by both the Kings of France and the Emperor Napoleon.