governor of the French colony on the Malouines (Falklands), was a first cousin of Louis-Antoine de BOUGAINVILLE the soldier and navigator, who was responsible for the establishment of the French colony. Bougainville de Nerville was a lawyer in the French Parlement, but had little interest in his profession. He admired the Canadian adventures of his younger cousin, Louis-Antoine de Bougainville and resolved that he too would like to see something of the great World. He decided to join his cousin in petitioning King Louis XV and in financing the Malouines project to the tune of 60 or 70,000 livres (Louis-Antoine de Bougainville subscribed 95,000 livres and an uncle, d'Arboulin, 30,000). Like his cousin and the captains of the Aigle and the Sphinx, de Nerville had no fixed salary during the voyage and was carried on the books of the Aigle as an officier major (senior officer) and volunteer. 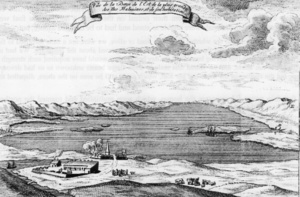 De Nerville was in the first boat to land on the Islands with Bougainville on 3 February 1764. After tents had been erected and some dwellings and a fort for the settlement had been built, early in April, the ceremony of taking possession was held, during which a letter from the King, appointing de Nerville as commander of Fort Saint-Louis (Port Louis) in the îles Malouines was handed to him by Bougainville. Twenty-nine colonists, headed by de Nerville, with a clerk, storekeeper and surgeon were left when the Aigle and the Sphinx returned to France. A further fifty or more colonists were embarked aboard the Aigle when she sailed again from France on 6 October 1764, under Bougainville's command, with royal approval for what had already been accomplished in the Falklands, and with plans for a town, to be called Ville-Dubuc. However, on Bougainville's return to Paris in August the following year, full of praise for his cousin who had 'behaved like an angel', he learnt that his colony was to be abandoned, despite its success. So the Aigle and the Etoile sailed without him in November 1765 arriving in March and February respectively with more colonists, and supplies. The report on the colony brought back for Bougainville at the end of the homeward voyage, praised his cousin's efforts. Beloved by all, de Nerville had done wonders - constructing stores, growing cereals and vegetables and creating pastures, as well as making a reconnaissance of much of the island (East Falkland).

De Nerville sent a letter to Dom PERNETTY written in the Malouine Islands on 25 April 1765, which was carried by BOUGAINVILLE to France giving an account of life in the new colony. Referring to his first winter on the Falklands de Nerville wrote:

It has not been severe, for there was never snow enough to cover one's shoe-buckles, nor a sufficient depth of ice to support a stone as big as one's fist: and if it had not been for the rain, which runs through our tents as through a sieve, we should have had very little occasion for fire, which we were now obliged to make in order to dry ourselves.

He told Pernetty that he would not have known the colony, had he returned because of all the improvements that had been made. These included a fine walk, twenty feet wide, of smooth even ground, a new powder magazine, a fort completely repaired, a bakehouse and a forge. Some 1500 'bustards' had been killed, but his attempts to raise a brood, fostered by a hen, had come to nothing, owing to the 'mischievous tricks of the ship-boys' from France. The heifers and horses had needed no shelter during the winter, while the land was being improved with good dung. Nor was the study of natural history forgotten: de Nerville sent a package of shells, seeds and rocks to Dom Pernetty with Bougainville. The French minister, Choiseul, approved the appointment of de Nerville as major in September 1765, when he was thirty-five years of age.

When Bougainville himself returned to wind up the settlement in March 1767 in the Boudeuse, at the beginning of his celebrated circumnavigation, he had nothing but praise for de Nerville. All was well at Fort St Louis, where the settlement was beginning to take shape. Two fine stone houses had been built for the governor and the clerk cum storekeeper, while the remaining settlers lived in cottages whose walls were made of turf. Timber from the Strait of Magellan had enabled three shops and two schooners to be built, suitable for surveying the coast. Grain from Europe had naturalised, while domestic animals had multiplied. Of the 135 inhabitants all were healthy and in good spirits. In December 1766 the arrival of the British warship Jason (30 guns), Captain John McBRIDE, had surprised the French and had led to an exchange of letters between de Nerville and the British naval officer who was in charge of the newly established settlement at Port Egmont, in the west Falklands.

Bougainville outlined to de Nerville the arrangements with Spain for the abandonment of the French colony, and during the evening of his return, he heard de Nerville's account of the arrival of the Jason. The colony was in due course handed over to the Spaniards, after arrangements had been agreed for compensation for its three promoters and the future of the colonists. The Boudeuse continued on her round-the-world voyage of Pacific exploration, but de Nerville disembarked at Montevideo on 10 November 1767, in order to return to France from Buenos Aires, having found life at sea too uncomfortable to bear.