French priest and naturalist, was born in Roanne (Loire) on 13 February 1716. As a Benedictine monk, he had been attached since 1730 to the Abbey of St Maur at St Germain des Prés, then just outside Paris. When BOUGAINVILLE was planning his expedition to the Falklands, Pernetty was recommended to him as chaplain by the Duc de Choiseul (the senior French statesman after whom Choiseul Sound was named), as an artist well versed in natural history, obliging, eager to please and a friend to all. Pernetty held some highly original opinions and had already published a Benedictine manual, a dictionary of painters and sculptors and a book unveiling the fables of ancient Egypt and Greece.

Pernetty's narrative of the voyage and of his stay on the Islands while the settlement of Fort St Louis (Port Louis) was being established was first published in French in Berlin in 1769, then in a much revised edition in Paris in 1770, followed by two English editions in 1771 and 1773. It is a charming and informative book, very much a personal account, enhanced with folding maps and engravings. The French title of 1770 is quite short: Histoire d' un voyage aux îles malouines fait en 1763 et 1764, avec des observations sur le détroit de Magellan et sur les Patagons, while the English one reads: The history of a voyage to the Malouine (or Falkland) Islands made in 1763 and 1764, under the command of M. de Bougainville, in order to form a settlement there; and of his two voyages to the Streights of Magellan, with an account of the Patagonians... In his 'advertisement to the reader' the English editor hoped that the work would meet with the approbation of the public and listed what changes had been made, mainly in the way of additional maps and a rearrangement of the plates.

The narrative begins: 'I left Paris on the 17th of August 1763 at two o'clock in the afternoon ...' so that the reader is straight away in Pernetty's company before the departure of the Aigle and the Sphinx. His narrative of the outward voyage is always interesting, but cannot detain us here, except perhaps to note his vivid description of 'crossing the Line' (the Equator) while 'Bon-homme la Ligne, lord governor of these latitudes' and his court held sway. Of the Falkland Islands, which he explored a little on his own, encountering at one stage 'an animal of terrible appearance and astonishing size' (presumably a male sea-elephant), Pernetty wrote: 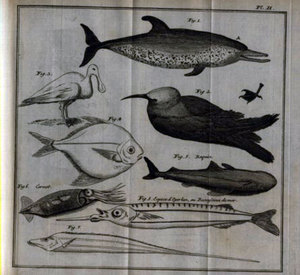 In the quarter of island which we saw, the land everywhere presents a very agreeable aspect. Mountains, or rather eminences which we called mountains, encompass plains further than the eye can see, divided by little rising grounds and hills which communicate by gentle declivities. At the foot of each, a rivulet, more or less considerable, runs in winding mazes, and discharges itself into the sea through the innumerable creeks of the bays.

He protested to Bougainville about the burning (for clearance) of one of the islands in what is now Berkeley Sound, in which 200 penguins died. His fears that the whole 'continent' would catch fire and that game would be destroyed, were further aroused when Bougainville took no notice and set fire to areas of the main island. On one occasion Pernetty went ashore to shoot geese, but got his powder wet so that, on discovering a path nine or ten inches wide, he was in fear of attack by unseen natives of the Islands (supposing that such people existed). He then fixed his bayonet. (The track must have been made by foxes.) It may have been Pernetty's idea to erect a cross on one of the hills, which was named 'Mountain of the Cross'. 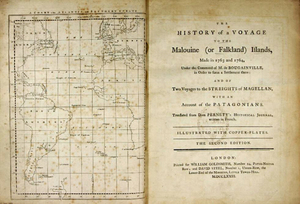 He was much interested in the natural history of the Iles Malouines, and on finding the quartzite rocks too hard to examine, he concentrated on the flora and fauna. He tells us that he stuffed some bird specimens with moss and presented them later to the Abbey of St Maur to be placed in its cabinet of curiosities. He remarks on the beauty of the living birds' eyes. The folding plates at the end of the English edition of his narrative depict fishes, birds, a 'sea-wolf' (presumably a leopard seal), a 'sea-lion', a sea-elephant and some smaller creatures and plants. Perhaps the most interesting of the other illustrations is 'A view of Fort St Louis at Acarron Bay', under which is 'A Plan of Acarron Bay...' Another fine plate is a chart of:

Hawkins's Maiden-land and [called] afterwards FALKLAND'S ISLANDS, then by the French Isles Nouvelles & Isles Malouines, by the Dutch Nova Belgica and lately by the Spaniards of Buenos-ayres Yslas de Magallanes. 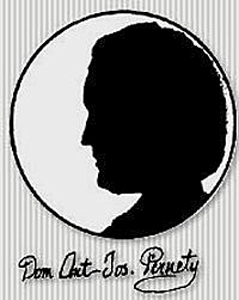 Signature and portrait of Pernetty

This chart was by Thomas Jeffreys, Geographer to the (English) King and place names are sometimes given in two versions.

Before Bougainville's two ships departed from the Islands, a ceremony took place at Fort St Louis, in which Dom Pernetty must have officiated as priest. All present, including the 28 Acadians who were to form the colony, sang the Te Deum, but the wind blew too strongly for a full mass. 'Vive le Roy' was shouted seven times and the commission of King Louis XV was delivered to Monsieur de NERVILLE, appointing him governor. Interestingly, towards the end of Pernetty's book, he prints a letter from de Nerville, dated 25 April 1765, giving an account of the colony and its progress during the succeeding months.

Pernetty made unsuccessful attempts to get the rules of the Benedictine order relaxed, but had to accept his nomination in April 1768 by Pope Clement XIII as abbot of Burgen in Westphalia in north eastern Germany. Later on in 1782, he took up the post of librarian to King Frederick the Great of Prussia, in Berlin. At least three of his books were published there. As one familiar with the occult, alchemy and the Swedenborgian rite, created by the Swedish theosophist Emmanuel Swedenborg, he co-founded the Société des Illuminés d'Avignon in 1786. It seems that the chateau of La Tour Vaucros was put at his disposal by the then Marquess and it became, in the words of its present owner, the focus of 'mystical, philosophical and cultural encounters'. Pernetty died at his brother's house in Valence (Drôme) on 16 October 1801.

A short shrub which grows in Tierra del Fuego is known in the British Isles as prickly heath. Earlier named Pernettya mucronata, it is now identified as Gaultheria mucronata.