naval officer and explorer, was born on 8 November 1723, the second son of William, fourth Baron Byron and his third wife Frances, née Berkeley. He joined the Navy in 1737, and as a midshipman sailed in the ill-fated Wager on ANSON's voyage round the world in 1740-44. In May 1741 the Wager was wrecked on a desolate island off the coast of Chile, and Byron suffered great hardships from hunger and cold before he fell into Spanish hands. After many misadventures he eventually returned to England in 1746. Little of Byron's experiences in those years was known at the time of his appointment to Dolphin in 1765, for he only published his Narrative...of the Great Distresses Suffered by Himself and his Companions in 1768, almost a quarter-century after the event. Like others who sailed with Anson, Byron achieved swift promotion on his return, and became captain in 1746. As commander of the 74-gun Fame he distinguished himself in North American waters during the Seven Years War. Although at the end of the war in 1763 he was placed on the half-pay list, his experiences on Anson's voyage and his more recent service made him an obvious choice to command the expedition being planned for the South Atlantic and the Pacific, though his nickname of 'Foulweather Jack' was not a reassuring one. 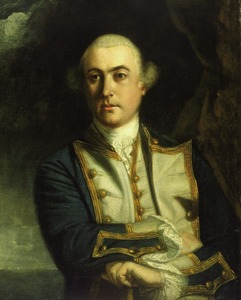 70 Foulweather Jack, against a stormy...

Byron's voyage of 1764-66 was the first of the discovery expeditions of George III's reign which were to culminate in Cook's three Pacific voyages, but in essence the expedition was a revival of that planned by Anson in 1749, only to be abandoned because of Spanish objections. Although Byron's secret instructions struck a new note as they proclaimed that 'nothing can redound more to the honor of this Nation as a Maritime Power, to the dignity of the Crown of Great Britain, and to the advancement of the Trade and Navigation thereof, than to make Discoveries of Countries hitherto unknown', the body of his orders contained little that was fresh. Like the aborted expedition of 1749, Byron was to search in the South Atlantic for (the imaginary) Pepys Island before surveying and taking possession of the Falkland Islands. These, he was told, lay between latitudes 50°S and 53°S. He was then to search for three hundred leagues eastward for any previously unknown lands, a reference to the hoped-for southern continent. The motive behind this first part of the voyage was clear, and had been expressed by Anson in the official account of his circumnavigation published in 1748 which pointed out that to acquire the Falklands would 'even in time of peace...be of great consequence to this Nation; and, in time of war, would make us masters of those seas'. From the South Atlantic Byron was to sail through the Strait of Magellan into the Pacific and then north to Drake's New Albion (an ill-defined region stretching, in modern terms, from northern California to British Columbia) where he was to search for the entrance of the Northwest Passage.

Dolphin was a 24-gun frigate, among the first Royal Navy vessels to be copper-sheathed, and was accompanied by the Tamar sloop. Their crews, unusually, were to be paid double wages, an act of generosity which the Admiralty later regretted as it struggled to avoid it being treated as a precedent for further discovery voyages. The ships left Plymouth in July 1764 under a subterfuge whereby Byron as commodore was officially bound for the East Indies where he was to take command of the station. After calling at Río de Janeiro Byron searched in vain for Pepys Island before sighting the 'high, ragged barren Rocks' of the northwest tip of West Falkland on 12 January 1765. Three days later he reached 'one of the finest Harbours I ever saw in my life', which he named Port Egmont after the first lord of the admiralty. The ships spent almost two weeks in Port Egmont, where the crews picked wild celery and other greenstuffs, hunted seals, penguins and sea-lions, and killed a hundred geese a day, while the surgeon of the Tamar planted 'a pritty little garden'. Before leaving, Byron took possession of 'this Harbour & all these Islands' in the name of George III, fired three salutes from the ship, and served the crew an allowance of brandy. He was also careful to note in his journal that Richard HAWKINS had already carried out an act of possession in 1593 (actually in 1594). Byron then sailed along the northern coastline of East Falkland to 'a very deep sound', which he named Berkeley Sound, but with 'a prodigious great Swell' threatening to carry the ships onto a lee shore they stood off to the north. If they had sailed up the sound to its head they would have found a French settlement, St Louis, established the previous year by Louis-Antoine de BOUGAINVILLE.

HMS Clyde at anchor in view of the...

The rest of the voyage was anti-climactic. Byron made no attempt to search the Atlantic east of the Falklands as he had been instructed; nor, once in the Pacific, did he head north to New Albion. He was back in England by May 1766, having completed the quickest circumnavigation on record. The immediate importance of his voyage lay in his stay at Port Egmont. In a letter of February 1765 to the first lord of the admiralty carried to London in a store ship, Byron had repeated his claim that it was 'One of the finest Harbours in the World', with plentiful supplies of water and wildfowl. He had heard a report that the French had been in the islands 'lately', but he was convinced that as far as Port Egmont was concerned his ships were the first to call there 'since the creation'. Moreover, as he reminded Egmont, the French navigator Frézier in his account of his voyage to the South Seas a half-century earlier had specifically acknowledged that Richard Hawkins was the first discoverer of the Falklands.

Egmont was not slow to respond. Soon after receiving Byron's report he informed the Duke of Grafton (secretary of state for the northern department):

Falkland Island...is undoubtedly the Key to the whole Pacifick Ocean. This Island must command the Ports & Trade of Chili, Peru, Panama, Acapulco, & in one word all the Spanish Territory upon that Sea. It will render all our Expeditions in those parts most lucrative to ourselves, most fatal to Spain...Your Grace will presently perceive the prodigious Use hereafter to be made of an Establishment on this Place by that Nation who shall first fix a firm Footing there. 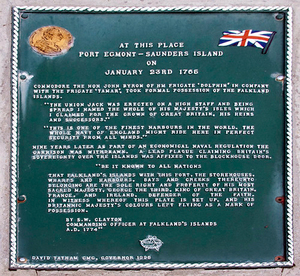 Plaque marking the place when John...

That nation, Egmont was determined, should be Britain, and in September 1765 Captain John McBRIDE with three ships and a company of marines sailed for the Falklands 'to compleat the Settlement begun there [Port Egmont] last year'. The 'Settlement' of 1765 was represented only by the surgeon's little garden, but the British were determined to buttress their claim to the islands with the dual arguments of prior discovery and effective occupation. The stage was set for a contest between Britain, Spain and France that in 1770 took Britain to the verge of war. Three years later Byron's journal of his voyage was printed in the first volume of John Hawkesworth's Voyages, but because of a certain amount of editorial rewriting Byron seemed to pay more attention to Patagonian giants than to the Falklands.

Byron's career after his return from the circumnavigation continued its upward momentum, although it finished on an unsuccessful note. He served as governor of Newfoundland from 1769 to 1772, while in 1775 he was promoted to rear-admiral. In 1778 he was made vice-admiral of the White, and sent to American waters to intercept a French fleet commanded by Comte D'Estaing. Byron with twenty-one ships of the line encountered the French fleet off Grenada in July 1779, but too late to save the island from capture, and the subsequent battle was inconclusive. Ill health forced him to return to England, and he was not again employed. He died on 10 April 1786, leaving a wife, Sophia (Trevannion), two sons (the elder the father of George Byron the poet, the younger a captain in the Royal Navy), and three daughters. 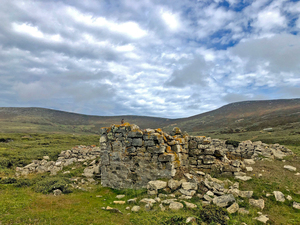 He is remembered by Byron Sound in West Falkland.