naval commander and explorer, was born in Plymouth, the natural (and only) son of Sir John Hawkins. His stepmother (from January 1567) was Katherine Gonson, daughter of Benjamin Gonson, treasurer of the navy. 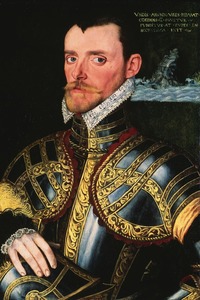 Hawkins's early years are obscure. In 1582 he sailed in his uncle William Hawkins's voyage to Brazil and the Caribbean, and, in 1585, as captain of the galliot Duck, in Sir Francis Drake's West Indies raid. During the 1588 Armada campaign he commanded the Queen's ship Swallow. In 1590, as captain of the Nonpareil, he sailed in his father's Atlantic squadron, despatched to intercept the returning Spanish plate fleets.

In June 1593, intending a reprise of Drake's 1577-80 circumnavigation, Hawkins departed Plymouth in the ship Dainty. By November, he was at the Santa Anna Islands off the Brazilian coast. After taking in water at Isla Grande, the expedition set a course for the Strait of Magellan. On 2 February 1594, Hawkins sighted an uncharted land; according to his later Observations, this was in 48 degrees latitude, but his master, John Ellis, put it at 50 degrees, and Hawkins may deliberately have misplaced his 'discovery' to deflect foreign attention. Driven by a strong westerly wind, Dainty followed the coastline for some 60 leagues (180 miles) thereafter, observing a low, grassy landscape not unlike England's, 'a goodly Champion country [ie well-grassed], and peopled ...' (this from the evidence of fire-smoke). Before departing, Hawkins named the new land Hawkins's Maidenland.

Dainty entered the Pacific later that month and revictualled at Mocha Island, Chile in April. In May, Hawkins and his men stormed and partially sacked the settlement of Valparaiso; but off San Mateo the Dainty was intercepted by two Spanish galleons. Following a three day running fight the badly mauled English expedition surrendered.

Hawkins remained a prisoner, first at Lima and then in a Seville prison, until 1602, when, through the offices of Sir Robert Cecil, he was released. Returning to Plymouth, he became the town's mayor (1603-4) and was knighted by James I. Elected to Parliament and appointed vice-admiral of Devon in 1604, he swiftly gained a reputation for obstructing the operation of tribunals dealing with piracy and for taking bribes from alleged pirates.

Nevertheless, his association with more respectable maritime projects continued, though he was not given a further significant appointment at sea until 1620, when he sailed as vice-admiral in Sir Robert Mansell's unsuccessful expedition against the Barbary corsairs. The rigours of the voyage undermined Hawkins' health; back in England and summoned to appear before the Privy Council on 16 April 1622 to explain the expedition's failure, he collapsed in the council chamber and died. His Observations of his Pacific voyage, begun in captivity and completed shortly before his death, was published in 1622.

Some weeks prior to departing England in 1593, Hawkins married Judith Hele (c 1565-1629) by whom he had four daughters and two sons.

In the early twentieth century, a lively debate ensued on whether Hawkins's Maidenland represented the second sighting by Englishmen of the Falkland Islands. Commander BM Chambers (Geographical Journal, 1901) argued that Hawkins's description of the landmass did not sustain this interpretation, and placed his 'discovery' on the South American mainland. In the same journal, twenty-five years later, H HENNIKER HEATON (later governor of the Falklands) disagreed. His claim that Hawkins navigated Falklands Sound cannot be substantiated; but the protracted westerly course of Hawkins' reconnaissance, if accurately reported, rules out any possibility that he was off the mainland at that latitude, and indicates that he had indeed sighted the Falkland Islands. Sir William Monson, the privateer and admiral, writing two years after Hawkins's death, assumed the land to be a northern promontory of the elusive southern continent Terra Australis.