admiral, was born on 23 April 1697, the younger son of William Anson of Shugborough Park, Staffordshire. He joined the navy in 1712, became post captain in 1724, and on the outbreak of war with Spain in 1739 was appointed as commodore to take a powerful naval squadron to the South Seas. There seemed nothing in his years of peacetime service, many of them spent in trade protection duties, to single out Anson for this task. Connection may provide an answer, for there is evidence that he already had as patron the powerful figure of the Lord Chancellor, Lord Hardwicke, whose daughter he was to marry in 1748. The voyage round the world (1740-44) brought this little-known officer fame, wealth and promotion. In many ways the voyage was a disastrous venture, with huge losses of ships and men, but it was redeemed by Anson's capture of the Acapulco treasure galleon off the Philippines in 1743. On his return home Anson was fêted as a hero in the mould of Drake, and the official account of his voyage was eagerly awaited. When it was published in 1748, A Voyage Round the World...by George Anson became a best-seller. Its first edition attracted more than 1800 advance subscribers, and it went through four further editions before the end of the year. 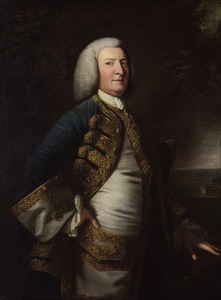 Although the actual writing of the official account seems to have been shared between Richard Walter, the chaplain on the voyage, and the pamphleteer Benjamin Robins, there can be no doubt that the views it expressed were of the squadron's commander, by now Baron Anson of Soberton after his victory over the French fleet at the Battle of Cape Finisterre in May 1747, Admiral of the Blue, and a Lord of the Admiralty. Chapter IX, 'Observations and directions for facilitating the passage of our future Cruisers round Cape Horn', is of particular interest. In it the writer explained that there were two main reasons for the expedition's early problems. The ships had left England too late in the year for the passage around Cape Horn, and they lacked a suitable port of call for refreshments and repair in the South Atlantic. The squadron had called at St Catherine's {Isla de Santa Catarina} off the coast of Brazil, but had found little in the way of fresh provisions or hospitality there, and Anson suspected that its Portuguese governor was passing information to the Spaniards at Buenos Aires. One way of avoiding these obstacles was to find unclaimed territory farther south. Two possibilities were mentioned. One was Pepys Island, allegedly discovered in 1684 by the buccaneer Ambrose Cowley in latitude 47°S. No land exists in that latitude, although this was not known at the time when the account of Anson's voyage was published. The other possibility was the Falklands Islands, 'seen by many ships both French and English' in about latitude 51°S. Among the latter was the privateer Woodes ROGERS who, although he did not land, described the northeast coast in promising terms: 'All this Land appear'd with gentle Descents from Hill to Hill, and seem'd to be good Ground, with Woods and Harbours.' The account suggested that both Pepys Island and the Falklands should be surveyed, but the writer was clearly in favour of the latter because it was nearer Cape Horn and Rogers had sailed from there to Juan Fernandez in the South Sea in thirty-five days. To acquire such a base, the Anson account continued, 'even in time of peace, might be of great consequence to this Nation; and, in time of war, would make us masters of those seas.'

In the months following the publication of the account of his voyage in May 1748 Anson used his position on the Board of Admiralty to urge a new expedition. In January 1749 he reported that the king had agreed that two sloops should be 'sent on Discoverys in the Southern Latitude'. By the end of February the sloops had been chosen, and during March and April they were altered in preparation for the voyage, with John Campbell (who had sailed with Anson on his circumnavigation) in command. He was to survey both Pepys Island and the Falklands before sailing round Cape Horn and into the South Sea where he was to water at Juan Fernández. It was a peacetime re-run, with modifications, of the Anson voyage, and the Spanish government was predictably alarmed by reports of the proposed venture. In response to Spanish protests the secretary of state for the Southern Department, the Duke of Bedford, offered to abandon the Pacific part of the voyage, and stressed that the expedition would limit its activity at Pepys Island and the Falklands to survey work - 'there is no intention of making any Settlement in either'. The Spanish foreign minister, Don Joseph de Carvajal, was far from reassured by these concessions, warning that 'neither He nor any one else could be stranger to the Rise and Intent of such an Expedition, since it was so fully explained in the printed Relation of Lord Anson's Voyage.' He went on to express doubts about British intentions as far as Pepys Island and the Falklands were concerned, which Bedford reported in the following terms: 'If We did not intend to make any Establishment there, What Service could this bare knowledge be of to us?' In June 1749 British ministers, anxious not to upset diplomatic negotiations with Spain on other issues, ordered the Admiralty to drop the entire expedition, although with the caveat that 'His Ma[jes]ty cannot in any respect give into the reasonings of the Spanish Ministers, as his right to send out Ships for the discovery of unknown & unsettled Parts of the World, must indubitably be allowed by every body.' 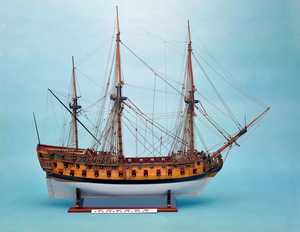 In the event there was no discovery voyage from Britain into southern latitudes until 1764, when Commodore John BYRON sailed for the Falklands and the Pacific. Byron's voyage was the abortive 1749 expedition writ large, and its aims were similar to those pressed by Anson at the time. Anson himself, First Lord of the Admiralty since 1751 save for one brief interlude, died in office on 6 June 1762. Lady Anson had died the year before, and as they had no children the title became extinct. Anson had died in the midst of another war with Spain, still regretting (a ministerial colleague recorded) that he had not secured a settlement in the Falklands. Although George Anson never visited the Falkland Islands he was responsible for setting off a chain of events that eventually resulted in Commodore Byron's voyage to the islands in 1764 and the first British settlement there soon after.

Port Louis was briefly renamed Anson by Governor Moody in the 1840s and the name was also given to the experimental farm opened by government in the 1920s.

Frank Knight; Captain Anson and the Treasure of Spain; Macmillan 1959