naval officer, was the son of Robert McBride, a Presbyterian minister, and raised in Ballymoney, Co Antrim. He may have been born in Scotland prior to his father's settlement in Ireland, but Ballymoney is the more probable birthplace. 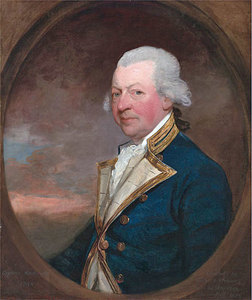 469 Naval officer who commanded an...

John McBride entered the navy as able seaman in 1754 and was promoted to the rank of lieutenant in 1758 after serving four years in the West Indies. In 1761 he was commended for action against the French at Dunkirk whilst commanding the armed cutter Grace, where he is reported to have shown both 'bravery and humanity'. Between 1762 and 1765 he was commander successively of the fire-ship Grampus, the Vulture, the Cruiser and the frigate Renown. In 1765 he was appointed to the frigate Jason and received his orders to command an expeditionary force to the Falkland Islands.

Alongside the Jason, the sloop Carcass and the store-ship Experiment were included in McBride's expedition. The fleet landed at Port Egmont on 8 January 1766. The first few weeks were spent setting up a shore establishment and it was not until 25 January that McBride left to carry out the first ever survey of the western side of the Islands. McBride, however, did not share BYRON's reported enthusiasm for the Falklands, claiming instead that his work there was 'a difficult and disagreeable service in the climate'. He also complained about the rocky terrain and the 'incredible' numbers of 'vermin' on the Islands, by which he meant sea-lions and penguins. Writing back to the First Lord of the Admiralty, he moaned: 'Your lordship will easily conceive what a dreary prospect a range of craggy barren mountains must afford, heightened by almost constant gales of wind'. 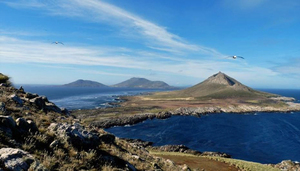 The Jason Islands - named after...

Despite difficulties surveying the area, McBride successfully completed a map of the Islands, which was one of the first satisfactory representations of the Falklands. He also completed the first weather records of the Islands, recorded in his Journal of the Wind and Weather...of the Falkland Islands. McBride was impressed by the port possibilities at Port Egmont, and planted gardens on Saunders Island. However, he wrote back to the Earl of Egmont: 'We are endeavouring to make gardens...[but] my expectations of them are not sanguine. This country, I believe, must have abler Farmers than sailors to make anything of it.'

Goats, sheep and pigs which had been brought out thrived at the new settlement.

Between April and September 1766 a blockhouse was completed, six more gardens planted and two houses built at Port Egmont. A wharf was also constructed and guns erected. Although a modest settlement, it was the British Empire's most southerly possession. In the summer months boats were sent out to conduct a further survey, during which they found a bottle containing the names of BOUGAINVILLE's first (French) expedition. 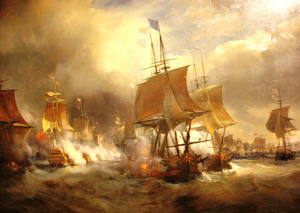 John McBride fought in the...

McBride's instructions had been to request any foreign 'squatters' to leave, but at all costs to avoid hostilities. With the discovery of the French at Berkeley Sound in East Falkland, McBride and several of his party visited their settlement. Although the French commandant M de NERVILLE refused to comply with McBride's plea to vacate the Islands, on the personal level, the British visit was a success, with the two parties proving amicable towards each other. McBride was under instructions not to pursue the matter with any hostility and in 1767 was recalled to the United Kingdom, to report on his voyage.

Before he left the Falklands, McBride renamed the Islands where he and his party had been, in his words, 'the undisputed lords of tempest-beaten barrenness'. Captain RODGERS had named the Islands 'Falkland's Land' in 1708: this McBride changed to 'The Falkland Islands' before his departure.

In 1768 he captained the Seaford at home and for the next seventeen years saw much distinguished service against the French. In 1778 he fought with Admiral Keppel in an inconclusive battle against the French at Ushant. He is also known to have brought to England Princess Charlotte of Meckenburg-Schwerin to marry George III. In 1784 McBride was stationed in the Irish Sea, probably due to his Irish background, where he was described in the Biographia Navalis as having 'considerably advanced the service, as well by the great esteem in which he was held...' Between 1785 and 1790 he became the MP for Plymouth and in 1794 was promoted to rear-admiral of the Blue Squadron. Further action against the French was followed by a final promotion in February 1799 to the rank of admiral of the Blue Squadron.

McBride died in 1800, reportedly of a 'seizure'. He was twice married with several children.

He is commemorated by McBride Head, on the north east coast of East Falkland and in the 1987 'Early Charting' stamp issue.

His ship gave her name to the Jason Islands, north west of West Falkland.

Rev Robert mcBride died in 1718 so John must have been born before that. His sister Jane was born in 1706.