naturalist, was born in Prestonpans, East Lothian and educated at Edinburgh University (MD).

He was appointed physician and naturalist on a survey voyage of HMS Nassau (1866-1869) to southern South America, the first major scientific foray to Southern Patagonia since that of the Beagle.

On 18 Feb 1867 the Nassau arrived in the Falklands for a brief coaling visit and Cunningham made many comments on the flora and fauna. The ship left on 2 March. Cunningham writes: '....we left Stanley Harbour with but little regret'. 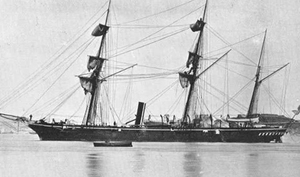 Early in the next year, on 18 Feb 1868, the Nassau made a second coaling visit to the Falklands and Cunningham toured East Falkland, visiting Sparrow Cove, Port Harriet and Mount William making many valuable observations on plants (including seaweeds).

He notes that some locals referred to the unusual plant Balsam bog (Bolax gummifera) as a 'fungus'. The ship left Stanley on 26 January, stopping at Swan Island and at one of the Tyssen Islands in Falkland Sound. Here he was greatly impressed by the Tussac 'grove'. On 30 January the Nassau arrived in Fox Bay. Cunningham made more plant observations, finally leaving on 1 Feb for the Strait of Magellan. 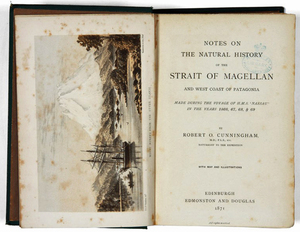 The Natural History of the Straits of...

Cunningham corresponded with Thomas Huxley over DARWIN's collections and theory and with JD HOOKER.

His chief work was The Natural History of the Straits of Magellan (1871).

He contributed papers to the Zoological Society and the Linnean Society and was made a fellow in 1870. In 1871 he was appointed professor of Natural History at Queen's College, Belfast, a position he held until 1902.

In 1885 he married his sister-in-law's sister Mary Jane Davey Luke. They had no children.

On his mother's death he inherited what remained of her half of the library of Adam Smith. Much of this was sold but part is still in the Queen's University library.

Robert Oliver Cunningham; Notes on the natural history of the Strait of Magellan and west coast of Patagonia made during the voyage of H.M.S. ʻNassau ̓in the years 1866, 67, 68, & 69. Edmonston and Douglas; 1871