meteorologist, was born in Govan, Glasgow on 9 May 1921, the son of Daniel Borland and Mary, née Black. Dannie (junior) was one of four siblings, sisters Agnes and Cathie and brother Malcolm. He was also part of a large and closely-knit extended family to which his mother Mary was matriarch. He was educated at Govan High School and Glasgow University, graduating with a degree in mathematics. On leaving university, Borland joined the RAF and was commissioned in the meteorological branch of the RAF Volunteer Reserve. After the War, he worked as a met officer at Renfrew airport for a short time before on 13 October 1948 taking up the position of forecaster in the Falkland Islands Dependencies Survey. He sailed from Southampton in November 1948 on the John Biscoe, as senior meteorological officer with a party of scientists bound for South Georgia. He returned to UK for a stint of leave in 1951, sailing south again on the Southern Opal on 15 Sept 1951. Following leave in 1953, he returned to South Georgia for a further tour of duty. 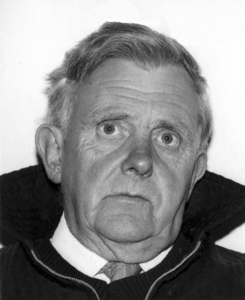 His position was made permanent and pensionable on 21 January 1954 and thereafter, apart from regular leave to the UK he remained on South Georgia as meteorological forecaster until March 1968. The acting colonial secretary reported on his visit to South Georgia in 1958: 'Borland is considered by the whalers to be a first-rate forecaster and he appears to be doing an excellent job. He is rather an odd character but seems to like South Georgia'. His leave passages home, on the most appropriate vessel sailing northward from South Georgia, always seemed to take a long time. The colonial secretary in the Falklands, Tommy THOMPSON, wrote to the Commissioner on South Georgia (DJ Coleman): 'Mr Borland apparently makes a habit of overstaying his leave; on analysis it would be wiser to say he never earns enough to cover the leave South Georgia circumstances force him to take'.

In 1967 the South Georgia Met Service went through an upheaval and Borland was asked to transfer to the Falklands. This he did, accepting the post of meteorological forecaster in April 1968. Thereafter he served continuously in the Falklands, rising to the position of senior forecaster and living at 15 Ross Road West. Because of his splendid forecasting, many of the then scattered community depended on his advice for weather-dependent activities, so he often received gifts of produce from grateful farmers. Visiting him, it was not unusual to see the carcass of his most recent gift of mutton lying in the bath waiting to be butchered! 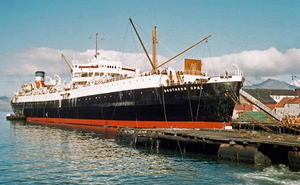 On his 60th birthday, 1981, Borland confirmed he did not want to retire and went on leave to Buenos Aires in November of that year. He was traumatised by the Argentine invasion in early April 1982 and returned to the UK on 15 April, retiring in the same month. He had spent almost 15 years on South Georgia and 14 years in the Falklands, giving him an unparalleled knowledge of the weather and climate in the region. His outgoing and relaxed nature helped him make lifelong friends with many officers and crew from visiting ships. For many years he corresponded with them, also exchanging postage stamps with those who shared his interest in philately. He spoke fluent Norwegian, Russian and Spanish. In the Falklands his position brought him into contact with the Argentinian LADE pilots with whom he had an excellent working relationship. This may well have accentuated the shock of the conflict and the sense of betrayal he felt. He was well-read and travelled, good company, kindly and had a certain taciturn disposition towards authority. To be entertained to a meal in his house was an experience to be remembered. A somewhat unconventional, but friendly character (some might say eccentric), he remained single all his life. His many hobbies included stamp collecting (he had a fine collection of Falkland Island and South Georgia first day covers), photography, opera and classical music, science fiction novels and corresponding with his many friends worldwide. Above all, he was close to his extended family and during his leaves loved entertaining with his famous meals (gargantuan but messy) and regaling his many nieces and nephews with stories of his travels and adventures.

On leaving the Falklands, he at first retired to Dunoon, Argyll in 1983 then in 1993 he returned to Glasgow, where he lived at Shieldhall, some two miles from his original birthplace in Govan. He died peacefully on 22 December 2003.