His father died when he was two and his mother suffered from poor health so his childhood and education were unsettled. Working for a firm of builders' merchants, he volunteered for the Territorial Army and joined the Royal Artillery on the outbreak of war. He rose to battery sergeant major and was commissioned in 1942. In 1944 he was posted to East Africa, but an accident meant that he was detached from the army to work with a district commissioner. 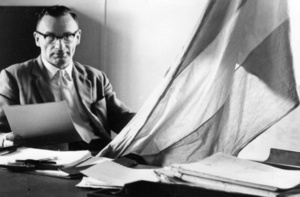 341 The colonial secretary casts a...

Discharged from the army he stayed in Kenya and joined the administration as a community development officer and then district officer. He became an expert in Kikuyu affairs and the origins of Mau Mau and for his service during the Emergency was Mentioned in Despatches and awarded the MBE. He was next appointed the officer in charge of African Courts, a particularly congenial post given his interest in tribal customs.

After Kenyan independence, Thompson was appointed to the Falkland Islands as colonial secretary, arriving on 23 December 1963. When Governor Sir Edwin ARROWSMITH departed, he became acting governor from May until Governor HASKARD's arrival in October 1964. He became acting governor on several later occasions during the absences of the substantive governor. He was also appointed magistrate with jurisdiction in the Falkland Islands, South Georgia and the British Antarctic Territory in January 1964 and acting judge of the Supreme Court with similar jurisdiction in 1965.

During his term as acting governor in 1964, the first signs of Argentine aggressiveness became apparent with sightings of the warship General Belgrano just outside territorial waters and the arrival on 8 September on Stanley racecourse of one 'Senor FITZGERALD' who planted an Argentine flag to which was attached a badly written notice exhorting the inhabitants to 'rise against your usurpers'. Reports on this to the home government brought very little response, although Thompson remembers a signal about not upsetting trade with the Argentine to which Britain was selling thousands of tractors.

The task of communicating with London was difficult with only a Morse code link, not made easier by London's sending ninety per cent of traffic in one-time pad code. This included a new draft constitution which took Thompson and the governor's secretary two days to decode! The only other communication was by ship to Uruguay and then on by airmail. The voyage time was four days and with an average of only one ship a month for eight months of the year this was not a great help.

Whenever he acted as governor he was also sworn in as high commissioner for the British Antarctic Territory although he never once set foot on the ice. He twice visited South Georgia though by the time of his first visit, the last of the shore-based whaling stations had closed with a drop in the population from about two thousand to fourteen headed by an administrative officer. Ships from the Japanese whaling fleet and the Russian deep-sea fisheries still called there, but on increasingly rare occasions.

In mid term Thompson and his wife took home leave and it was during this time in September 1966 that an Argentine civil aircraft, which just happened to be carrying the Argentinian 'Governor of the Malvinas' and his retinue, was hijacked to Stanley Racecourse. In England, Thompson contacted the Foreign and Commonwealth Office only to be told that it was not a matter of any great concern which it was thought could be dealt with 'perhaps by issuing visas'. 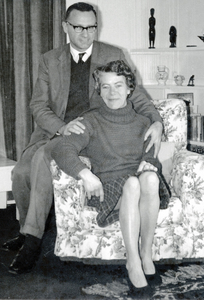 His personal interests while in the Islands were in founding the Falkland Islands Journal in 1967, improving local broadcasting and starting the collection which eventually led to the re-establishment of the Falkland Islands Museum (though this came about long after his departure). He wrote children's stories based on Falklands wildlife which were broadcast on FIBS.

After the Falklands Thompson was appointed as administrator to the British Virgin Islands in 1969, but after a few months was sent to Anguilla where a revolution against independence from Britain was causing HMG considerable embarrassment, especially in the United Nations. Thompson describes this two year period in his life as Gilbert and Sullivan played backwards with no-one looking at the conductor! 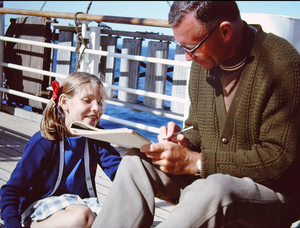 In 1971 he was appointed governor of Montserrat and in 1974 he retired to Essex. He worked for six years in local government and helped on a voluntary basis with Talking Newspapers for the Blind.

In 1963 Thompson married Sheelah Julia O'Grady a member of the Colonial Nursing Service who had served in Palestine, Nigeria and Kenya.

See:  The papers of Willoughby Harry Thompson - lodged in the Bodleian Library Oxford

W H Thompson; The genesis of the Falklands Islands Journal: early search for a letter of support; Falkland islands Journal; 2000