Argentine civil pilot, was born on 8 September 1926 in Buenos Aires. His father, Vouchier Crawford FitzGerald and mother Elizabeth Lawler of Dublin had emigrated from Ireland to Argentina, where they married. Miguel L FitzGerald studied at the Otto Krause industrial school of Buenos Aires and graduated in 1945 as a mechanic/technician. In 1946 he was granted a private pilot's licence, in 1948 he qualified as a commercial pilot, and in 1958 as an airline pilot. He worked for Aerolíneas Argentinas and private employers on cargo and passenger flights. In 1984 he was appointed air instructor and retired in October 1988. His most important achievement was the non-stop flight New York-Buenos Aires on 6-8 April 1962 - reportedly, the first journey of this kind in history - though he is better known for his two flights to the Falklands Islands. 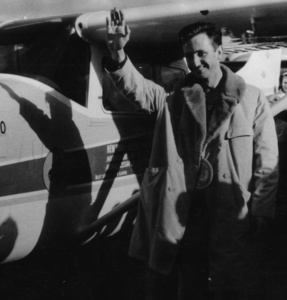 FitzGerald's first flight to the Falklands occurred in the context of Argentine diplomatic manoeuvring before the UN Committee on Decolonisation to claim sovereignty over the Islands. On 8 September 1964 he flew his single-engined Cessna 185 from Río Gallegos to Stanley in three hours and fifteen minutes. He landed on the racecourse, hoisted the Argentine ensign, and left a note with an Islander claiming Argentine sovereignty. He returned to Río Gallegos in four hours. Upon arrival in Buenos Aires, FitzGerald was received as a hero by members of the Tacuara nationalist group, and President Arturo Illia suspended the penalties imposed on him by the Air Force for breaches of air traffic regulations. A formal complaint was filed by the UK at the United Nations, but the Argentine government argued that it was not involved in organising the flight. One consequence of FitzGerald's action was the establishment of a permanent detachment of Royal Marines in the Islands.

In November 1968 Miguel FitzGerald flew again to the Falklands. Since November 1964 he had been flying the twin-engined Grand Commander and the Cessna 206 owned by the company Editorial Sarmiento, publishers of the tabloid Crónica and the sensational magazine Así. In preparation for the arrival in the Islands of the British Minister Lord CHALFONT, Crónica's editor Héctor Ricardo García and FitzGerald decided to try a further landing. This time García wanted to attract publicity during Lord Chalfont's visit. They arrived at the Falklands but, when FitzGerald tried to land on the gravel road leading to Eliza Cove, his aircraft was damaged by the ditches on either side. Falkland Islands Government Air Service (FIGAS) engineers removed the wings from the plane, which was sent back to Argentina on board the transport ship Darwin via Montevideo. 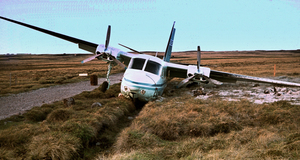 It is almost certain that Miguel FitzGerald did not cooperate with any Argentine government agency or political group in his two flights to the Falklands. There is no evidence of connections with the military or nationalist activists, and he was troubled to find that his exploits were politically manipulated. FitzGerald's Irish ancestry has been frequently cited as his chief motive for protesting against British rule in the Islands. However, both in contemporary press reports and recent interviews FitzGerald argued that he had never been anti-British: 'All my ancestors are Irish but I don't hate the English ... I am pro-Argentine, not anti-British' (interview 11 April 2005). National identity is the one flexible characteristic of most Irish settlers in Argentina; upon their arrival they evolved from Irish to ingleses, and ultimately to committed Argentines. Miguel FitzGerald's emphasis on the Argentine-ness of his actions may be seen as the typical response of Argentine-born children to the English-ness of their immigrant Irish parents, as well as a consequence of their determination to prove to society at large that they were loyal Argentines.

A less frequently mentioned reason was that FitzGerald wished to establish a new flying record. By 1964, among the pilots in the aerodrome at Monte Grande, greater Buenos Aires, there was speculation about the possibility of accomplishing such a flight. Pilots Comi and César Alvarez had tried it in 1954 and failed owing to poor visibility in the Islands. At least with his first flight, this sense of adventure seems to have been a powerful motivation for Miguel FitzGerald, together with his wish to celebrate his birthday in the Falklands.