French naval officer, the second son of Louis de Saulces de Freycinet (1751-1827), had his first taste of exploration while serving in Nicolas Baudin's expedition to Australia (1800-1804).

On the expedition's return to France, Freycinet was responsible for preparing the resulting charts for publication and completing the official account of the voyage. In 1817 he proposed a scientific voyage around the world, to amplify the knowledge of its physical geography. His proposal was accepted and he was given the command of the 350 ton corvette Uranie. His 22 year old wife Rose, however, was determined not to be separated from her husband on what was likely to be a long voyage and, with his connivance, was smuggled on board the Uranie the evening before she sailed. 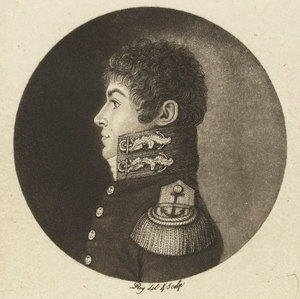 Departing from Toulon on 17 September 1817, Freycinet's voyage took him to various places in the Indian and Pacific Oceans, before sailing from Port Jackson in New South Wales on Christmas Day 1819, bound for France. On suffering damage off the south coast of South America, Freycinet decided to call at the former French settlement of Port Louis in Berkeley Sound for repairs.

However, while entering the sound on 14 February 1820, the Uranie struck an underwater rock, now known as Uranie Rock, off Volunteer Point, the northern entrance point of the sound. The Uranie got off unaided. The damage, however, was extensive and the pumps were unable to stem the inflow of water. In consequence the corvette was run aground on a sandy beach on the southern side of the sound, in what is now known as Uranie Bay, about six miles short of the former French settlement. An encampment was set up on shore, to house the ship's company and as much of the provisions and the expedition's equipment and records as could be salvaged. To feed some 100 men, hunting parties were sent out to search for the wild cattle and horses left behind by the earlier settlers and to shoot geese and seals. 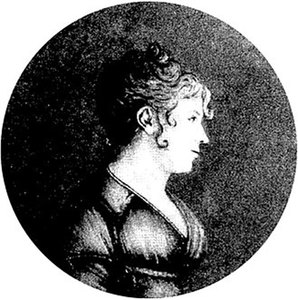 As there seemed little prospect of being found by passing shipping, Freycinet decided that the Uranie's longboat would have to be made ready to sail to Montevideo to seek help. At the same time the observatory was set up near the encampment, which enabled various observations to be made for magnetic declination and presumably variation and, on 15 March, of an eclipse of the Sun. During their stay DUPERREY, the expedition's hydrographic surveyor, completed a survey of the sound, including a large-scale plan of what is now known as Duperrey Harbour.

The expedition's botanist, C Gaudichaud-Beaupré, made a study of the vegetation around Port Louis and in 1825 published the Flore des Iles Malouines, in which he described 64 native species he had collected. On 19 March a cutter, attached to the sealer General Knox of Salem, Massachusetts, anchored off West Point, entered the sound. Freycinet persuaded her master to return to the General Knox, with Midshipman Dubaut, one of the Uranie's officers, to negotiate with Captain Orne to take the Uranie's crew and equipment to Río de Janeiro.

However, before Duhaut returned, the 280 ton vessel Mercury, Captain John Galvin, flying the flag of the United Provinces (the Argentine rebels), entered the sound, having suffered a leak on rounding Cape Horn, forcing him to make for the sound for repairs. Freycinet at once agreed to help repair the Mercury and at the same time entered into negotiations with Galvin to take him and the Uranie's crew to Río de Janeiro. When Duhaut returned with Captain Orne , to complete similar negotiations, these were discontinued in view of Galvin's undertaking.

On 18 April the British whaler Sir Andrew Hammond, Captain Henry Hales, entered the sound after a highly successful voyage. As she was about to sail directly for England, Hales agreed to take dispatches to the French Embassy in London, thus bringing to Paris the first news of the disaster. Before sailing in the Mercury, Freycinet was visited by James WEDDELL, who had earlier written to apologise for not been able to assist. Freycinet was impressed by Weddell and presented him with the Uranie's longboat, as he could not take it with him. Weddell promptly renamed it Rose in honour of Freycinet's wife, who had impressed him with her vivacity and charm. 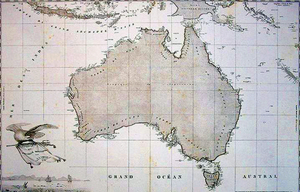 Freycinet's map of Australia - the...

The Mercury set sail on 27 April, but Freycinet's problems were not over. On the way north Galvin objected to making for Río de Janeiro on the grounds that not only might his vessel be seized by the Spanish Consul there, but that he might be imprisoned for carrying weapons for the Chilean patriots in Valparaiso. Freycinet overcame this problem by purchasing the Mercury from Galvin, renaming her the Physicienne. Now in command of his own vessel once more, Freycinet called at Montevideo to land Galvin and later at Río de Janeiro and Cherbourg, before anchoring in Le Havre on 13 November 1820, three years and fifty-seven days after the expedition left Toulon.

In 1832 the Freycinets were living in Paris when there was an outbreak of cholera. Freycinet was struck down, but being devotedly nursed by Rose he recovered. The cholera then attacked Rose and in twenty-four hours she was dead. Freycinet lived for another ten years, dying in Mirmande (Drome) on 18 August 1842, just after his sixty-third birthday.

See:  Freycinet in the Falklands

J. Arago:  Narrative of a Voyage Round the World in the Uranie and Physicienne, Corvettes Commanded by Captain Freycinet; London; 1823