French naval officer, was born in Paris on 21 October 1786. He joined the French navy at the age of 17, taking part as a sub-lieutenant in charge of hydrography on FREYCINET's voyage of 1817-20, during which the Uranie was wrecked in the Falklands. Duperrey was promoted on his return and awarded the Cross of St Louis, presumably in part for his survey work. 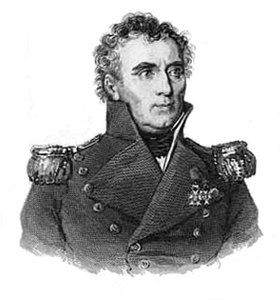 A year later, he and Dumont d'Urville submitted plans for a voyage of Pacific exploration. The corvette Coquille (380 tons), commanded by Duperrey, departed from Toulon in August 1822, and from Brazil on 30 October for the Falklands, where the Uranie wreck was still visible. After rounding Cape Horn, the expedition visited numerous Pacific islands, including Tahiti and nearby Bora Bora, the Solomons and New Ireland, reaching New South Wales via Timor in January 1824. After two months in Australia, the Coquille visited New Zealand, then passed through the Gilbert and Ellice Islands and the Carolines, arriving in Marseilles via the Dutch East Indies {Indonesia} and Mauritius in March 1825, no man having been lost. The Coquille carried two naturalists, René Primevère LESSON (who wrote a two volume narrative) and Prosper Garnot. The scientific results were impressive and were published as a magnificent set between 1826 and 1830. Duperrey wrote the narrative of this round-the-world voyage and other volumes. He was promoted on his return and was later elected to the Académie des Sciences of which he became president in 1850. He was also appointed a member of the Légion d'Honneur.

Chapters VII and VIII in Duperrey's Voyage autour du Monde (Voyage around the World) relate to the stay in the Falklands of November and December 1822, describing with some emotion the melancholy sight of the Uranie, battered both by easterly gales and the axes of many whalers. Dumont d'Urville (second-in-command) made a two-day botanical excursion to the summit of a hill he called Châtellux {Mount Usborne} west-south-west of their anchorage. Numerous physical observations were made from the observatory erected among the ruins of BOUGAINVILLE's settlement. So much fresh meat and fish was caught that the sailors asked for a return to their shipboard diet of salt pork and salt beef! 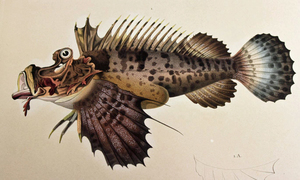 An illustration from Duperrey's book

In his second chapter, Duperrey summarises the history of the Islands, and then goes on to describe them, remarking that the monotony of the landscape aroused a profound sadness in the observer. The whaling captains, he said, maintained that the climate of the islands had become warmer. Duperrey describes the dangers and advantages of Berkeley Sound from the mariner's point of view and again refers to Dumont d'Urville for its vegetation. No trace was found of the seeds sown by Bougainville and by the botanist of the Uranie, Charles Gaudichaud. However, wild horses, cattle, pigs and rabbits had multiplied rapidly. No sign of the native fox was seen. For a description of West Falkland, unvisited by the Coquille, Duperrey cites James WEDDELL; he also relates the story of Captain BARNARD. Among the fine coloured plates in the atlases of natural history (Paris, 1826) is one of the so-called Antarctic goose, described as Anser antarcticus Vieillt, les îles Malouines, No. 50. A set of the splendid published expedition results is in the library of the Royal