French natural scientist and naval pharmacist, was born near Rochefort on 20 March 1794, the son of a clerk in the French navy. Lesson made his career in the naval medical service being largely self-taught in natural history, his great passion. He sailed in the Coquille, commanded by Louis DUPERREY, on a round the world voyage of discovery and scientific exploration from 1822 to 1825, being one of two surgeons responsible for aspects of natural history. They brought back to the Muséum d'Histoire Naturelle in Paris a great many specimens, some of which were hitherto unknown. Over three hundred specimens were geological. 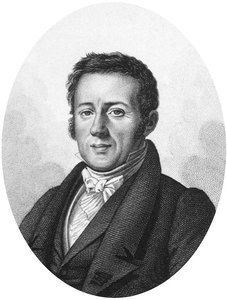 Lesson contributed to the magnificent illustrated volumes of scientific results, which he wrote up in Paris for four years after the Coquille's return, becoming acquainted with a number of prominent scientists there.

He then returned to Rochefort, where he taught botany and was made professor of pharmacy, and in 1835 the senior naval pharmacist. He had been elected two years earlier to the Académie des Sciences. A list of his publications and a summary of his life and work can be found in the Dictionary of Scientific Biography (New York, 1973). 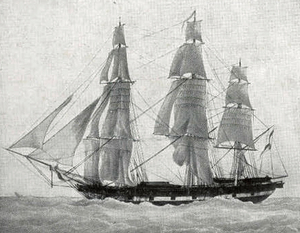 The Coquille spent a month in the Falklands from 18 November to 18 December 1822, anchoring in the Baie Française {Berkeley Sound}. Lesson's two volume narrative of the circumnavigation, published in Paris in 1839 is entitled, Voyage autour du monde . . . sur la corvette la Coquille. His engraved portrait is the frontispiece. The style is personal and the narrative begins: A Voyage around the World!!! These magic words unleash all my thoughts: the most burning wish of my heart is thus fulfilled! The voyage took him away from the familiar scenes of his life with his willingness to ignore the dangers of a very long voyage.

The bulk of the book describes the Pacific islands and other warmer and more exotic locations than the Malouines. Nevertheless his closely written account of visits ashore there (p 44-70 of Vol 1) and of the Falklands' flora and fauna (with occasional references to PERNETTY's work) is interesting. The plate facing p50, captioned Etablissements Français aux Iles Malouines (French Settlements on the Falkland Islands) shows the tents of the Coquille's observers amid the deserted buildings of BOUGAINVILLE's Port Louis. The first thing Lesson encountered there was the grave of an English mariner. He remarks on the tameness of the birds and animals of the Falklands. 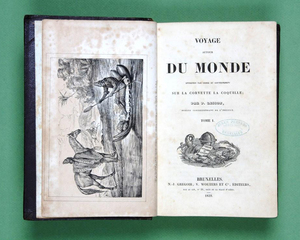 With Dumont d'URVILLE he walked across a stretch of level ground, which was smoking as a result of the fires lit by the sailors and not put out, towards a range of hills. He describes the great boulders, which from a distance appeared like the ruined chateaux of the French province of Dauphiné or the remains of a deserted monastery. The landscape, where troops of wild horses and cattle roamed, was dominated by Mount Chatellux {Mount Usborne}. In contrast to the bare ground of the mainland, grazed by these herds, Lesson found a taller and more flourishing vegetation on the islets, which provided shelter for seals and penguins. He makes no mention of the native fox, the warrah.