lawyer and Falklands campaigner, was born in Downe (Kent) on 18 August 1922, the eldest of three sons of Harold Alfred Hunter Christie, QC, TD and his wife Norah Agnes Veronica, née Brooks. He was the grandson of Sir William Christie, Astronomer Royal and great-grandson of Professor Samuel Hunter Christie, Secretary of the Royal Society. He was educated at Marlborough. After winning a place at Trinity Hall, Cambridge, he volunteered for the Young Soldiers Battalion of the Royal Berkshire Regiment in 1940 from which he was posted to Sandhurst; commissioned into the Coldstream Guards in 1941, seriously wounded in 1943 and invalided out in 1944. He then joined the South American Department of the Foreign Office, and was appointed third secretary to the British Embassy, Buenos Aires 1946-1948. 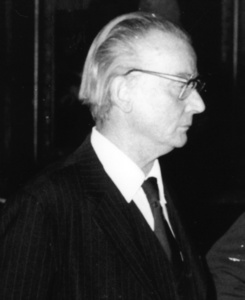 His period in the Foreign Office first brought to his attention the Argentine claim to the Falkland Islands. While serving at the Embassy in Buenos Aires it was his task to master the past history of the Islands, and of the Falkland Islands Dependencies, in order to answer the claims which were then being forwarded by the Argentine Government. At one official function he talked to President PERON, who stated quite openly that he intended to resurrect the Argentine claims, as a means of gaining political support. It was also on one occasion his duty to dance with Eva Peron, which he described as 'like dancing with a tigress on heat'. Christie returned from Argentina in 1948 to read for the Bar. Dr Brian ROBERTS, Senior Research Fellow at the Scott Polar Research Institute, suggested to him that he should research and write a history of the Falkland Islands to counter Argentina's claim. Christie had been much concerned by this claim, and consequently spent 1948 and most of 1949 at the SPRI writing The Antarctic Problem,which was published in 1951 by Allen & Unwin.

On 20 May 1950 he married Merle, elder daughter of Roderick and Dorothea MacLeod, at Lincoln's Inn. They had four children: Robert (b1951), Fiona (b1955), Niall (b1960) and Catriona (b1968). He was called to the Bar at Lincoln's Inn in 1952, became Head of Chambers in 1979, and a Bencher in 1989. He had a busy general Chancery practice, specialising in the petroleum industry, charity law, EEC law, and the rights of highways & inland waterways. In 1948 Christie had bought a canal boat hull, and he and his wife converted it into a houseboat, spending all holidays for the next five years exploring what still survived of the canal system. In 1950 he became a Council member of the Inland Waterways Association, and spent a considerable time lobbying on behalf of the restitution and maintenance of canals, with particular reference to amending the Transport Act of 1962. He undoubtedly acquired and honed his knowledge of Parliamentary lobbying at this time. He was a member of Chelsea Borough Council from 1956 to 1965, and was involved with several local charities in Chelsea. Christie was elected to the Court of the Worshipful Company of Clockmakers in 1968, and was Master in 1979. He had grown up in the country with an abiding interest in natural history, farming and country sports. His leisure time for forty years was spent at the family cottage in Sussex, where he could pursue his interest in forestry. 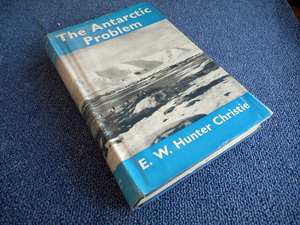 Following his four years in the diplomatic service, Christie took a continuing interest in the future of the Falkland Islands, and from 1968 devoted ever-increasing time to this. The resultant political lobby was described by the historian Michael Charlton as 'a totally uncompromising lobby' and 'one of the most influential lobbies in modern British politics'. 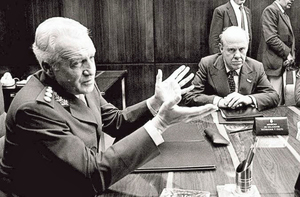 To assist the people of the Falkland Islands to decide their own future for themselves without being subject to pressure direct or indirect from any quarter.

In 1974 Christie initiated the first annual Falkland Islands Reception in Lincoln's Inn, at which Earl Mountbatten of Burma was guest of honour. This was attended by Members of both Houses of Parliament from all political parties, representatives of the media, potential supporters, and Falkland Islanders resident in the UK. Thereafter this function became an annual event, and since 1983 has been organised by the Falkland Islands Government Office. He also inaugurated the annual wreath laying ceremony at the Cenotaph in December, to commemorate the Battle of the Falklands (1914), the Battle of the River Plate (1939) and since 1982 the Falklands Conflict.

In 1975 Christie spent three weeks in the Falkland Islands. He held 11 formal meetings in Stanley, including a public one with 220 people present, and public meetings for the inhabitants of 12 settlements in Camp. He made 34 calls in Stanley involving interviews and exchanges of view. He concluded that the people of the Islands were adamant in their desire to remain British and that strong indirect pressure had been put on the people of this small community to change their allegiance against their will. In 1975 and 1976 Christie strongly supported Lord SHACKLETON's Economic Survey of the Falklands Islands, and assisted in briefing Lord Shackleton and his team.

It was during this period that Dr. Nicanor Costa Mendes, Argentine Minister for External Relations l966-69 and 1981-82, referred to Christie as 'another devilish lawyer' which greatly entertained him. In 1978 the Association formed the South Atlantic Fisheries Committee, of which he was also chairman. This Committee campaigned continuously for a fishing zone round the Falkland Islands, which was eventually declared by the British Government in 1986. The ensuing productive fishing included large quantities of squid, and Christie used occasionally to refer to a letter received by the Committee before the imposition of the zone, signed by a minister of state, containing the sentence 'my expert advisers tell me there are no squid in the seas around the Falklands'.

In 1981 the Association established the United Kingdom Falkland Islands Trust, a registered charity which provides grants for educational and agricultural objectives. The Association also took an active part in the formation of the Falklands Foundation, a registered charity now known as Falklands Conservation. Christie was invited by the Falkland Islands Government to attend the Heritage Year celebrations in 1992 and spent two weeks in the Islands; travelled extensively there, and was much impressed by recent developments. He had a major heart attack later that summer, and thereafter was not allowed to fly. He was awarded the Freedom of Stanley in 1994, and regarded this as the greatest honour he could receive.

He retired from a long and successful career at the chancery bar in February 1997, and died of cancer and heart failure on 21 September 1997. A memorial service was held in Christ Church Cathedral, Stanley, simultaneously with the memorial service held in the chapel of Lincoln's Inn, on 25 November 1997. In the eulogy in Stanley, Councillor Mike Summers said:

Bill probably achieved more for the people of the Falklands than any other individual...and he never told us what to think or what to do, but he believed passionately in our right to determine that for ourselves. He would never accept that others had the right to make that decision.