Dutch Roman Catholic priest, was born on 22 November 1913 in Amsterdam. He was educated at the Mill Hill Fathers' colleges in Tilburg and Roosendaal in Holland and at Mill Hill in north London. He was ordained priest at Westminster Cathedral in 1938 by Cardinal Hinsley and appointed to the teaching staff at Hoorn College where he taught until 1945. He left for the then Belgian Congo in 1946 (from whence he had to withdraw during the troubles of 1964) after having served in a number of different locations in the Bansakusu Mission. 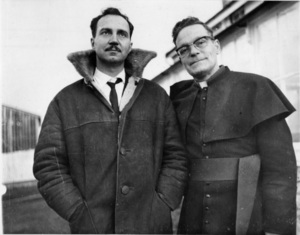 In 1965 Roel was appointed to the Prefecture of the Falkland Islands where he ministered until 1971. His moment of fame as a mediator came on 28 September 1966 when an Aerolineas Argentinas DC4 flight was hijacked by the CONDOR Group and forced to land at Stanley Racecourse. This hijacking ended in a stand off, with the armed hijackers holding several hostages and the authorities blocking the racecourse. Eventually the hijackers asked to speak to the Roman Catholic priest, and Roel arrived and virtually secured the group's surrender. Passengers were billeted in different homes around Stanley and the hijackers, after surrendering their arms and weapons to the plane's pilot Comandante Ernesto García, were detained for 48 hours at St Mary's under heavy guard.

Roel did not always agree or see eye to eye with his immediate ecclesiastical superior Monsignor Ireland and during the latter's absence from the islands, Roel would do his own thing. He arranged the installation of a new east window in St Mary's church with a star motif (St Mary's was also known as 'Star of the Sea') using some Victorian coloured glass which had been stored at Government House. He started a small monthly family magazine, the St Mary's Herald, which was produced monthly on a roneo machine and sold for sixpence. He is fondly remembered by the Argentine historian and Baptist minister Dr Arnoldo Canclini, who was invited by the Rev Peter MILLAM to preach at Stanley Cathedral. Canclini recalled that Roel 'was the first person I met in 1967 as he went aboard the ship and took my bags down. Afterwards I found him when the Governor invited me (and him) to lunch. He was a very kind person as I can remember'. 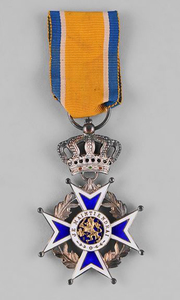 Insignia of the Knight of the Order...

Roel was transferred to Uruguay in 1971 and served the Sea Apostolate until 1975. He then moved to the USA where he was a hospital chaplain in New York until 1981 and briefly held a similar post in Pasadena, California. He was decorated by the Queen of the Netherlands with the prestigious honour Knight of the Order of Orange Nassau. On holiday in the Netherlands, he was found dead at his brother's house on 1 January 1982.