Jesuit priest and author, was born on 6 October 1707 in Manchester, the son of Thomas Falkner an apothecary. He studied medicine in London and mathematics and physics under Isaac Newton. In 1730 he arrived in Buenos Aires as a ship's surgeon on board a slaving vessel. Falling seriously ill, he was much cared for by a Jesuit priest and converted to Catholicism. He entered the Society of Jesus in Paraguay in 1732 and was ordained in 1739. He worked initially in Paraguay and then in Santiago del Estero, Tucumán, Córdoba and Santa Fé. He studied Indian dialects and in 1748 joined Fr Matias Strobel on an expedition to Río Negro. He lived on horseflesh and used his hat for a plate, which because of its greasy condition was eaten by wild dogs while he was asleep. By 1756 Falkner had moved to Córdoba and it is probable that he occupied the new chair of mathematics in that city. 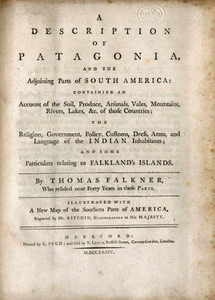 After the expulsion of the Jesuits from Argentina in 1767, Falkner sailed for England on the Swedish ship Venus in January 1768 and became chaplain successively to Robert Berkeley at Winsley, Herefordshire and the Plowdens at Plowden Hall, Shropshire. It was while living with the Plowden family that he died on 30 January 1784 and was buried at Lydbury North, Shropshire.

His book A Description of Patagonia, and the adjoining parts of South America ... and some Particulars relating to Falkland's Islands was published in Hereford in 1774. The Preface to this book places its composition in the context of the contemporary dispute between Britain and Spain over the Islands, and rather quixotically urges an alliance between the two countries. But only three of the book's 144 pages are devoted to 'Falkland's Islands': Falkner had not visited the Islands himself but had received accounts from Spanish officers who had 'received' the country from the French in 1767 and from a French gunner who was a fellow passenger on the Venus. The account is thoroughly depressing and indeed Falkner maintains that BOUGAINVILLE had intended to abandon his settlement at Port Louis, but had tricked the Spaniards into paying compensation for making it over to them. Falkner's work contains much interesting information on the South American Indians, derived from his missionary work among them, and is considered a classic. It was used by Charles DARWIN on the voyage of the Beagle.

See:  A Description of Patagonia, and the adjoining parts of South America ... and some Particulars relating to Falkland's Islands; Hereford; 1774

Thomas Falkner; A Description of Patagonia, and the adjoining parts of South America ... and some Particulars relating to Falkland's Islands; Hereford; 1774