Roman Catholic priest, was born on 5 December 1823 at Whitefield, Tramore, Co Waterford, eighth of the eleven children (nine boys and two girls) of Michael Foran and Bridget, née Dooley. His father appears to have been a nephew of Dr Nicholas Foran, Catholic bishop of Waterford and Lismore. His early education was at a Latin School close to home; then at St John College, Waterford. Subsequently he studied theology at Maynooth College, where he was ordained in 1857. He immediately went to England and joined an elder brother, Fr Robert Foran, in the diocese of Hexham and Newcastle working with Irish immigrants in the impoverished city parish of St Andrew's, Pilgrim Street. In 1860 he moved to a new mission at Walker near Newcastle. He dearly loved the people of Walker and during the next fifteen years he would build a large church, a presbytery and several schools. 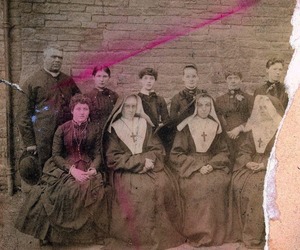 Somehow Foran became aware of the precarious spiritual condition of Catholics in the Falklands. He appealed to his bishop Dr Chadwick to be allowed to work there; his bishop agreed and Cardinal Manning was involved in making all the various arrangements with the relevant Vatican authorities to allow Foran to work in the Islands. He left Walker on 17 September 1875 on the long sea journey which was broken with calls at Lisbon and Río de Janeiro before arriving in Montevideo. He then sailed on the FIC schooner Black Hawk for Stanley where he arrived on 3 December. He was well received by Governor D'ARCY and lived for a while at Government House before obtaining his own residence. His journal notes are revealing:

I have often wondered how coolly and quietly I took my departure, fully aware of the "breakers ahead", which at that distance seemed to have no terror for me. I am full of sadness now that I have arrived at my destination...The desires of past years are now accomplished. How often have I wished that I should be favoured with a sight of this country.

It was a tough and arduous climate in which to work but with his accustomed energy he soon organised his preaching ministry, started catechism classes as well as Sunday School in Stanley and also travelled in the Camp by horse and around the islands by schooner to visit the distant faithful. There was work to be done and soon he opened a school under the care of Samuel Walker, a teacher from his former parish of Walker. Life was hard and it was not without reason that Governor TF CALLAGHAN would describe the islands as 'one of the most backward of Her Majesty's colonies'. One of the few gripes Foran ever expressed was over the irregularity of the mail and he often comments in his letters about waiting for the post.

Solitude and the harsh climatic conditions took their toll and so from 1881 Foran would divide his time between his mission to the Islanders and the rural Irish community in Argentina. During the next five years he would reside at San Nicolás de los Arroyos (Province of Buenos Aires) and travel back and forth between the Islands and Argentina via Buenos Aires and Montevideo. During the months of January and February of 1886 the church which was built for and by Catholics and opened in 1873 on Pump Green was moved to a site acquired by the Catholic community on the 'Front Road'. Foran took his final leave of the Falklands on 20 April 1886, staying at San Nicolás for some six months before sailing for Naples on 18 October. From there he went to Rome to advise the missionary organisation, Propaganda Fide, about his labours and on the way back to Newcastle gave a lecture about the Irish community in Argentina to students of the Irish College, Paris.

In a letter of 15 April 1886 to Mrs Caroline D'Arcy, widow of the former governor, and written just five days before leaving Stanley, Foran revealed his true feelings: 'As I am now preparing to leave the Falklands I think it is only right that I should tell you so. I have remained in this place longer than I intended. I am sorry however that I go away without having done any lasting good. I have attempted several schemes to put the Mission on a lasting footing - and all failed'. He was always the humble priest.

By 1887 Foran had returned to the diocese of Hexham and Newcastle and was installed as parish priest of Blackhill, County Durham. He was back, and although not their priest, the people of Walker who loved him so much, presented him with a formal address of welcome home. He died on 29 January 1900. An editorial in the Consett Chronicle of Friday 9 February 1900 observed:

None who knew him but loved him, none but felt their hearts drawn towards him, to the last by his gentleness, his sympathy, his love of Nature, and, above all by his gentleness and unaffected humility ... Energetic and assiduous in the performance of his priestly duties, Father Foran was admired and loved. In the pulpit, or the platform, the homely language, the gentle, earnest, impressive manner of this kind old man fixed the attention and won the hearts of all. His life was devoted solely to the poor. No home was too mean or miserable for his visits - no sick parishioner too ragged or wretched to be sought out and comforted by him. He looked upon men as children of God, on all Christians as the redeemed of one Saviour.

There are two known photos of Foran both held in the Archive of St Mary's Church in Stanley. One, with a group of six ladies in Victorian dress and three sisters of the Congregation of the Sisters of Charity of St Paul the Apostle, was taken sometime between 1887 and 1899 at St Mary's Primary School, Blackhill. The other is a head and shoulders portrait.