business man and councillor, was born in Stanley on 15 February 1898, the eldest son of Arthur Hardy, baker, and his wife Mary (Min), née Brown. The family ran Stanley Bakery, in the stone building at 44 John Street and Les was educated at the Government School. In 1922 he married Edith Isabella Pearce, the daughter of John Pearce, keeper at Cape Pembroke Lighthouse. They had one son, Jack Arthur (Tony) born in 1926. 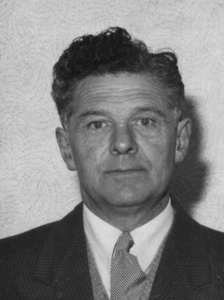 Les Hardy was probably the most successful local business entrepreneur of his time. He lived at and owned Montague House, 40 John Street. In the front of his premises he operated a very up-market retail outlet, the Kelper Store, where he sold fancy goods, fashion jewellery, confectionery, ice cream, toys, magazines and periodicals. He was also agent for Philips and Hoover electrical appliances and Hillman cars and trucks.

In the back room on Villiers Street he had a cinema which screened silent films and then moved to the Gymnasium in 1938 when 'talkies' were introduced for the first time. This cinema transferred to the Town Hall in 1953. To the rear of the Kelper Store was his Pioneer Mineral Water Factory, producing all the soft drink requirements of the day: tonic water, soda water, lemonade, fruit flavoured cordials and so on. 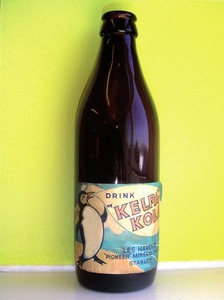 It could be said that World War II contributed hugely to his already thriving business when 1,700 troops were garrisoned in Stanley, calling for unprecedented volumes of mineral water products, but his hard work and dedication were the secret of his success. He was very competitive and frequently could be observed visiting competitors' shops, comparing prices and adjusting his own accordingly. In 1947 he bought Stanley Cottage on Ross Road and established Stanley Cottage Tea Rooms and a retail outlet for ladies fashion attire, ice cream and confectionery.

All his life Les Hardy was active in community affairs. He was a leader of the Islands Scout movement during the 1930s and a great supporter of local charities. He served on many government boards and various committees, including Stanley Sports Association.At one time he was superintendent of Stanley Voluntary Fire Brigade. Both he and his wife were pillars of the Cathedral. 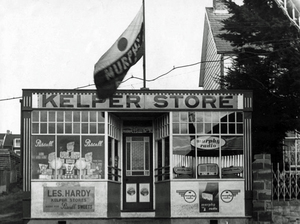 He was made a JP in 1946 and in the same year was awarded the British Empire Medal. In 1948 he became the first chairman of the newly-formed Stanley Town Council. In 1949 he was elected to LegCo, becoming senior elected member in 1952. In 1960 he was awarded an OBE in the Queen's Birthday Honours and was still a serving member of LegCo at the time of his death on 6 February 1962.

Hardy was a very active figure, who found it difficult to sit still and relax. He always smoked a pipe and was teetotal, never having drunk alcohol in his life. A man of cheerful and sober disposition, he had a great sense of humour. In paying tribute to Les Hardy at a Council meeting on the day of his death, Governor Sir Edwin ARROWSMITH, having mentioned 'his distinguished record of public service'. added 'I shall always remember his love for children and flowers and the happy twinkle that was never long absent from his eye ... but I think what I shall remember best of all was his pride in being a Falkland Islander'. 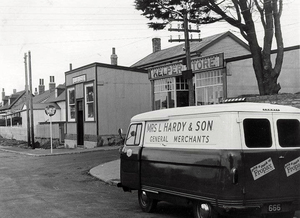 Editorial comment:(1) Arthur Hardy was one of the main participants in 1948 Petition to the Colonial Office asking to have Governor Sir Miles CLIFFORD removed from office. Along with Karl LELLMAN Hardy was a leading light in the protest. Hardy eventually became reconciled to Clifford and his reforms.