mariner and farmer, was born in Stanley on 30 January 1893, son of John Davis, shepherd and sailmaker, and Elizabeth Ann, née Brown.

Elizabeth Ann was the widow of Robert Hutchinson and already the mother of four children when she married John Davis. They went on to have another ten children, of whom Jack was the eldest, so he grew up surrounded by a large family. 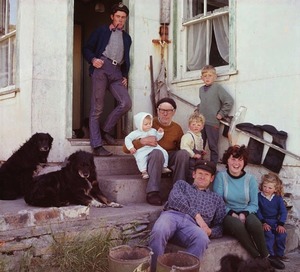 His father worked in the FIC sail loft, which may have sparked the interest in the sea that was to colour Jack's whole life.

He began his career on boats at an early age and in 1917 he first appears in FIG records as master of the cutter Indiana, running general cargo around East Falkland and working the tussac islands. He sailed her for about five years and in 1924 bought a half share (with Vere Falkland Summers) in the 24 ton wooden sailing ketch Perfecto Garcia. This larger vessel enabled him to venture slightly further afield and he began to include West Falkland in his voyages, although still undertaking the same kind of work.

For a time in the early 1930s he worked in sealing at Albemarle and commanded the sealing vessel Port Richard (later known as the Afterglow) for the Falkland Islands Sealing Company.

Other boats owned at one time or another by Jack Davis included the cutter Paloma and the ex-government pilot boat, Penguin.

Early in World War II, the Perfecto Garcia went ashore in a gale and had to be broken up. She was a great loss, both to Davis and the local community as a whole. In 1952, as part of a local consortium, the Intercoastal Trading Company, Jack acquired part-ownership of the largest of his fleet, Protector III. She was a 162 ton wooden motor vessel built in Novia Scotia in 1944 as a minesweeper for the Royal Navy and brought to the Falklands by the Colonial Development Corporation in 1949 to work at Albemarle Sealing Station. 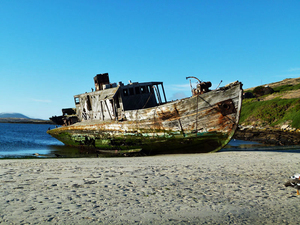 Although Jack Davis spent much of his life at sea, he was also interested in farming and in the late 1930s rented Hummock Island from Roy Cove, where he ran about seven hundred sheep.

After World War II he also briefly rented the Jasons from Dean Brothers.

In 1949 he bought New Island from George Scott and farmed it for the next twenty years. With the island, he inherited two more vessels, the cutters Overseas and Saxon. When the Intercoastal Trading Company was dissolved in 1954, Jack also became the sole owner of Protector III, but could not afford engine repair costs. In the early 1960s, he arranged for the Philomel to tow her to New Island, where she still lies beached in the harbour below the settlement.

Jack Davis married Agnes Mary Janet Halliday in 1943: they had two children, Helen (b1945) and Raymond (b1948). During their ownership of New Island the Davis family were renowned for their hospitality. Among those they played host to were the crews of Russian whaling and intelligence vessels, who called there even during the Cold War. 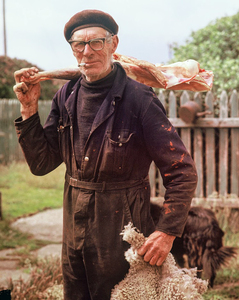 The most notable visit was in 1957, just after the world's first man-made satellite 'Sputnik', had been successfully launched. A Russian scientific vessel was based at New Island to track the satellite and receive telemetry data, so the Davis family were probably among the first people in the world, outside Russia, to witness these historic transmissions.

Jack Davis would always refer to himself as JJD, Cracker Jack, or Cracker - the last was what most people called him. He was a very hard-working man who also played hard. His heavy drinking bouts were legendary and would culminate at times with his standing, huge hands and feet outstretched and a fixed stare, exclaiming in a gruff voice 'Just the same old JJD ... hands, feet and manhood' before falling flat on his face. 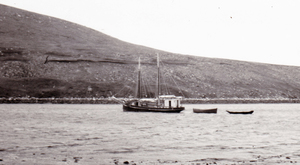 M/V Penguin - once owned by Cracker...

He was known as the last of the Falklands pirates, famous for flying the Jolly Roger from the masthead of vessels under his command. Greenhorn lads, serving their first voyage with Jack, would be surprised at the lack of victualling for the crew. Apart from black coffee, tea, bread, dripping and tobacco, there was nothing else until the first port was reached, where he would liberate a mutton carcass or two from the farm meathouse and anything else, such as eggs or vegetables, that might come his way. The boat might call at an uninhabited island, where some sheep would be rounded up and loaded on board. When asked the name of the place, the answer would always be 'Green Island, ché' and when they discharged it would be 'Hummock, ché'. At times he was known to re-load part of a recently-discharged cargo of timber during the night, either to deliver to Hummock or sell on to some unsuspecting farmer.

People in camp generally turned a blind eye to his exploits, as he could always be relied on to keep to a schedule, which was crucial, especially with mail and basic supplies.

Jack Davis was certainly a colourful figure, whose exploits acquired a legendary status around the Falklands. He was a folk hero to Stanley boys, who used to compete for the privilege of rowing him back to his vessel after a heavy drinking session in the Globe. His buccaneering ways were admired or disapproved of by his contemporaries in almost equal measure and his forceful personality made an impact on all who encountered him. 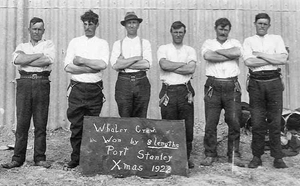 He died on 30 September 1969 and is buried in Stanley cemetery.