sheep-farmer, was the second of five children of Donald Cameron and his wife Flora, née Kemp, of Gairloch in Ross-shire. His parents later moved to Dumfriesshire, where his father was a gamekeeper on the Drumlanrig Estate. As a young man WKC also trained as a gamekeeper, but in 1867 he was recruited by the Falkland Islands Company, who had an agent in Dumfries. Poor economic prospects in Scotland sent many young men from this part of the world overseas in the nineteenth and early twentieth centuries and they formed a large proportion of the Company's workforce, easily adapting to the landscape and climate of the Falklands. The minutes of the FIC London Directors meeting of 29 May 1867 record the submission of an Agreement with 'William Cameron, Storekeeper and Teacher for Darwin Harbour'. WKC sailed from Swansea early in June 1867 on the barque Epsilon, which also carried seven other passengers, a cargo of coal, and general stores. The cost of his passage (£18) like those of many other emigrants, had been paid by the Colonial Land and Emigration Commissioners, who were keen to encourage new settlers in the Colonies. The ship arrived in the Falkland Islands on 12 August after a voyage of 67 days. 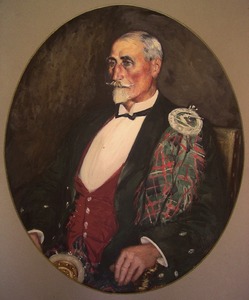 In April 1868, eight months after his arrival at Darwin, WKC wrote to his elder brother Norman, who had remained in Scotland, a description of his life in the Falklands:

I still continue to like this place well enough. There is not much society. There are about 12 wooden houses in the settlement of which I occupy one and the shepherds' houses are scattered up and down the camp...I very often take a turn out into the camp, of course on horseback. No one thinks of walking here. At first I was a very poor equestrian, but now I can ride like a gaucho...it is a very healthy country. I have not had a day's illness since I came.

Even at this early date, WKC's thoughts were already turning to the prospects for sheepfarming. He continues the letter 'I see that they are advertising farms to let. The sheep farming is not paying ...owing to the number of sheep that die every year with scab*. They lose about half of them that way'. He encounters William Wickham BERTRAND and his companion John Switzer, also investigating the possibilities: 'There were two men from New Zealand out here about a week ago, looking at the land. I think they are going to take farms. They crossed over here from Monte after crossing the Andes from Chilli.' 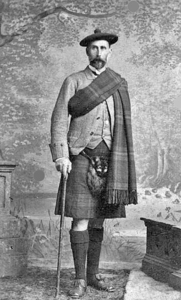 In 1871 WKC moved to Stanley at the request of FE COBB, the Company's young colonial manager, who had also arrived in the Islands for the first time in 1867, only six days before WKC himself. William Markham Dean wrote in his history of the Company that 'W.K.Cameron was ...a great favourite with Mr. Cobb from his first arrival'. In his annual report for 1871 Cobb recorded that 'I found it necessary to dismiss the [Stanley] storekeeper ... and to give the care of the store to Mr. W.K. Cameron from Darwin Harbour, a very intelligent and trustworthy man.'

In May 1875 however, Cobb had to admit to the Directors that storekeeping was not WKC's forte:

I feel it to be my duty to say that I think the Directors would do well to engage another Storekeeper for Stanley.... Mr. Cameron, as you know, came here as Darwin Storekeeper in 1867 and was promoted in 1871. With every desire to do his best, pleasant and genial in manner so that he is generally a favourite, an excellent sportsman and the best shot in the Falkland Islands, he yet lacks the ability to handle the store well and his previous training - he was a gamekeeper - was not calculated to fit him for such a sedentary post...In fact he was built for out of door pursuits and his occupation is anything but a congenial one to him.

An amicable parting of ways must have been arranged, as Cobb wrote again to the Directors in August 1875: 'Mr. Cameron on leaving the Company will join A. Petaluga and Mr. Smith in a sheep venture and has undertaken to purchase 1,000 sheep next autumn'. Edward Smith had arrived in the Falklands in 1873 as stipendiary magistrate. Andrez PITALUGA was one of the most successful cattle farmers in the Islands and held leases on extensive tracts of land in East Falkland. However, neither had experience of sheep-farming and it was to this that WKC turned his attention. He made his headquarters at Port San Carlos (then known as San Carlos North, or confusingly simply as San Carlos, which name was also used of the BONNER family's land on the south side of the river) and began to build up a settlement there. One of his first aims was to tackle the scab he had noticed at Darwin as being such a threat to sheepfarmers. Governor CALLAGHAN wrote in his Colonial Annual Report for 1877:

I regret to say that the ravages of scab were as usual very severe during the year.... I am informed that 'dipping' of sheep ...has become more general of late years... The dip most in use in the Islands ... is the 'tobacco dip'...it is, however, very expensive...Mr. Cameron has kindly given me the receipt of a dip prepared from lime and sulphur which he has used very successfully at the San Carlos Station ... where the sheep are reported to be exceptionally clean.

In 1878 Andrez Pitaluga died, leaving eight children and a widow, Margaret, who herself died the following year. Alexander Pitaluga, then aged 26, took over management of his father's estate, basing himself at Salvador. WKC gradually built up the sheep stocks at Port San Carlos and by 1881 the FIC estimated shipping 140 bales of wool from 'Smith & Cameron'. Around this time, WKC invited his nephew John Gibson Cameron, known as 'Jack' to come from Scotland to help with the farm. In 1884 Alexander Pitaluga sold the leases held by his family in the Port San Carlos area to WKC, who undertook to pay outstanding rent arrears. There were apparently accusations of improper dealings, because in 1887 Alexander Pitaluga and three of his siblings ratified the agreement in a second deed.

In 1891 WKC applied to purchase his leaseholds, but permission was refused by the new governor, GOLDSWORTHY, who had decided that government would retain some of the most valuable parts of the land formerly leased to, and developed by, the pioneering farmers, to sell to new applicants. This understandably incensed most of the existing leaseholders, who stood to lose the best of the land they had invested in, and WKC banded together with others to appeal to the secretary of state. Their appeal was allowed and Goldsworthy defeated, but farmers were still only permitted to renew their leases rather than purchasing.

In spite of his difference of opinion with government, WKC was made a JP in 1892. He continued to develop the farm. The Falkland Islands Magazine of February 1891 described the arrival of a freezer ship, the Hengist, at Port San Carlos with 'materials for the erection of killing and hanging sheds, cook-house and refrigerating works there'. Two years later the enterprise seemed to be developing well and the Magazine for June reported that:

The 'Hengist' left San Carlos for London on June 5 with her fourth cargo of frozen mutton from the Falklands. She had over 16,000 carcasses on board from the East and West Falklands. At San Carlos this season a Tryworks has been erected, thereby enabling the farmers on the East to have the offal boiled down, which had formerly been thrown on the beach.

Around this time WKC also purchased, in partnership with James Greenshields, an estancia in Patagonia, which he named 'Lochiel' after the Clan Cameron home ground in Scotland. He began exporting sheep from Port San Carlos to stock the new farm. In July of 1899 the Falkland Islands Magazine reported that 'The 'Albatros' arrived at San Carlos (N) on April 29th: she commenced loading at 2 p.m. and finished at 5 p.m., having taken on board 1340 sheep. She also took in 70 tons of water and left early ... for Camarones Bay.' (This was the site of Lochiel Station in Santa Cruz Province).

During the 1890s WKC began to hand over management of the farm to his nephew Jack, who had married in 1891 Frances Williams, sister of Louis WILLIAMS. WKC had himself married Ellen Maria, née Eddolls, of Bristol and four children, Donald, Alastair, Norman CAMERON and Una were born to them between 1894 and 1902 in London, where WKC now based himself. However he continued to visit the Falklands and Patagonia, where William Markham Dean encountered him. 'W.K.Cameron was a tall, fine-looking man...he was a great sportsman and a fine snipe shot. I was fortunate to travel with him up the Argentine coast to Camarones Bay in 1902 on a visit to his Lochiel Station, when he thrilled us with his tales of cattle killing'. In 1906 WKC applied to Executive Council for permission to purchase the land currently leased by him and, like many other Falklands farmers who also applied during that period, was finally able to buy the freehold.

After his retirement to England, he still visited the Falklands and continued to support local bodies such as the Stanley Sports Association and the King Edward VII Memorial Committee. He remained friends with FE Cobb and in 1919 helped him set up the Falkland Islands Battle Memorial Fund. In London he became a leading light of the Caledonian Society.

William Keith Cameron died in an accident at Knightsbridge Underground station on 6 December 1920.

The farm at Port San Carlos continued to be colloquially referred to as 'K.C.'- for Keith Cameron - after WKC's death. (Just as San Carlos, across the estuary, was also known by the owner's initials as 'J.B.' for Jack Bonner). The farm bale stencil remained as WKC until Port San Carlos was sold for subdivision in 1989. Cameron's Ridge and Cameron's Brook, named after the family, lie just south of the settlement on the other side of the San Carlos river.