government official, was born on 24 February 1843 at Longthorpe, Peterborough, son of Joshua and Alice Coulson. From the age of 14 years he had spent his life at sea. Although we do not know exactly when he arrived in the Falklands, he joined the Government mail schooner Foam as second mate in February 1864. In 1866 his life changed following an incident whilst he was walking along Ross Road, Port Stanley. The new governor, William ROBINSON, was landing at Goss's Jetty when the pilot boat in which he was travelling capsized. The governor was wearing a heavy topcoat and was close to drowning when Coulson, who had seen the incident, dashed along the jetty and saved him. The governor rewarded Coulson with a monetary gift and an offer of employment in government service which he accepted. He started work as office keeper and messenger on 1 August 1867. It was his subsequent appointment as government clerk with direct responsibility for the mail which led to him being revered by Islanders, for ensuring that their mail was handled expeditiously, and by philatelists for whom there is a permanent reminder of his work in the intricate designs of patterns cut in corks for the cancellation of overseas mail. The people on West Falkland, in particular, had good reason to be thankful for the caring and dedicated service of William Coulson. There was then no post office on the West and it was a strict official requirement that mail had to be prestamped before delivery. He ensured that nothing was delayed, often paying for postage without reimbursement. 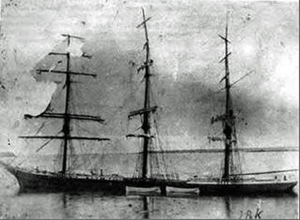 He was a caring father as well as being an outstanding civil servant. Following the death of Elizabeth the children were brought up by the Hockings at Cape Pembroke Lighthouse where James HOCKING was the keeper for many years. It was during this period that Coulson's son Charles distinguished himself by his bravery in riding through the height of the storm to Stanley, a distance of seven miles, to alert the authorities that an American ship John R. Kelly had been driven on to the rocks and was likely to founder. The steam launch Sissy put to sea and after several hazardous attempts rescued the crew. The President of the United States ordered that presentations be made to the Captain of the Sissy and his crew in recognition of their bravery. Charles appears to have been omitted from the awards although the American Consul wrote: 'I cannot exaggerate the conditions and the darkness caused by the wild storm. It was terrible and no reward is too much for this noble boy'. Charles made the journey in one and a half hours facing death through falling over the steep banks into the Bay or on to the rocks. 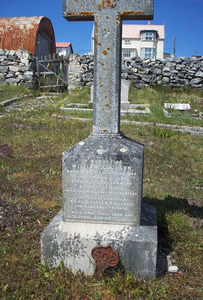 Coulson had been allocated living quarters in the Secretariat, an unprecedented concession, but the strain of an excessive work load and the constant attendance night and day on his sick son William took its toll. He had left his sick bed to attend his son's funeral and this hastened his own death on 21 August 1899. The Falkland Islands Magazine (FIMCP) wrote:

Mr. Coulson's death is deeply regretted by, one might say, the whole Islands; he had ever been most courteous and attentive to everyone who had anything to do in office; though his work was supposed to be more than equal that done by any two other Officials and his hours exceptionally long, yet he was ever ready to oblige the public even against the regulations which from time to time were issued with an eye more to the convenience of the Officials than that of the public.

They concluded the piece by declaring that the government would find it hard to fill his place. It is sad that at the age of 56 when he was looking forward to a well-earned pension he should die in the very week that two lady clerks were assigned to him to help during mail weeks. A public subscription was raised to erect a memorial to him in Stanley Cemetery.