official and philatelist, was born at Tetney (Lincs) and baptised on 24 September 1844, the son of Thomas and Mary Travis of Westfield Farm.

He worked for two firms in the City of London, before going out to the Islands in the employ of the Falkland Islands Company and in 1868 wrote to his mother that he hoped: 'the Directors are as well pleased with me, they ought to be - for I have done far better than any of my predecessors and am worst paid'. 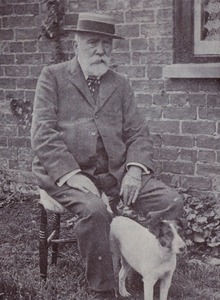 In February 1870 Governor  ROBINSON wrote to London, recommending Travis for the post of financial clerk: 'Mr. Travis is a person of whom I entertain a very favourable opinion. His manners are gentleman-like and prepossessing, he is intelligent and I believe a very good accountant'.

In the Colonial Office list of 1877, he is shown as colonial treasurer and acting colonial secretary with a salary of £375 pa.

The following year he returned home with the title 'Honourable', following service on Exco, and named his house in Tetney, 'Falkland Lodge'.

In May 1977, the philatelic auctioneers, Harmers of London, received various letters from Travis to his mother, two of which bear the rare FALKLAND ISLANDS PAID 'frank' in black of 1869 to 1876, and others from England to Travis when he was residing in the Falkland Islands and yet more from the Falklands to him when he had returned to Tetney. 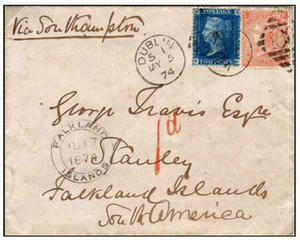 A cover to George Travis from Dublin...

See:  The postal history of the Falkland Islands between 1827 and 1945 - by Mike Roberts FRPSL