In 1866, at age twenty, together with his younger brother Edward and two Yorkshire men - William and Bernard Stickney, Baillon chartered a sailing vessel and set off for South America to find somewhere to settle. 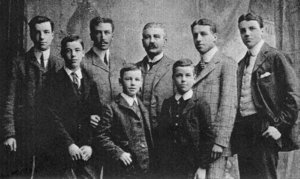 15 Colonist and sons: only Alexander...

After visiting several places along the coast of South America they acquired 78,332 acres of land at Fox Bay on the island of West Falkland. The family lived under their overturned boat while building their first residence, a building that still stands and is used by the Edwards family, current owners of the property, as a tractor shed.

Baillon married Mary Julia Isobel Williams, daughter of Charles Henry Williams, a Weddell Island sheep rancher, on 28 March 1876 in the Church of Our Lady Star of the Sea in Stanley. The couple were married by Fr. James FORAN. 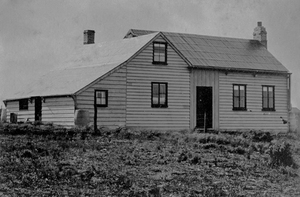 The family returned to England in 1888 on board the “Ramses”. In the same year the Baillon's share of the Fox Bay property was sold to Bernard Stickney, and the family returned to England. However Louis obviously maintained some connection with the Falklands as it is noted that, when St Mary's Church in Stanley was blessed in 1899 by Father Patrick O'Grady, it was under the sponsorship of Mr Louis Baillon who had contributed to the church construction. 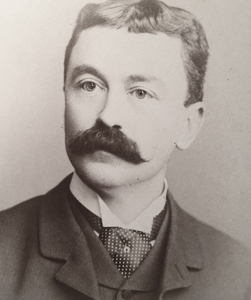 After his return, he was employed by a bank in various places in southern England. In the 1911 England Census Louis was recorded as living in Lancashire, England. When their son, Gerald, was killed in action 25 September 1915 Louis and Mary were living at 53 Kind Edward’s Grove, Teddington, Middlesex.

Following the death of his wife in 1924 he moved from Teddington in south-west London to Ventnor, Isle of Wight, where he died on 27 January 1926.

The family's name is always pronounced 'Ballion' in the Islands.

1. From the National Archives of the Falkland Islands - details  of Louis Augustin 's father: Louis Augustin Baillon (Snr) was born 25 August 1815 in St Souplet, France. Louis and his brother Alexis were lace manufacturers and Alexis moved to Nottingham circa 1840. Louis was married to Eliza Catherine Blake, the second daughter of Dr Blake of Nottingham, on 25 July 1841 in Nottingham, England. Eliza was born in in 1917 in France to French/Irish parents. In 1844 Glover’s Directory of Nottingham listed Louis as having premises on High Pavement, a prominent address in Nottingham’s lace market. In 1862 Louis was living on Castle Gate and is also listed as Vice Consul of France. Circa 1870 Louis purchased Woodthorpe House on Mansfield Road, Sherwood, which was built circa 1800. In 1880 he sold Woodthorpe House and moved his family back to Nottingham to 1 Newcastle Drive, The Park. Louis and Eliza are recorded in the England 1851 and 1871 census as living in Nottingham. Louis died 14 November 1885 in Basford, Nottinghamshire and is buried in the graveyard of All Hallows, Gedling. The gravestone reads: Baillon Louis Augustin born 25 August 1815 at St. Souplet (Nord) France died 14 November 1885 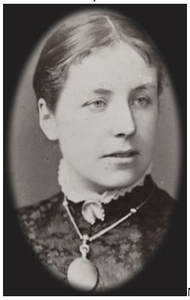 2. Louis Augustin Baillon's (Jnr) older brother - Andrew Edward Larvis Baillon (1844-1915) also spent some time in the Falklands and he served, at various times, between 1891 and 1896 as the Hon. Consul for Chile, Denmark, Germany, Italy, Norway and Sweden. Andrew arrived with his wife 14 September 1889 from Sandy Point on board the Neko”.  He took the place of Mr Langdon as clerk and was trained by Frederick COBB and was Colonial Manager of the Falkland Islands Company Limited from 1891 to 1898. Andrew and his wife departed 9 August 1899 on board the Neko.

3. Alexander Eugene Joseph Baillon born c. 1852 in Nottingham. He was a sheep farmer. He took on the management of Speedwell Island for three years from July 1874 for the Falkland Islands Company Limited. In August 1878 he was granted a 21 year lease of Speedwell, George and Barren Islands. He died 7 October 1879 at Fox Bay, West Falkland Islands of chronic cystitis, age 28, and is buried in Stanley cemetery. In his will he left his entire estate to his father. 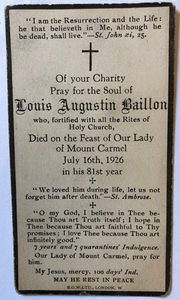 See: The Baillon Family in the Falkland Islands - National Archives