actor and colonist, was born in St John's Wood, London on 20 February 1847 the son of George Herbert Lewin, an affluent barrister and Mary, née Friend. By the time he was sixteen, Terriss (to use his stage name) had parted company with four schools; he then joined the merchant navy - that lasted two weeks. Always a practical joker, he successfully masqueraded as Prince ALFRED on a brief visit to Brighton - a foretaste of acting triumphs to come. Terriss then tried tea-planting in Assam - for a few months. Back in England his first professional engagement was at the Prince of Wales Theatre, Birmingham during the 1869-70 season. His part was unpaid but gave him the chance to show off his considerable physical strength and dash. He next persuaded the distinguished actor manager Squire Bancroft to give him a role. 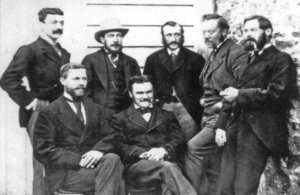 Terriss was a brilliant horseman and swimmer (on several occasions he actually saved lives). When swimming at Margate, he was admired by a young woman called Isabel Lewis; a walk on the promenade followed, but Isabel was due to catch the 3 pm train back to London. Terriss put his own watch back a few hours and persuaded her that the station clock, showing 5.30, was wrong. They were married soon afterwards: she was 21 and he was 23: an idyllically happy marriage

Since his acting career did not appear to be making progress, Terriss decided on a characteristically adventurous move to the Falkland Islands. He had been introduced to the PACKE Brothers who were farming sheep in the undeveloped West Falkland. Undeterred by his total lack of experience of farming, by the primitive conditions in the Islands and by his wife's pregnancy, the Terrisses set sail in the autumn of 1870. After being confined to their hotel in Montevideo by a yellow fever epidemic and a revolution, the family embarked in the schooner Foam and encountered one of the southern ocean's terrible storms. The ship nearly foundered. Their daughter maintained that her parents discussed whether to drown together or whether William should shoot Isabel and then himself. Terriss behaved with great courage through the ordeal, which was compounded by a shortage of food and water, until eventually they made landfall in the Falklands. 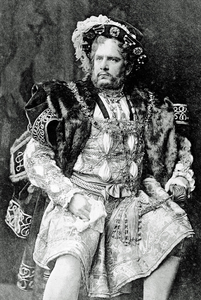 Sheep farms in West Falkland involved camping, so his wife had to stay in the settlement at Stanley. She did not like this, nor the way of life. Her daughter Ellaline TERRISS was born on 13 April 1871 and Governor D'ARCY stood as godfather. The family had been five months in the Islands, but the advent of the baby enabled Isabel Terriss to persuade her husband to leave two weeks after the birth. In any case it is doubtful how far he was committed to life there - a letter to his sister on arrival makes it clear that he was thinking of a move to South Africa.

The passage home was not without incident: the crew mutinied and it was William Terriss's negotiating skills which brought about a reconciliation between crew and captain. The latter resented Terriss's role and deprived the family of food - they had to slaughter a goat (which the governor had given them to ensure fresh milk on board). 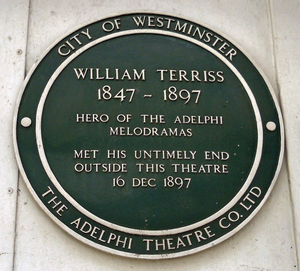 Terriss' plaque outside the Adelphi...

After an unsuccessful stay horse breeding in Kentucky, the family settled in England in 1872 and Terriss's career finally did take off at the Lyceum. His talent, charm, good looks and considerable stage presence ensured his success playing romantic heroes. He was by no means an intellectual actor, but, like his daughter, supremely good at what he did and much loved by the public. Sadly the career of 'Breezy Bill', as he was known was cut short on 16 December 1897, when he was murdered by a deranged actor, Richard Prince. The country mourned; fifty thousand people lined the route to the cemetery; and the Prince of Wales was among those who sent a wreath. William Terriss died at the height of his powers.