actress and singer, was born on 13 April 1871 in Stanley, the daughter of William Charles TERRISS (an actor whose real name was Lewin) and his wife Isabel, née Lewis, whose stage name was Amy Fellowes. Ellaline was born in The Ship Hotel, later the Upland Goose Hotel, and her autobiography claims that a plaque on the door of the hotel read: 'In this house the great actress Ellaline Terriss was born'. 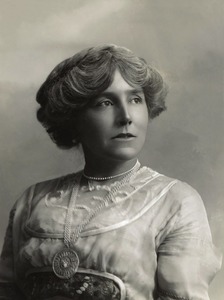 Her father had taken his wife to the Islands at a time when his career as an actor was not prospering, to try his hand at sheep farming, going into partnership with Captain PACKE. Unfortunately Isabel Terriss disliked life in the Islands, and the advent of a baby daughter enabled her to persuade her husband to leave when Ellaline was only two weeks old.

Her mother's views must have been responsible for the bizarre description of life in the Islands in Ellaline's autobiography A Little Bit of String. Her mother, she wrote:

was one of the very first white women to go to the Falkland Islands - in an unofficial capacity - and the natives went quite wild about her. They insisted on crowning her with tufts of grass and they declared her a queen. They remembered Queen Victoria and they qualified the statement by proclaiming her Queen of their hearts. 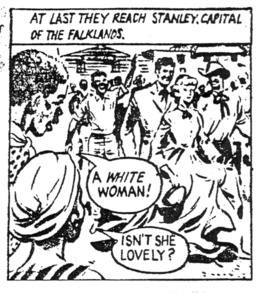 And later describing her christening:

Everyone who was anybody was there, which meant everyone from the Governor (Colonel D'ARCY) and his wife and as many of the natives who could get time off, which meant most of them.

It is impossible to reconcile the account which Ellaline, or her mother, gave of the excitable natives, with the stolid British townsfolk of Stanley. None of their family ever returned to the Islands.

William Terriss made a brief foray to Kentucky for horse breeding, but this failed and the family returned to England at last in 1873. His acting career finally took off and from then on his success was assured. Ellaline was not a stage struck child, despite meeting such luminaries as Ellen Terry and Sir Henry Irving. However to please her father she acted in a one-act play at home and was summoned to play the same part in the West End.

Terriss was not quite seventeen and her career was launched. Possessed of beauty, charm and confidence, she came to epitomise the Victorian and Edwardian comedy actress playing in farce, music hall, melodrama and eventually the cinema. She played in most London theatres, but her name was particularly associated with the Gaiety.

Ellaline Terriss and her daughter,...

In 1891 she met a young actor named Seymour Hicks (1871-1949) who proposed to her eight days later. Refused permission to marry by her father, they eloped. The wedding was less than romantic. Two witnesses, slightly drunk, were plucked off the street for a fee of half a crown each, and the wedding breakfast - for two - was Irish stew and Burgundy.

Their 56 year marriage was extremely happy: Hicks was fortunately as talented as his wife. They often acted together and she frequently played under his management. Ellaline coped admirably with her husband's occasional fecklessness and his roving eye, knowing his ultimate loyalty was to her. Their only surviving child Betty was born in 1904. 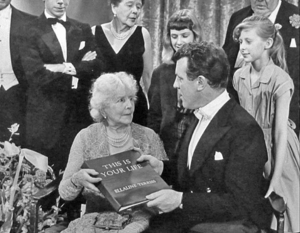 Lady Hicks being presented with 'The...

The pair continued their busy careers, touring the world and going abroad to entertain the troops during both World Wars.

Ellaline made recordings of her most popular songs and later took part in two films. In 1935, she retired from the stage and Hicks was knighted later that year. Ellaline Terriss's ability to exert a soothing influence on turbulent players caused her to be nicknamed 'the Oil Can'.

Terriss  wrote her first autobiography Ellaline Terriss by Herself with Others in 1928 and Just a Little Bit of String (after the title of her best loved song) in 1953.

In her fifty-year career, she met everyone from Marie Lloyd to Noel Coward, and in her books everyone is praised - given her temperament it could hardly have been otherwise. She never aspired to be a great actress in the mould of Bernhardt or Duse, but she was supreme in her chosen field: that of musical comedy. 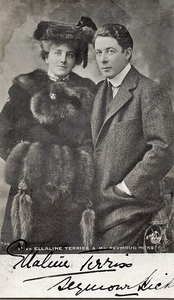 Lady Hicks died in Hampstead, London on 16 June 1971, a centenarian.

See: Photo and information about Hicks and Terriss' home at "Quality Street"