king and royal visitor, was born at Marlborough House, London on 3 June 1865, the second child of Edward, Prince of Wales (later King Edward VII) and his wife Alexandra.

He was baptised George Frederick Ernest Albert. With his elder brother ALBERT VICTOR, he visited the Falkland Islands on 24 and 25 January 1881 during a world cruise in HMS Bacchante.

For the first 26 years of his life he did not expect to succeed to the throne, and it was only the unexpected death of his brother in 1892 which made him heir apparent to his father. He had enjoyed his naval education and served in the Royal Navy until 1892. In 1893 he married Princess Victoria Mary (May) of Teck, later Queen Mary, who had been betrothed to his late brother.They had six children, among them two kings, Edward VIII and George VI. After the accession of his father in 1901, George was invested as Prince of Wales and took on increasing royal duties. 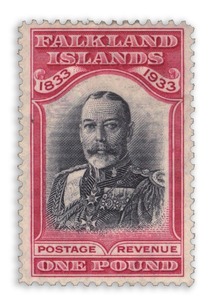 In a reign which began with political turbulence at home and saw the British Empire facing the strenuous challenge of World War I, it cannot be expected that the King would have been much concerned with the Falkland Islands, a remote corner of his vast dominions. But in 1915 he certainly discussed the Battle of the Falkland Islands with Governor ALLARDYCE, telling him, on the latter's return to London: 'You had a very narrow shave, much narrower than you may probably have been aware of'.

The King was an enthusiastic and knowledgeable philatelist, and postmasters in the Falkland Islands and on South Georgia were well aware of his interest in the hobby. In January 1928, when the stock of ½d and 2½d stamps held on South Georgia was exhausted, authority was given to surcharge the 2d with a 2½d (the foreign surface rate) with a locally produced handstamp. The handstamp was made at Leith Harbour and a total of 1179 were surcharged. The Postmaster in Stanley instructed his counterpart in South Georgia to 'preserve about 8 ... and a block of four for HM King George V.' 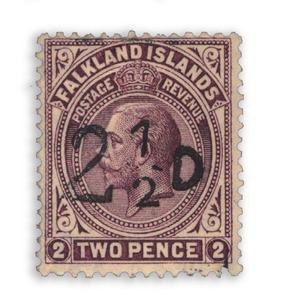 151 Preserved for the King.

In 1933 the Falkland Islands celebrated the centenary of British administration of the islands and a set of stamps was produced to celebrate the occasion. The designer of the stamps was George ROBERTS, the Colonial Engineer. The King personally approved the designs, but he rejected the image of himself chosen for the £1 value. At his insistence the design that was eventually used depicted him in the full dress uniform of the Royal Highland Regiment of the Black Watch.

In a reign of 26 years he had guided Britain and her Empire steadily through the strains which followed relative economic decline, colonial restiveness, world war and the rise of competing states. The visit of the future King Emperor to the Islands in 1881 is now almost forgotten and the large official portraits of George and Mary have been moved from Government House to the Museum in Stanley. 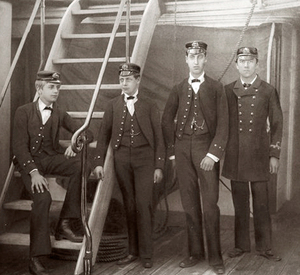