explorer, was born in Banbridge, Co Down, in September 1796. He was the fifth son of George Crozier, attorney-at-law, and Jane, née Graham. Crozier entered the navy in June 1810, joining the frigate Hamadryad. In June 1812 he joined Briton in the Channel Fleet for a time, then - during the brief war with the United States - went to the Pacific in quest of the USS Essex; while there they found the descendants of the mutineers of the Bounty, and one of the actual mutineers, living on Pitcairn Island. 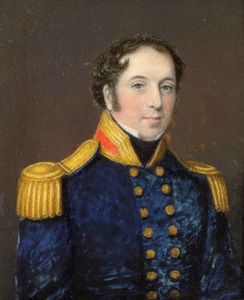 In February 1816 Crozier joined Maeander, which was refitting in the Thames. Then followed fifteen months in the Queen Charlotte, and April 1818 found him on board the sloop Doterel employed on the St Helena and Irish stations. In January 1821 he volunteered for the Arctic expedition fitting out under Commander WE Parry, for a further search for the North West Passage, joining the Fury, bomb vessel*, in March. They spent two winters in the Arctic carrying out scientific observations and forming a close relationship with a tribe of Eskimos. In January 1824 he was appointed to the Hecla, bomb vessel, again under Parry, for a similar expedition. They spent one winter in the Arctic, but the loss of their sister ship, the Fury, and unfavourable ice conditions, led to their early return to England. In March 1826 Crozier was promoted to lieutenant. Some months later he rejoined the Hecla, once more under Parry. The object of this next expedition was that a party should attempt to make their way on foot across the ice from Spitzbergen to the North Pole. Crozier remained with the ship making a series of astronomical and magnetic observations. In May 1827 he had been elected Fellow of the Astronomical Society.

An appointment to the new frigate, Stag, came in April 1831. They were employed mainly in Portuguese waters, but there were brief periods on the Home station, and a short visit to West Africa. In December 1835 he volunteered to accompany his old messmate James Clark ROSS, in the whale ship Cove in the capacity of first lieutenant, on a potentially hazardous mission in search of some missing whalers who had been caught in the ice in Davis Strait. For his services in this expedition he was promoted to commander in January 1837. 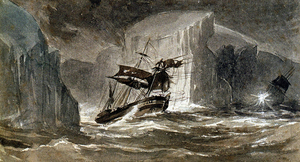 From May 1839 until September 1843 Crozier was employed in command of the Terror, bomb vessel, again under Ross, in a voyage to the Antarctic for the purposes of magnetic research and geographical discovery. They circumnavigated the continent, and made three attempts to approach it, but on each occasion were unable to land on the mainland. In 1842 the ships wintered at the Falkland Islands; the opportunity was taken to repair the damage they had sustained in an earlier collision, and to refit them generally.

The day of their arrival proved to be a memorable one for Crozier. When they anchored in Berkeley Sound on a blowing dirty afternoon there was much disappointment on board as no mail had arrived for them; however, Governor MOODY had very kindly sent off a recent copy of the Navy List which showed that Crozier had received the all-important promotion to post captain; this was the result of a very strong recommendation from Ross. One useful thing Ross and Crozier did during their stay was to assess the relative merits of Ports Louis and William for chief port of the colony; they reported in favour of the latter. Otherwise their routine was to live on shore at the newly-erected observatory from Monday morning to Saturday night making observations, returning on board on Sundays to relax and conduct divine service, as no readings were taken on that day. At this time Crozier was unfortunate enough to lose the services of his first lieutenant, Archibald McMurdo, through invaliding; he was the only officer in the ship with previous experience in ice navigation. One of the mates, Thomas  MOORE, was destined to return to the Islands as governor in 1855. 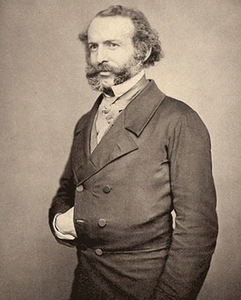 During the expedition Crozier had been making a collection of bird skins from Porto Praia, the Kerguelen Isles, Tasmania, New Zealand, the Auckland Isles, Campbell Island, Cape Horn and many places within the Antarctic Circle. Now specimens from the Falklands were added, and the whole, comprising nearly 150 species, was packed up and sent off to the Belfast Museum. At the end of the commission Crozier returned to Ireland. He was elected Fellow of the Royal Society in December 1843.

In March 1845 he was again appointed to the Terror for yet another attempt to find the North West Passage led by Sir John Franklin. The ships were last seen by a whaler in Baffin Bay in July, then totally vanished. By the end of 1847 concern for their safety began to mount at home, and, over the next few years a number of search expeditions, both official and private, were dispatched to the Arctic, but no trace of the missing explorers could be found. 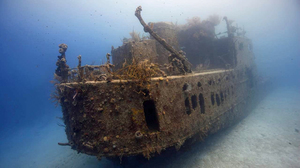 The sunken hull of HMS Terror -...

Eventually, in 1854, Dr John Rae, of the Hudson Bay Company, recovered some crested silver and other relics of the expedition from the Eskimos which gave a strong clue as to the particular area where the tragedy had occurred. In 1859 a private expedition sent out by Lady Franklin, under the command of Captain FLMcClintock, recovered the record left by the crews on King William Island after they had abandoned the ships in April 1848. It disclosed that Sir John Franklin had died in June 1847, thereby placing Crozier in overall command, and that they intended making their way home overland.

None appear to have succeeded in getting further than the extreme northern edge of the North American continent. However, in doing so, they completed the missing link in the North West Passage via that particular route. Crozier is remembered in Stanley by Crozier Place at the eastern end of Ross Road.

Editorial comment:  Contrary to the claim on the memorials to Sir John Franklin outside the Admiralty building, in Whitehall, and also on the memorial in Westminster Abbey, that Franklin discovered the route through the Northwest Passage -  it was John Rae's discovery of the strait (now called the Rae Strait) which was the last link in a navigable Northwest Passage from the Atlantic to the Pacific Oceans, which was successfully used by the Norwegian Roald Amundsen in 1903-06.

See:  Voyage of discovery and research in the Southern and Antarctic regions 1839-1843

James Clark Ross; A Voyage of Discovery and Research in the Southern and Antarctic Regions, During the Years 1839–43; John Murray; 1847