merchant and colonist, was born at High Wycombe, Bucks, on 4 September 1815, the eldest son of John Dean and his wife Frances, née Markham.

He was orphaned at the age of nine and brought up by his aunt Sarah Croft (née Dean), housekeeper to George WHITINGTON. His sister Mary died in infancy and his brother Ralph was lost at sea.

Dean was employed as foreman/clerk to John Bull WHITINGTON and landed at Port Louis on 17 November 1840 with his wife Charlotte, aged 23 and two children. John Bull Whitington, brother of George had emigrated to the Islands in the brigs Susan and Mary Ann to start a fish curing business with other settlers and all the requisites for the colony. The business was a failure and they started farming sheep and dealing in cattle hides. By 1 April 1842 Dean was acting as agent for Whitington who had returned home temporarily, and in October 1845 he was the government auctioneer in Stanley. The 1851 census gives his occupation as storekeeper. As Lloyds Agent in 1860 he was purchasing wrecks from the government and from this business he expanded his interests and bought what is now the West Store and Marmont Row (including the Upland Goose Hotel). Most of the inhabitants placed their business with Dean to the irritation of the Falkland Islands Company, which had received its Charter in 1852, and there was great rivalry between the two. As one of the leading citizens in Stanley he petitioned the Governor on behalf of the inhabitants against a measure designed to surrender control of the wild cattle into private hands as the 'petitioners look upon the herds...as a birthright and their only safeguard against a possible monopoly of the principal article of consumption'. In 1861, wishing to expand his activities, he applied for a lease of Pebble Island at £20 a year for 20 years. Before it expired, the Government allowed him to purchase the island for £400 in 1869. There followed the acquisition of Port Edgar in 1885, the purchase of Chartres with Mr Anson in 1886 and Port Stephens in 1892. In 1870 he was offered a seat in the Legislative Council. 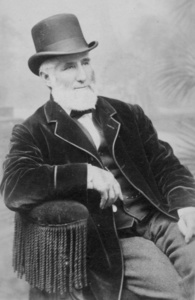 116 The patriarch in retirement.

To ensure that his business and properties were kept well supplied Dean bought a succession of sailing vessels, among them the Sea Witch, Selton, Irene, Allen Gardiner II ( renamed Richard Williams), Dennis Brundrit, Orissa and Karina Kirsten. In 1882 the German Kosmos line obtained a contract to run the mails to the West and Dean, not to be outdone, purchased the steamer Ranee eventually taking over the mails in 1885.

John Markham Dean died at Stoke Newington in England in 1903 after a lifetime devoted to the expansion of his businesses and the development of the Islands to the considerable benefit of his fellow citizens.