landowner, was born in 1888 in the Falkland Islands, the eldest son of John Hall DEAN and Eliza, née Thomas. He went to school in England followed by agricultural college in Cumberland before returning to the Islands. He left again in August 1915 to join the Royal Field Artillery and was commissioned as a Second Lieutenant in January 1916. When his father died in 1920, he took over the running of Pebble Island Station and its attendant islands together with his younger brother John Wycombe DEAN. In 1927 he engaged as manager of Pebble AG BARTON who took over from John Betts and stayed until 1944 when he was succeeded by Willie Betts. 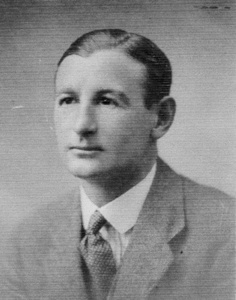 On 22 September 1922 Dean sent the first radio message from a private owner to the governor via Fox Bay requesting '...permission to continue (using the radio great benefit if granted. At present, boat, horses, landline necessary; (in) unfavourable conditions perhaps a week'. The colonial secretary replied on the same day authorising 'the full use of facilities' through Fox Bay - a message which was received on Pebble five minutes after transmission thus opening up a new era in communications in the outer islands. The transmitter was powered by pedalling whilst transmitting Morse code. The ex-fishing vessel Gentoo,purchased in England in 1926, was also fitted with a radio so that communication could be kept up while shearing on the outlying islands. In 1929 the Jasons were purchased from Hansen. Dean married Evelyn Challis in 1928 and with the birth of their two children, Jean (b1930), and Christopher (b1934), he spent less time in the Islands.

During World War II he acted as an air raid warden in his home town of Tunbridge Wells, Kent. He subsequently visited Pebble alternately with his brother for several months each year after the war. He died in 1954 in Tunbridge Wells.