colonist, was baptised on 12 July 1817 at West Clandon, Surrey, the fourth son of Peter Whitington of Whitmore Hall, Guildford. He was trained as a chemist. In October 1840 funded by his brother George T WHITINGTON, he left for the Falkland Islands in two of his brother's brigs, the Susan and the Mary Ann, with a party of 16 colonists, two children, 12 sheep and two pigs. He intended to settle there and take over the land purchased by his brother from Captain LANGDON (who had been granted it by VERNET). 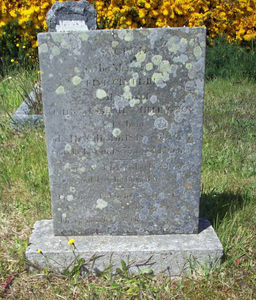 The gravestone of the Whittington...

On 17 November 1840 the party arrived. The enterprise got off to a bad start when the master of the Mary Ann, John Hartnell, took possession of her provisions and proceeded to sell them off to the colonists and visiting sailors. He later made off with the ship. Whitington asked the naval officer commanding, Lt THYSSEN, for ‘quiet possession’ of his brother’s land. Thyssen replied that he had no authority to put Whitington in possession of such lands. Notwithstanding, Whitington built ‘Falkland House’, presumably from material brought out from England, and established a fish salting plant. He employed ten people under a foreman John Markham DEAN. The fish salting appears to have failed; Whitington promoted some sealing, farmed the sheep and purchased cattle hides. In June 1841 Capt ONSLOW wrote to the Secretary of State that Whitington 'gives cheering accounts of the settlers and the climate, but unsatisfactory as regards the conduct of some of the people and the sailors arising from the absence of any regular government'.

Regular government arrived in the form of Lieutenant-Governor Richard MOODY in January 1842. When Moody wrote his major report in April he noted: 'the few sheep are in very fine condition especially some Leicesters and Southdowns belonging to Mr JB Whitington (a settler) which are in remarkably good order with long heavy fleeces'. But relations with Moody soon soured: in November Moody protested over Whitington's treatment of his employees, John Batchelor and his wife. Moody referred to the matter in a despatch which was printed in London: though Whitington was not named it must have been clear that he was the harsh employer referred to. The move of the seat of government to Stanley meant that Whitington was left with land of little value at Port Louis. Moody refused to refund the price of this land and told London: 'I have often expressed to Mr Whitington and others that we were doing nothing for our own maintenance and that I wished him to set an example in doing something beyond selling goods'. Whitington had implied that he would use 'other sources' (presumably in England) to obtain his rights. The bad feeling smoulders on in the official papers until almost the end of Moody's term. In June 1846 Moody wrote that Whitington headed 'a small party who are in constant opposition to the Govt. and who, too indolent or too indifferent to labour personally to maintain themselves, appear to be striving to make all around them as discontented and disaffected as themselves'.

But in November 1847 Whitington was appointed a JP and the following month he was made a cornet (second lieutenant) in the militia cavalry which Moody had formed. He was appointed to LegCo just before Moody was transferred in July 1848.

Whitington had remained in Port Louis after the general move to Stanley, but in 1849 he too moved to the new town and rented a large slice of land out to Cape Pembroke for grazing of milk and beef cattle. He became a keen rival to Captain PACKE for the supply of beef to ships' crews.

When Whitington arrived in the Islands he was accompanied by Sarah, née Hollamby, apparently his wife, who seems to have enjoyed poor health. In June 1842 Moody reported that only the presence of the James Clarke ROSS expedition with its naval doctors had saved the wife of 'a most respectable settler'. But their marriage on 16 September 1845 is reported in the Times to have taken place in Woking, Surrey, so they must have returned to England to regularise matters. Sarah had at least four sons: Stanley (b1846), Falkland (b1848), Anson (b1849) and Leicester (b1853). But none survived - a finely cut memorial stone in Stanley graveyard notes their deaths but does not name them. Whitington bitterly criticised the Rev James MOODY for failing to ride to Port Louis to bury one of his children, when the Chaplain was examined by ExCo in April 1852.

In 1853 he was replaced on LegCo by JP DALE; his remaining son died in October 1853 and he must have left the colony shortly thereafter. In the 1881 English census he appears in Nelson Street, Liverpool living with his wife in a house shared with two other families. He entered his profession as 'gentleman' but the enumerator has crossed this out and written in 'wholesale chemist'.

Whitington was not helped by his brother's pretensions and shady reputation, but he made a fair start as a colonist and might have achieved more if he had got on with Moody.